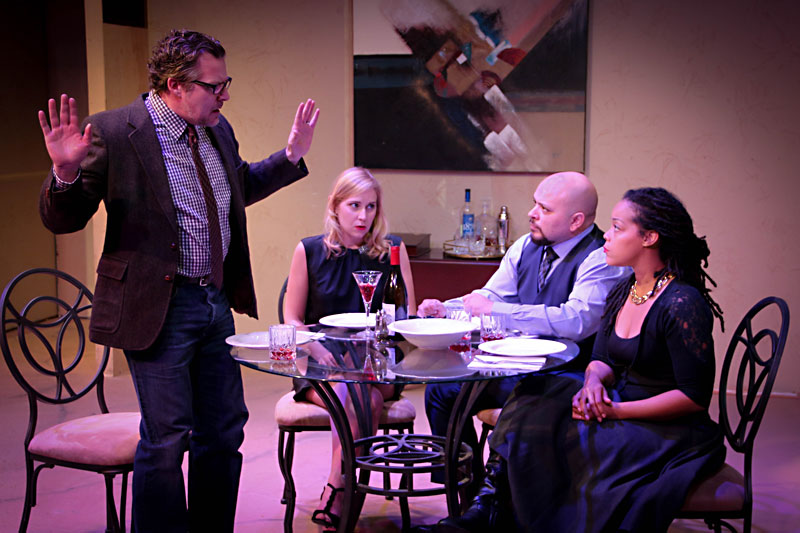 Too often in America, what we talk about devolves from the original subject matter into arguments over how we should be talking. Important topics like race, privilege, religion, etc., are frequently derailed by assumptions about who owns the conversation and through which lens we should be viewing the topic, until the original debate is no longer as important as our style of argument. With his 2013 Pulitzer Prize-winning Disgraced, now gracing the Austin Playhouse stage, playwright Ayad Akhtar perfectly frames his narrative to filter out such distractions, leaving us with a conversation so raw and powerful that we are forced to consider why we allow ourselves these distractions at all.

Artistic Director Don Toner realizes that the play's the thing with Disgraced. Given the controversy surrounding the script and its inclusion in the national conversation around color-conscious casting, I was worried the narrative might be too weighty for a production to bear. Toner trusts his actors to tell the story with little technical fanfare. Mike Toner's set places us believably in the New York City apartment of Amir (J. Ben Wolfe), a Pakistani-American attorney, and his wife Emily (Molly Karrasch), a painter exploring Islamic influence in art. Don Day's lighting and Joel Mercado-See's sound design complement the environment, immersing us in this reality without drawing focus. Wolfe engages honestly with his character, never shying from the difficulties of the subject: Amir was raised a Muslim but is now an apostate burdened with the attachments to his former religion, particularly when The New York Times takes an event out of context and makes it seem like Amir is in support of an imam. Wolfe's high-caliber performance raises the question of whether Amir is an Arab Uncle Tom or simply an American who has made a choice to disconnect from his religion. And as the well-dressed (thanks to Glenda Barnes' fashionable costuming) white wife engrossed in Islamic culture, Karrasch's luminescent performance asks if she's appropriating, engaging in Orientalism, or just a white body saying important things. Here, Akhtar needles his audience, forcing us to examine whether our own sociopolitical constructs might be getting in the way of the bigger picture. Enter Jory and Isaac, an African-American attorney at Amir's firm, and her husband, a Jewish art gallery owner who holds the key to Emily's artistic future. Rounding out the stellar cast is Harold Fisch as Abe, Amir's upstart and possibly militant nephew.

Akhtar constructs his characters carefully and in such a way that allows the conversation to move forward. Were this a script in which close friends pontificate on systemic racism over cocktails, it likely wouldn't hit the mark. But when all four characters sit down to a dinner with their own cultural crosses to bear, the nervous energy of those who don't know each other well takes over. Liquor flows, and lines are crossed. Michael Miller's Isaac is thoughtful and passionate, reading the room with grace and occasionally poking the hornet's nest for fun. Crystal Bird Caviel is absolutely captivating as Jory, challenging the status quo and refusing to allow preconceptions to steer her life. For better or worse, all characters walk away from this script changed, and it's a joy to watch the process.

Perhaps it is fear that allows us to distract ourselves from the argument. Fear of labels, fear of judgment ... perhaps even a fear of getting any actual work done. But as the lights raised and the opening night reception began, the lion's share of the audience stuck around, and I witnessed these very conversations being struck up among the audience and cast. Austin Playhouse has an important show on its hands, worthy of your time, thought, and the discussions it will undoubtedly inspire.