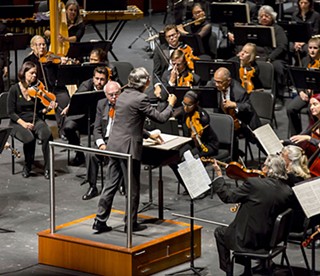 Music was the medium through which the Austin Symphony Orchestra transported audiences to Russia in its first concert of 2016, and yet the thing that kept providing me with the means to articulate the experience was literature. The event was not unlike an evening spent reading Chekhov and Tolstoy, alternating between short stories by the former and chapters of a novel by the latter: On the one hand, you had these tales of domestic life finely wrought in miniature, and on the other, these sprawling sagas of society spun with an epic sweep.

The program started small, with two movements from Winter Bonfire, a 1950 composition by Sergei Prokofiev in the vein of his popular music for young people, if not as well known as Peter and the Wolf or The Ugly Duckling. The full work includes a narrative – and even spoken text – about a group of Soviet youth on an outing to the countryside, but with music as illustrative as this, you didn't need the words – or even titles, really – to grasp what was happening. "Waltz on the Ice" was precisely that, a cheery melodic line twirling and twirling, one-two-three one-two-three one-two-three one-two-three, as sweetly and gracefully as anything by Johann Strauss. And "Departure," with its brisk tempo, jaunty air, and steady percussive beat like the clack-clack-clack of a railway car on the tracks, instantly communicated the sense of being on a journey, the landscape racing by. Over and done in a half-dozen minutes, these were orchestral sketches, but with conductor Peter Bay keeping the movement fluid and accentuating the playfulness of Prokofiev's instrumentation, they were sketches that charmed.

On the entrance of guest soloist Jennifer Frautschi, however, the scale of the music expanded considerably. In composing his Second Violin Concerto, Henryk Wieniawski, a skilled violinist himself, really loaded the piece with instrumental fireworks and romantic longing. And while Frautschi's dusky plum gown and relaxed stance initially suggested a rather demure demeanor, once she put bow to strings, she attacked the score with breathtaking speed and intensity. Flying through dizzying runs of notes, then drawing forth extended lines of deep wistfulness, then once more whipping up and down the scale in a frenzy – here frantic, there ecstatic – Frautschi conjured a character of immense complexity and contradictions, an Anna Karenina of the strings. Hearing the violinist work that 1722 Stradivarius was as entrancing as beholding Anna was to Vronsky.

The program's second half was devoted to Tchaikovsky's Symphony No. 1 in D minor, a work that begins modestly enough, as if it is, as the subtitle suggests, simply "Winter Daydreams" – as light and fanciful as those on which Clara drifts away in The Nutcracker. But the airiness and delicacy of this reverie soon gets overtaken by the blast and bluster of the orchestra in full storm: pounding timpani, ominous strings, blaring horns. In time, the tempest recedes, and the gentle snowfall of the opening resumes, but not for good. The work keeps swinging back and forth between the light and the heavy, the breezy and the booming, Chekhov's "The Lady With the Dog" and Tolstoy's War and Peace. Considering that this was Tchaikovsky's first symphony, that he was just 26 when he wrote it, and that he had such trouble completing it, it's understandable that the work seems at times to be in conflict with itself. But what was surprising about the ASO's performance was how cohesive it felt, how the orchestra finessed the abrupt shifts in tone and made them natural, all belonging to the same whole. Bay and company attended to the rapidly changing dynamics with such nuance that the short story and the epic novel fit together in a single volume. I might not often choose to read both at the same time, but in this case, the mash-up was worth it.

Dell Hall at the Long Center, 701 W. Riverside
Jan. 9
A version of this article appeared in print on January 15, 2016 with the headline: Book in the USSR