How could I not make such a resolution after having followed the directive of La Follia Austin Baroque to Start the New Year With Bach! at its inaugural concert of 2016? It wasn't simply that the 100 minutes of music by the 18th century übercomposer whetted my appetite for more of his wizardry at counterpoint and ornamentation (though it certainly did); it was also that the selections themselves spoke to the kind of changes we all talk about making with the turn of the calendar, changes in the way we live to make us better human beings.

For instance, the interplay between Baroque flute and violin in the "Affettuoso" from Brandenburg Concerto No. 5 called to mind a tender dialogue between sweethearts, with Marcus McGuff's flute dreamily cooing out a melodic phrase, which was echoed by Stephen Redfield's violin in sinuous sympathy, and then both repeated the phrase and embroidered on it with elegant harmonies. For anyone who has felt a need to be more attentive to and gentle in his or her exchanges with a loved one, this was an ideal to aspire to: a sweet and caring model for two individuals talking and listening to each other.

Then there was the "Largo e Dolce" and "Presto" from the Sonata for Flute and Harpsi­chord in B minor, with McGuff in a duet with La Follia Artistic Director Keith Womer. Here, the contrast in sounds between the instruments – the high and dainty filigree of the harpsichord against the rounded flow of the flute – suggested a conversation in which the participants were of quite different temperaments and perhaps from different backgrounds. The qualities that made each so distinctive would seem to put them at odds, a pairing destined to clash. And yet their sharpness and softness played off each other amenably, even comfortably, as if each recognized the other's strength or beauty and sought to be its perfect complement. Here, too, was a lesson for those of us struggling to find common ground with those unlike ourselves: If we acknowledge the value of the person who's different from us and address ourselves to that, there may be not just communication that comes from it but also something beautiful – a blended voice more striking than the sound of either voice alone.

The program's most moving selection was the "Ciaccona" from Violin Partita No. 2 in D minor, performed by Redfield, who unpacked trunkloads of emotion in the solo's dozen or so minutes – not surprising if you accept the legend that Bach composed the work following the death of his wife. Long notes, etched with such a sharp intensity, felt at times like the keening of a soul in grief and others like pangs of regret. These alternated with passages of fitful, frenzied runs of notes, suggesting a mind whirling to comprehend the loss with which it was faced. So intricate was Redfield's bowing and so fraught with feeling, that you felt drawn into the strings yourself, bound by the anguish spun from them. I can't say the performance left me with any clear resolution for the new year, but it certainly had me appreciating anew the power of pent-up feelings and the need to release them.

Then there were the assorted excerpts from Bach's Goldberg Variations, performed by Womer on the harpsichord, which paid tribute to the virtues of variety, of taking an idea and expanding on it in as many ways as you can imagine. Womer's playing, without losing any of the delicacy of the instrument's sound, managed to make each selection more ornamented and spirited than the last. I don't fancy myself a Bach by any means, but I was inspired to do more noodling with my own ideas, to be more exploratory and experimental in my work and see how far how I can push a notion. I resolve to do that and to be more kindly with loved ones and more accepting of those I don't know ... but first, I think I'll listen to a little more Bach.

Start the New Year With Bach! 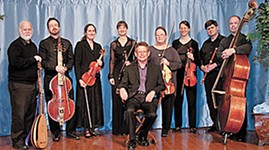