FronteraFest: The Place to Start 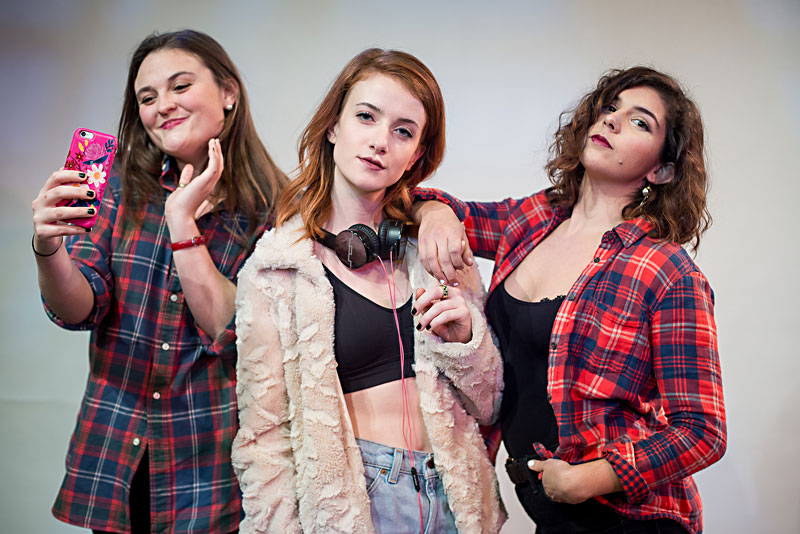 FronteraFest, now entering its 23rd year, has become a tradition in Austin's annual arts calendar. For years, Hyde Park Theatre and ScriptWorks' unjuried jamboree of performances has followed the same format: a Short Fringe featuring five short pieces per evening for five weeks; a two-week Long Fringe that offers a handful of one-act and full-length shows; plus some works in unconventional locations, including a full day devoted to such works (Mi Casa Es Su Teatro). But calling FronteraFest traditional might be misleading. The core of the festival has always been original work. Traditionally, it's been about trying out nontraditional things.

That's true for established artists and newcomers alike. FronteraFest provides an opportunity for playwrights, choreographers, improvisers, poets, and others to experiment with relatively little risk. Not only is the space and audience provided for all applicants, but the audience understands that they're trying out an idea. You might be brilliant, or not.

This year, the Chronicle talked to four artists who are new to Austin's stages and have chosen FronteraFest as a starting point for presenting work in this city. Their shows are set in a circus, a hospital, a hotel bathroom, and a neighbor's doorstep, and explore themes of self-discovery and redemption, life's transitions, perseverance, and the art of borrowing a few eggs. They share the clean slate of working largely without expectations within the local scene and the hope that the festival will launch a body of work in Austin.

Dick Satori brings "Monkey Off Back – Circus Still in Town!," a short semi-autobiographical piece, to Austin from Virginia, where he lives. He describes his show as "total theatre," drawing on his background in stand-up comedy, circus performance, street theatre, storytelling, and the kitchen sink to tell his story of recovery from drug addiction.

Satori found out about FronteraFest from another artist while performing in New York and decided to bring his show here. It seems "like a perfect fit for my style of theatre, and Austin has a really fun reputation," he says.

Satori plans to refine the show here, and "I am secretly scoping [Austin] out with possible plans of moving here," he says (not so secretly). "My whole life I've been told I'm weird, so I'm just saying I think I might be a good fit. I'm not assuming anything – just think I could make an asset of myself."

Jacobo Bergareche, on the other hand, already lives in Austin but is presenting his work here for the first time in this year's festival. Co-founder of a tech company by day, the Spanish playwright is presenting a one-act in the Long Fringe about a woman whose husband has been in an irreversible coma for years. She debates whether or not to finally pull the plug and move forward with her life.

"I had written the play during my summer vacations in Spain," he says, "and I wanted to produce it in Austin ... so I just made a couple of Internet searches and it took five minutes to understand that FronteraFest was the right place to make it happen."

Bergareche hopes to perform Coma in a hospital or hospice at some point, as "hospices and hospitals are powerful places where we see stories that really matter."

While Aaron Johnson has recently begun performing in Austin, his short piece "Life's No Way" is his first time to direct here. The play, which he cowrote with Anders Nerheim, takes place in a gender-neutral restroom at a high-end wedding venue, where brides and grooms play out their crises by the toilets.

Says Johnson, "I was very aware when I went to school for acting that a career as an employed actor is very hard to come by. I was told if I wanted work, I would have to make it. So to find a community that not only supports new works but has two months of the year dedicated to exploring new stories is an incredible prospect."

Stephen Bittrich brings to the Short Fringe "Two Eggs," his play about a neighbor with multiple personalities who attempts to borrow a couple of eggs. No stranger to the short play format, Bittrich has had several short works produced in New York and elsewhere. He moved here from NYC in 2014 and looks at FronteraFest as an opportunity to network and build bridges. "The first year was just about getting my bearings in Austin and making new friends," he says, "but now I'm actively seeking my 'tribe' here."

While Bittrich doesn't have lofty goals for "Two Eggs" beyond making people laugh and possibly earning a spot in Best of the Fest (the final week of Short Fringe performances featuring audience and crew favorites from the previous four weeks), he's interested in learning what other opportunities are available on the stage scene: "I'm really excited about the high quality of work being done in Austin and hope to be a part of it somehow. I know a lot of the local theatre companies do established plays. I'm hoping that more and more the local theatres will do new work."

For audiences, FronteraFest represents the chance to peer into one of the working laboratories of Austin, to see what strange organisms are growing there. That can mean seeing familiar faces trying something new, or catching first appearances by newcomers who may become mainstays of the scene.

Each year, the festival gives artists space to connect with audiences and with each other. It's all about taking the chance.