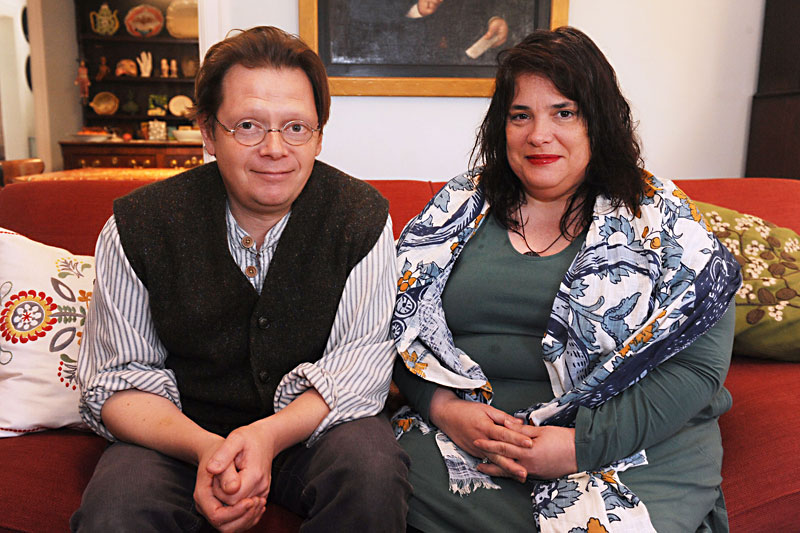 There are sooooo many creative people in Austin, as our citizens have been reminding each other since before Willie Nelson was a young man, and occasionally some of those people have joined forces, have paired up in an officially matrimonial fashion. For instance, here's Elizabeth McCracken and Edward Carey, a couple living in Austin's Hyde Park neighborhood.

McCracken is the author of several books, including the Story Prize-winning collection Thunderstruck & Other Stories; Carey is the author of several books, too, most recently a young adult series called The Iremonger Trilogy. As both these writers will be among the acclaimed panelists and speakers (with McCracken providing the keynote) at the Poets & Writers Inspiration event at the Blanton Museum on Jan. 9, we reckoned it's a good time to let you know a little about them – and especially how life as a couple affects their work and its process.


Austin Chronicle: How did you guys meet?

Edward Carey: We met in New York, at a party.

Elizabeth McCracken: It was at a Barnes & Noble party, and the nice thing was that we had read each other's work and really loved it. So there was none of that – which there so often is among writers – that moment of terror when you meet somebody you like and you know that they're a writer and you just pray that you like their work.

Carey: Yeah, that was good.

McCracken: We'd both been on record with friends, talking about having read this book by somebody that we thought was just terrific. Or at least I was, darling.

AC: Well, y'all are both such good writers – but so different, too, it seems to me.

McCracken: I think that's true, but many people say, when they've read our work, "Oh yes, that makes sense." But, yeah, I think we're very different.

Carey: And, I think, getting more different.

McCracken: That's true, actually. Those people were thinking of our first two novels.

Carey: Well, I was about to make a piece of sculpture in Boston. And Elizabeth was living in Boston then, and I was going to go up there to do the sculpture anyway – but I moved in with Elizabeth.

McCracken: It was about two weeks or something like that. We met, and there was a month when I went back to Boston, and Edward was traveling around. And then he came to Boston and we went out. And about two weeks later, he moved in.

Carey: And she hasn't got rid of me yet.

AC: What eventually brought you to Texas?

McCracken: The magnetic pull of the University of Texas. It's gonna be six years in January.

Carey: And I've just done my first semester as a tenured, ah –

Carey: Yeah, so it's been – it's worked very well.

McCracken: I applied for a job here –

AC: With the Michener Center?

AC: And so, Edward, you applied for a UT job as well?

Carey: Well, I taught – bits and pieces, here and there, between writing projects. I took up what UT offered me, but then they offered me more and more, and then they got me in full time. And I was teaching sometimes for the English Department and sometimes for the Michener Center. Elizabeth and I had taught together at the University of Iowa, the Writers' Workshop there, before we came here. Fortunately for me – so I had some sort of thing to tell them, about who this strange Englishman was without much education behind him. So it all worked out.

McCracken: And Austin is the place where we've lived the longest together.

Carey: We've lived all over the place. We lived in Paris for a bit, and we used to charge around – where else were we?

McCracken: Iowa City, a lot. A bunch of different places.

AC: So you'd done a lot of writing, your careers had begun – well begun – before you met. And had either of y'all been married previously?

AC: So, here you are – writing, your careers are already going, you've done that solo for a long time – and now you're together, now you're married. How has that changed your patterns as writers? I mean, when you do your work – or even how you do your work?

McCracken: What's changed is having kids. And my job at UT is the first permanent full-time job, teaching job, I've had – I used to be a librarian. So I used to work very late at night, by myself, and now I've gotten better at working, shutting myself into my campus office and working a lot. And I used to sort of binge write. Edward has much better writing habits than I do. He's got a, a real – you've got a work ethic. I don't have that much of a work ethic. [Laughs] Edward's quite inspiring.

Carey: Thanks, dear. I was sent to Naval School when I was young, and it didn't do me any good in any other form, but it made me get up in the morning. And before teaching, currently, full time at UT, I'd just finished these three young adult, kids' books, back-to-back. With a ton of illustration work with it. And the only way to do that is to basically use up every single minute of time when Elizabeth and the kids were out of the house. That was it, straight down to it. Because each book took about a year to do, which was asking quite a lot. And also the illustrations take about the same time as the writing. But, ah, you just make it work, you have to. I think there's no excuse, actually. It's really hard, though, when teaching at the same time. Because you have these students, and they're incredible, wonderful writing students – at the master's level and the bachelor-degree level – and to do the work properly as a teacher, you have to devote a ton of time to it. And so actually getting that to balance is the hardest, wouldn't you say?

McCracken: Yeah, I think that's true. And we also, we've been very careful, we're important readers for each other's work, but we don't read stuff in process.

Carey: We used to.

McCracken: We used to.

McCracken: It didn't turn out that well. [Laughs]

Carey: No, it was not a good idea.

McCracken: When I say "It didn't turn out that well," for me, I wrote a couple of books that I sort of ended up giving up on – but a lot of that was because we were traveling around a lot, too. But it has felt important, because we spend a lot of time together and we talk about a lot of stuff, for our work to have some sense of privacy while we're working on it. I rely on Edward's advice with my work, when I've finished it. But maybe if I knew he was gonna read it while I was working on it? I might try to write to him, you know? To write things that I knew that he would think were funny. Or avoid writing something that – I don't know what that would be, but ... [laughs]. But I'd hear his voice and try to internalize it while I was writing – and it feels really important not to do that.

Carey: And then you come to it totally fresh as a reader – which is the best way. An ideal reader is someone who doesn't know what on Earth you've been doing, who will look at it with absolute freshness and go, "Oh, so that's what you've been up to."

McCracken: The first book of his trilogy, he worked on it for a year. I think I had seen a piece of paper with the name Iremonger on it. And that was all I knew of it.

Carey: And that's definitely how I'll go on from now on. Each time a book's finished, or at least a draft's finished, then I'll give it to Elizabeth – and it's enormously helpful.

McCracken: And I've heard stories, and maybe you've interviewed other people who've said, "And then I finished a day's work and I read it aloud to my significant other" – and I can't think of anything more terrifying.

Carey: [Laughs] We wouldn't do that.

McCracken: And if something is in process, if I show it to somebody, I just want them to tell me – and this is particularly true if I keep it to Edward – I would just want him to tell me it was wonderful. When I've finished something, though, I can actually hear the criticism – and that's actually really important to me. But, in process, if there was anything he didn't like, I would, I would unjustifiably become wretched with him, probably.

Carey: I think that's right, yeah. Every new writing project, every new artistic project, needs to be protected so it can grow on its own before it begins to creep out into the world.

AC: Do you ever collaborate? Whether in writing, or maybe Edward does illustrations for Elizabeth's writing, or ... ?

McCracken: This is a terrible admission, but the one thing we collaborated on recently is, I agreed – for some reason, probably the influence of living with someone who is also a visual artist – I told a friend of mine, who was doing a project for a charity on Cape Cod, that I would do an artist's book for her. Yes, I am gonna make an artist's book! And I kept trying, and kept putting it off, and it was late. And I was walking around the house in a panic, going "I can't figure this out, I don't know what to do!" And Edward said, "Do you want me to draw you something?" And I said, "Could you just draw ... 20 grackles?" And in a single night, Edward drew me 20 grackles. And I put them with little aphorisms about grackles that I wrote. And I pasted them down, and I did do the title page myself – it was pretty pathetic. And that's been it for collaboration. Other than, ah – the human beings in the other room.

Carey: The human beings. Yeah, I think that's it.

McCracken: And the artist's-book collaboration, it was sweet and lovely, but it was also separate. He said "I'll draw whatever you want," and I was like, "Grackles, please." But, years ago I was at a writing festival – I think this was shortly before I met Edward, and there was a man and wife – husband and wife, there we go – a husband and wife who had collaborated on a piece of writing. And they got up to read it, and they alternated reading lines. And it was the most stomach-turning thing I've ever seen in my life. And I always think of that when I think of collaborating. And I don't know that we ever would.