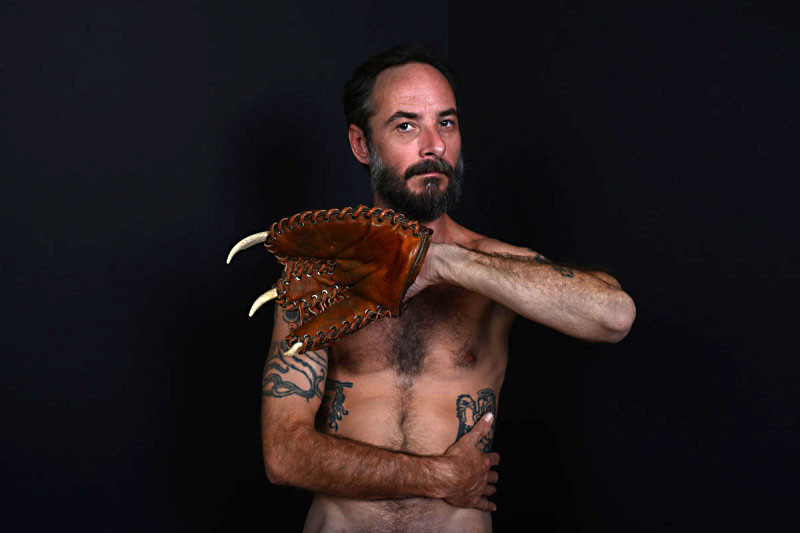 It's been a strong year for Alyssa Taylor Wendt. The artist's mysterious work was seen throughout 2015, in individual pieces or small groups at Northern-Southern Gallery, POP Austin, Art Alliance's Artbash, Co-Lab Projects screenings, and her studios during the East Austin Studio Tour. Crafting a solo exhibition is an entirely separate art form, and it's refreshing to see Wendt's work in this layered format.

Women & Their Work gives significant curatorial control to artists, letting them select and arrange their own work and providing a budget for a curatorial adviser of the artist's choosing. The result of this, for better or for worse, is that the artist's voice comes through doubly strong. At times that manifests itself as welcome purity, but at others the work and its arrangement can feel untempered or over the top. For Wendt, it's a bit of both, but that's not altogether a bad thing.

As viewers enter the gallery, they must pass Saint Grab, four blue-black hands extending from the wall at suggestive heights, poking, grabbing, and groping in what the artist describes as "making each visitor automatically an object of desire." After passing this trial, viewers move to a series of large photographic portraits of stoic, partially nude figures modeling talismans, magical arms, and armor of the artist's design. The photos give way to sculpture: a grotesque runner rug in the image of enlarged human skin with a rubber-band ball bulging through from underneath (in which, we are told, are written secrets of the artist); a freestanding set of terraced shelves holding crudely crafted "trophies," most of them in the shape of male or female genitalia; and a full history museum display of the items worn by those in the photographs, most made of old sports equipment altered and adorned with feathers, horse hair, false teeth, and plastic bling. And then, tucked away in a corner is a peculiar curiosity, a curtained closet of sorts next to a chair occupied by a black "SECURITY" ball cap and a matching shirt. In the small enclosure is a vanity with a blurred-out image of the artist in place of the mirror, and several pages of the artist's plans and research for the exhibition. At the opening, two performers animated the space, the first in the security uniform, and the second behind the curtain, topless, and acting in surprise at any who might pull back the curtain on the faux private space.

This final space, along with the initial work's aggression toward the viewer, changes the atmosphere of the exhibition, somewhat counterintuitively making the show more theatrical, lighthearted, and ridiculous. The photos, taken in individually, have a strong air of mystery and personal power, each subject strengthened and made proud by the objects that adorn him or her. It's easy to imagine any one of them existing spotlit, full of hidden meaning, in a dark, grand house. Shown en masse so closely together and viewed through the lens of the performance space and Saint Grab, they conjure an entirely different meaning. Here, the same items show up in multiple portraits, stitching together a mock-tribe of characters passing props among themselves rather than symbols. The suspension of disbelief so easily found when faced with a single image or object becomes almost impossible. Instead, viewers find themselves watching a game of pretend, a group of individuals barely concealing their laughter at the strange staging they've agreed to.

These contradictory readings have their own distinct appeals and drawbacks, but thanks to the tight professionalism and production value of the work and its display, the paradox is less jarring than it would otherwise be. Whether taking the serious tone, reading the portraits and items as symbolic extensions of the self, or taking the jesterly holistic read that celebrates a self-deprecating arrangement of contrived narrative and half-willing participation, each interpretation can be valued on its own merits.