The first full-length poetry collection by this Hill County native brings him back to Llano, powerfully 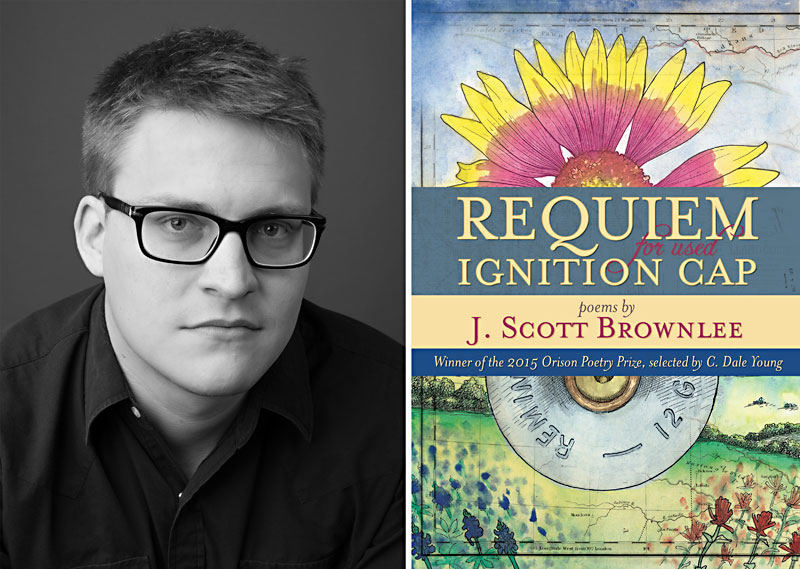 J. Scott Brownlee may live in Philadelphia, but he's never far from Llano. You can sense that – see it, touch it, smell it – in Requiem for Used Ignition Cap, his first full-length collection of poetry, published this past October by Orison Books. Every poem in the book is deeply rooted in Hill Country soil, with evocations of caliche, live oaks and cedars, Indian blankets and bull nettles, mockingbirds and rattlesnakes, whitetail deer and yellow perch, and the vast, unknowable blue of the Central Texas sky. Here, too, are the people who live among those natural wonders, and the trucks they drive and the guns they shoot and the Bibles they thump and the meth they get high on. And nothing of that place that is conjured – not the antlered buck or the wounded Iraq war vet, not the salt lick or the horseflies or the catfish heads on a clothesline – has an air of distance about it, of being drawn from memories of long ago. The descriptions vibrate with the immediacy of things freshly seen and felt, held just under the skin and still rushing hot through the blood.

Brownlee never would have expected his hometown to someday become his muse. Like so many kids growing up in small towns in Texas, Brownlee only ever thought about getting out, leaving Llano in his rearview mirror. And when he graduated from high school, he got out, first to Austin and the University of Texas, then Chapel Hill and the University of North Carolina, then Brooklyn and New York University, where he earned his M.F.A. in poetry. But somewhere in his travels, the land of his youth began to reclaim him. As he puts it in the poem "Hill Country Elegy," included in Requiem for Used Ignition Cap:

"For over eighteen years I thought I would never grieve

leaving here. Now, it's the deer calling me back

with their white tails, faint flicks in the darkness again

between my snake chaps and the bee brush, the mesquite

scrub and the needled cactus spines."

Around five years ago, Llano became the focus of Brownlee's work, and grounding it in that sense of place seemed to feed both his writing and recognition of his writing. His poems began appearing regularly in literary journals around the country, and his chapbooks started garnering awards: the 2013 Button Poetry Prize for Highway or Belief, the 2014 Robert Phillips Poetry Chapbook Prize for Ascension, and the 2015 Tree Light Books Prize for On the Occasion of the Last Old Camp Meeting in Llano County. Sense of place became so vital to Brownlee that he helped form a literary collective called the Localists, which "emphasizes place-based writing of personal witness, cultural memory, and the aesthetically marginalized working class."

This week, the place that looms so large in Brownlee's verse sees his return. The poet is back in Central Texas for the holidays and is taking advantage of his time here to boost attention for his new collection, which has already been a finalist for the National Poetry Series and the winner of the 2015 Orison Poetry Prize. He's slated to read at two events over the next couple of weeks:

• On Thu., Jan. 7, 7pm, Brownlee and Erin Belieu will be featured poets for Everything Is Bigger reading series' first edition of 2016 at Cheer Up Charlies, 900 Red River.

Think of these not so much as chances to hear an author recite his words publicly as opportunities to have a native guide you through territory that is familiar yet strange, that you may have passed through numerous times and yet not seen. For the Hill Country of Brownlee's poems is a land of stark beauty and startling violence, intertwined like climbing vines and every bit as natural, a place where "the river splits light like a straight razor's edge," where a yearling fawn hit by a truck and dead on the road is still "bright in the eye – like headlights of traffic," where even the beloved bluebonnets warn us not to plant them in the grass "because we kill every good thing we touch." It is a place where violence is sometimes a binding force, as when a man shooting a buck imagines his body linked to the animal's by "the bullet

fired through twilight between us. Its hot cone breaks

at its vanishing point where a great peace fills me

and an emptiness, him." In that violence is often release, sometimes from violence experienced elsewhere, as with the soldier home from Iraq who "slid the gun off safety, fired two rounds into his chest, & then said nothing to the river." There's a sense in it almost of Old Testament justice: eye for eye, violence for violence. And it makes sense, as Biblical teachings hold a powerful sway here – and yet not so much as to keep fervent Christians from surrendering themselves to meth. It's a place where redemption is longed for, but which may come not in the form of a deity's absolution but erasure, oblivion, silence. "Who's to say the soul," Brownlee asks in "Ritual,"

"isn't a destination we approach gradually in an empty pasture?"

Brownlee's Llano is a place complex and haunting in ways you may not expect. And once you've been there, there's a good chance that, like its author, you'll never be far from it.

A version of this article appeared in print on December 25, 2015 with the headline: No Place Like Home