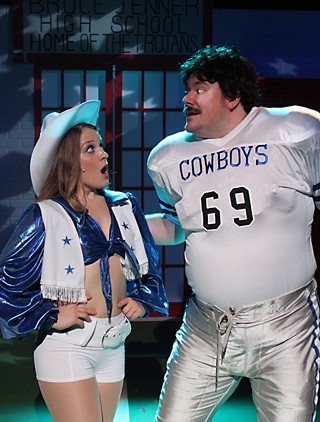 At some point during the kitschy, raunchy good time that is Doctuh Mistuh Productions' staging of Debbie Does Dallas: The Musical, one naturally wonders just how faithful its creators have been to the source material. Quite a bit, it turns out, barring actual nudity or, ahem, physical penetration – though a moment to which I'll refer as simply the "Banana Money Shot" may leave a few vanilla theatregoers blushing.

The musical, conceived by Susan L. Schwartz with music and lyrics by Scott Sherman (with Jonathan Callicutt and Tom Kitt), is based on the seminal (tee-hee!) 1978 blue movie of the same name, released by School Day Films, written for the screen by Maria Minestra. The plot is simple: Debbie has been accepted as a "Texas Cowboys" cheerleader, but must fund her own trip to Dallas. She and her (mostly) supportive friends form a company called "Teen Services" in order to raise bus fare. I'm sure you can guess the many ways they discover to do so. Director Michael McKelvey and his cast have a firm grip (tee-hee!) on exactly what this show is and make no apologies for it. The cheese and camp factor is through the roof from the start, with the lovely, virginal Debbie – played with naive perfection by Monique Wise – leading the cheerleaders of Bruce Jenner High School (go ahead and picture that acronym before you continue reading) in a routine. Next we meet the football team, led by Debbie's boyfriend Rick, played by Joey Banks with enough bro-vado to fill a stadium. From there we meet the many adults who will, uh, engage the girls' services. The entire cast is stellar in their acceptance of the ridiculousness of this entire affair, with Ryan Wilson and Gregory C. Driscoll playing the rest of the team and various business owners with glee and Matt Connelly as the "Big Man" in more ways than one. Lexie De Anda Trejo, Caroline Ragland, Kathryn Lane, and Madison Weinhoffer fill out their roles superbly as the cheerleading team that helps Debbie make her big move. The absolute joy the cast exudes is palpable; it's no secret everyone is in on the dirty joke, as tongues both onstage and off are planted firmly in cheeks. (I'm seriously running out of energy for these naughty puns.)

The cheesy Seventies feel to the environment is pulled off magnificently, with costumes by Glenda Barnes, music direction by McKelvey, sound by Joel Mercado-See, and a set by Cameron Allen that is football field, high school, library, car wash, and various other locales – and several scenes begin hilariously with the actors turning to the audience and announcing locations to their scene partners. ("Hey, Rick! It's nice to run into you! Here, on the street!" Wink-wink, nudge-nudge.)

My only worry about the production was that it might not be able to sustain the joke for a full 90 minutes. I was wrong, as the ante is constantly upped, and the laughs go from chuckle to nervous laughter to guffaw. Even the serious moments are self-referential and meta; when De Anda Trejo beautifully sings "God Must Love a Fool," it is with the understanding that this is the "serious" part of the show, which allows it to be part of the bigger joke. From perky top to oft-exposed bottom, Debbie Does Dallas: The Musical is an evening of cheeky, giddy fun.

Debbie Does Dallas: The Musical 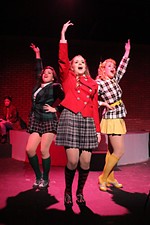 Heathers, the Musical
Doctuh Mistuh's staging of the Eighties cult film is ridiculous in the best possible way