"Alex Diamond: Wette" at Not Gallery

An unlikely combination of violence, action, and watercolor stand out in this solo show 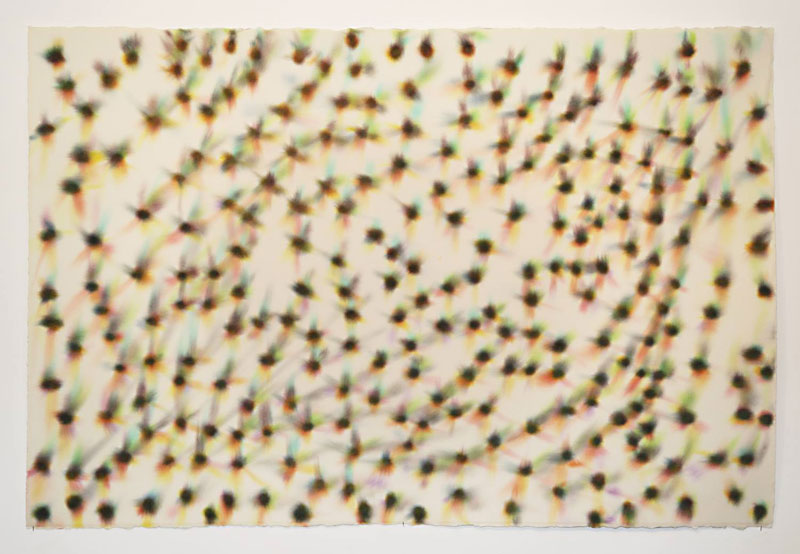 Think watercolor, and it calls to mind faded beach scenes, pastorals, far too many architectural studies of Venice, and other benign works of art – not so at Not Gallery. In a dramatic shift from his tightly geometric, crystalline abstractions of former years, Not curator and artist Alex Diamond is exhibiting a new body of wet-on-wet watercolors that resemble the gravityless forms of the microverse and macroverse, and in some instances human anatomical structure. These vibrant forms of varying scale might not be able to pull completely away from the baggage of bland pleasantries associated with the medium were it not for the idiosyncratic exhibition statement presented with the title list and on all forms of online messaging about the show. Avoiding any mention of the work on display – or of any art whatsoever, for that matter – the statement instead serves as a strange micro essay on the subject of control, first expounding the practical application of the leash as a tool to limit freedom and then sinking into increasingly violent measures of imposing one's will on another. It's bizarre – almost certainly a dodge of taking on the more difficult and vulnerable task of talking about one's own work, but it's also hugely helpful to the art on display in giving what could aptly be described as lovely abstract painting with an edgy, slightly nefarious tint.

Several of Diamond's blurry paintings feature repeated closely overlapping loops made with a gradient of color and value. On the larger scale, it's easy to imagine the artist moving over the painting, repeating himself consistently until fatigue alters the course. The painting serves as a map of this action, and given the exhibition statement, one can find an analogy to such forms in the worn path of a tethered dog: loosely circular, exploring the bounds of its freedom.

Other works are made in a similar fashion, through repeated layering of similar paint-movements in other forms: a pattern of dots, adipose-like folds, and others. The stroke is obliterated through the wetness of the substrate, leaving organic, highly blurred images with no hard edges. The result has an effect native to Op Art rather than the Action Painting that Diamond draws more directly from; that is, the paintings produce an unusual visual phenomenon, causing the viewer's vision to blur and distort as the eye grapples with the soft edge of the subject and the vibration of color. As the eye tries to push the image into clarity, the image refuses and instead forces the rest of the viewer's world out of focus – a battle of control most pleasantly resolved with surrender.

"Low Down: New Works on Paper by Ricardo Vicente Jose Ruiz"
How the strange visions in this Not Gallery exhibition relate to one another is difficult to say, but they're all both ancient and immediate 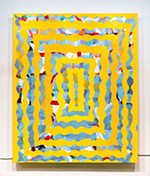 "Labyrinth" at Not Gallery
Ryan Thayer Davis' large and highly saturated abstract fields of color are warm, alive, active, and pleasing to be among