With her new holiday comedy, theatre artist Christine Hoang makes a safe place for everyone 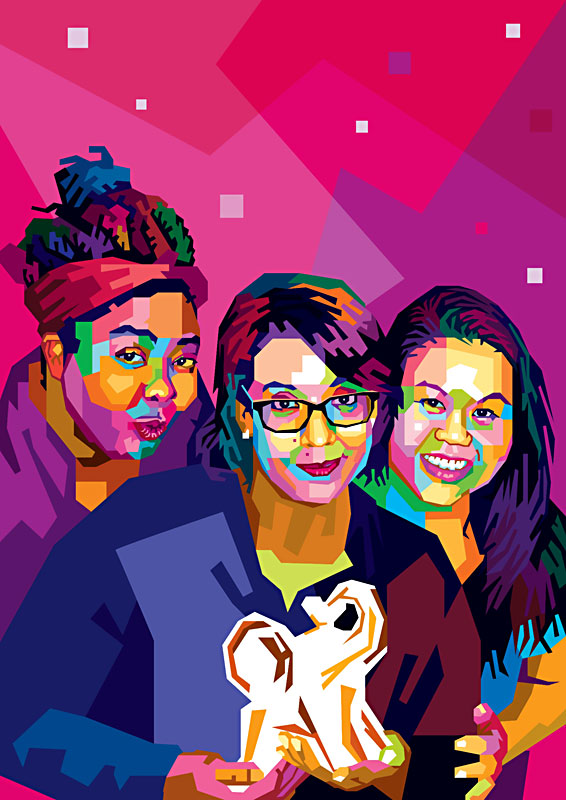 When Christine Hoang calls characters in her play People of Color Christmas: The White Elephant in the Room "misfit toys," she isn't just tossing off the phrase. This Vietnamese-American theatre artist watched her share of TV holiday specials as a kid, and the ones that most spoke to her were A Charlie Brown Christmas and Rudolph the Red-Nosed Reindeer. "Both feature underdogs," she says. "The scene in Charlie Brown that resonated most with me was when Charlie Brown does his best to pick a Christmas tree for the school play. He is really excited about the humble tree he picked. But when he brings it to his schoolmates, they all taunt him. 'Boy, are you stupid, Charlie Brown. You were supposed to get a good tree. Can you even tell a good tree from a poor tree? You're hopeless, Charlie Brown.' With Rudolph, he gets teased for looking different than everyone else. And he finds himself in the land of misfit toys."

Hoang knew all about looking different and not fitting in. Her parents had come to the U.S. as refugees, and building a life for themselves and their five children meant the two of them working three full-time jobs to clear $45,000 a year. Hoang recalls receiving a Christmas gift from them when she was in third grade: a pencil sharpener topped with an owl in a graduation cap. It wasn't much – she'd seen one in the "under $5" section at Spencer's Gifts – but it was a big deal because gift-giving at Christmas wasn't part of her parents' tradition. "In Vietnam, the big holiday was Lunar New Year, when kids would get gifts of lucky money in red envelopes," Hoang says. As kids, her parents celebrated Christmas by going to church with their devout Roman Catholic families. Still, Hoang had her heart set on a teddy bear, and she'd been especially good so Santa would bring her one: doing all her homework, helping her mom around the house, being extra kind to her little brother. "And every night, I said a little prayer, hoping God would let Santa know what I wanted for Christmas." When no bear came, Hoang went to her room, closed the door, buried her face in her pillow, and cried. "I realized that Santa Claus wasn't real."

The pain of that experience was doubled back at school when Hoang's teacher had each student write an essay on "What I Got for Christmas" and read it to the class. One bragged about getting a boombox, one complained about receiving sweaters. "Then it was my turn," Hoang says. "I did my best to describe how cute the owl figurine was, to make it sound adorable and [like] something that would pass as a good Christmas present. But when I got to the last paragraph, I couldn't read it. Tears started to well in my eyes. My throat was choked and sore from the emotions I was suppressing. I didn't want to tell my classmates that all I got that Christmas was a pencil sharpener. So I just cried. I didn't want them to think my parents didn't love me because they did. I didn't want them to think my parents were poor. I didn't want them to make fun of me or think I was inadequate. But I felt that inadequate, as if I had a red nose or had selected the worst tree for the Christmas play."

Hoang has tapped that feeling for her holiday comedy, which presents characters who, she says, "were all teased as kids, and as adults still experience things that make us feel that we don't fit into the mainstream. But we misfit toys found each other." In the play, they gather at an annual White Elephant party thrown by Regina, who creates "a safe place in her home where we can hang out and steal Christmas gifts from each other and eat cookies and celebrate our version of Christmas together." As three of them belong to a singing group and are, in Hoang's words, "hams," they'll sing "at the drop of a hat," with many of their shared private jokes taking the form of songs: raps or a cappella tunes. (Art follows life here, as some of what the friends sing was developed by the actors who play them; Hoang and Michelle Alexander helped arrange a few a cappella numbers, and Kevin Andrew Grant co-created two hip-hop songs with music director Bryan King.)

As the play's title suggests, the actors are Asian-American, Latino, and black – reflecting Hoang's desire to "shine light on diverse stories through theatre, film, and music" and connect different kinds of people through storytelling. Her company's name, Color Arc Productions, was inspired by the rainbow, for its existing association with diversity and the idea of an illuminated bridge. But Hoang's reimagined rainbow has hues drawn from "diverse skin tones in the community." Its logo turns the rainbow on its side to form the C in Color Arc, but also a crescent – a nod to Hoang's hometown of New Orleans.

Launching her own production company is something "I never, ever, ever thought I would do," Hoang says. After minoring in theatre at Louisiana State University (her major was English lit), she left the stage behind. "I took the safe route," she says. "Like many first-generation Americans/children of refugees, I chose a career path that was safe and stable and less taxing than the low-paying jobs available to my Vietnamese refugee parents. I went to law school and became an attorney." Now, Hoang is entering what she calls the "born-again artist" chapter of her life. Grants from the city's Cultural Arts Division and the Creative Fund to support People of Color Christmas have boosted her confidence and helped her feel "that maybe my ideas had merit. Maybe I could continue to create. Maybe I could be the artist I was starting to become in college, the artist I suppressed for years."

All Over Creation: Regifting
There may be new life in old Scrooge yet, thanks to creative Austin artists