Peter and the Wolf Go to Texas 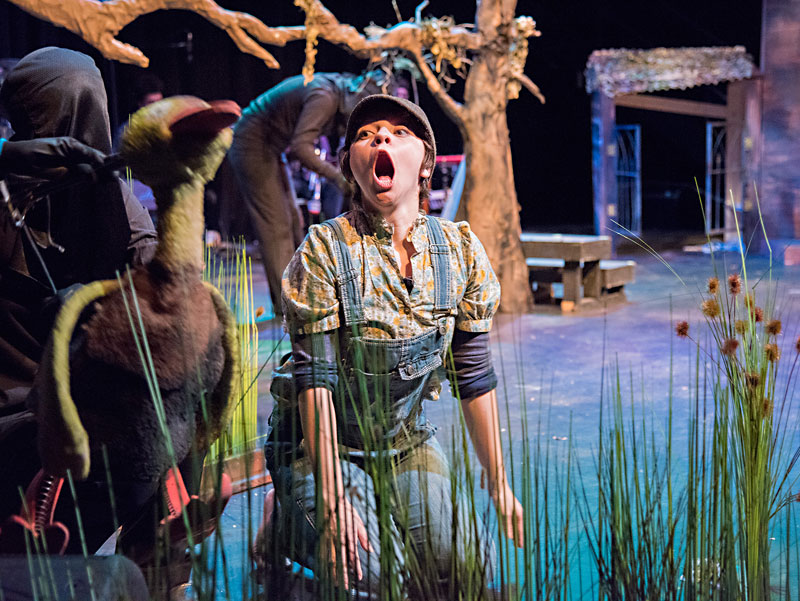 To get from the Peter and the Wolf that you know (Russian folk tale, boy hero, Prokofiev, symphonic) to the one premiering this week at Stateside at the Paramount (Texan tall tale, girl hero, Mother Falcon, indie rock), you travel a long and winding road through grrrl power, punk rock, a Siberian labor camp, native Texas wildlife, and long-distance collaboration. But let's start with the Muppets.

"When I was young, my introduction to Debbie Harry and Johnny Cash was seeing them perform on The Muppet Show." So says Girls Rock Camp founder Emily Marks, who recognizes that while the kid in her tuned in to see Kermit, Miss Piggy, and Fozzie, she also wound up with an earful of cool sounds from all those humans she didn't know. The show that made kids laugh till milk shot out their noses was also a gateway drug to great music. So when Marks was forming her company Lionheart Youth Theatre, she thought, "Why not expose young people to amazing musicians through this kind of work? I love 'encouraging' people who would never think of making work for kids to make work for kids. I don't look for children's artists. I look for great artists to make great work."

Marks had in mind two such mighty creative forces for Lionheart's launch: Glass Half Full Theatre and Mother Falcon. In the former, you had a stage company whose acclaimed shows (Fup Duck, The Orchid Flotilla, Once There Were Six Seasons) took puppetry in adventurous, original directions. In the latter, you had an award-winning musical ensemble that would have no doubt thrilled young Emily had she seen them on The Muppet Show. And teaming the two? Icing on the cake. Says Marks, "I love putting artists together that would never think of working with each other or get the opportunity to do so."

In choosing a subject for the collaboration, Glass Half Full Artistic Director Caroline Reck suggested Peter and the Wolf, citing its familiarity to the public and simple story. "If you ask a random person if they know Peter and the Wolf, they usually say yes," Reck notes. "But if you ask them what actually happens in it, most can't tell you. That was a good sign that it had room for reinterpretation."

And Reck is not timid about reinterpreting a story. "Caroline goes full throttle into an adaptation with confidence and a punk rock heart," says Marks. "Just because something's been done a certain way for 50 years does not mean it can't be done in a different way." Case in point: the titular hero's gender. "We were chatting about girl-driven stories one afternoon," recalls Marks. "I commented to Caroline that with both our backgrounds it was weird that there wasn't a girl in the show, and she just casually suggested that the main character can be a girl! It was no big deal to her. Fearlessness like this makes a great artist and makes the magic happen."

Don't imagine, though, that the change in the character will be limited to swapping out Peter for Petra. "It is important to me that audiences see female characters that are brave," says Reck, "not by replacing male stereotypes with female versions performing traditionally male actions, but by representing what it is about female bravery that makes it unique. In our story, the true moment of courage is Petra's realization that the wolf, while scary and dangerous to her, wants and deserves the freedom to roam the woods, the same as Petra. Her empathy for the wolf and her family is what leads Petra to make the bravest decisions of the show: freeing a wild animal, accepting the potential danger of that decision, and most importantly, standing up to her grandfather's prejudice and convincing him of the wolf's right to live free. There is a version of bravery which favors people who conquer and belittle their enemies. You can see the results of this kind of 'bravery' in the headlines worldwide now. I'd rather champion the bravery that comes from making hard decisions that allow for a little more potential danger but a lot more compassion."

For Marks, that's a bravery displayed by Natalya Sats, who produced the original Peter and the Wolf in 1936. As director of the Moscow State Children's Theater, she commissioned the orchestral work from her friend Sergei Prokofiev. A year after its premiere, she and her husband were caught up in a Stalinist purge and accused of treason. He was executed, and she was banished to Siberia, spending five years in a labor camp. Such an experience might have broken many people, but Sats soon returned to children's theatre and became an international force in the field until her death in 1993. "She was a real changemaker," says Marks. "She was adamant about not having things dumbed down for young people. It just re-affirmed my thoughts that we need people to take children's programming to a new level."

With the creative team she recruited for Lionheart's debut, Marks is doing her part to make that happen. The thought and detail going into the show is on par with a project aimed at adults. For instance, once the decision was made to set the story in Texas, Mother Falcon's Nick Gregg, who headed up the project's composition side, suggested that three animal characters be represented by specific species native to the state – red wolf, chachalaca, and black-bellied whistling duck – because he was interested in their sounds and wanted to use them for those characters' musical lines. That idea in turn led Reck to research the behavior for those species and work to translate them into movement for puppets that demonstrates their characters.

Because Mother Falcon was touring during much of the show's development, Reck would work up scenes with her company's puppeteers, then send videos of them to Gregg, who would score them. Despite the back-and-forth process, the give-and-take was Reck's favorite part of Peter. "Mother Falcon are really open to trying out an idea, and also at drawing the line in the sand when they really believe in something and don't want to budge," she says. "That's my favorite way to collaborate: with partners who care very deeply and have great ideas, but are open-minded enough to try other approaches."

A version of this article appeared in print on December 11, 2015 with the headline: Peter and the Falcon?