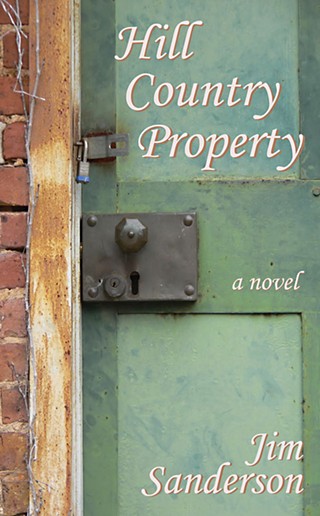 The familiar quip originated in 1985: Austin's official bird is the construction crane. The city in that messy, birth-of-a-boom year is the anchor of Jim Sanderson's novel Hill Country Property, which trails Roger Jackson, a private detective paid to provide proof of infidelities but who instead must unearth the truth of his own failed marriage. The journey takes him across Texas, over the borders into New Mexico and Oklahoma, and further into the past as he mines the lives of his cowboy father-in-law and the mother-in-law who abandoned both the cowboy and her children in search of her own story. "My thought for the day: Transcendence, idealism, doing the right thing, and solutions all belong back in the Sixties," Roger opines. "But now we are in the existential, give-a-shit, less innocent, wiser, conservative, Christian, intoxicated Eighties. Get used to it."

Hill Country Property is a prequel to Sanderson's East Texas-set novel Nothing to Lose. In both, Roger narrates with the voice of the traditional gumshoe, but Sanderson's books are about a bigger mystery: What makes people keep going from day to day despite disappointments and failed attachments? Roger's father-in-law Henry evokes Homer Bannon of Larry McMurtry's Horseman, Pass By (and its film version Hud) as a stoic cowboy with a darkish past who sees faded hope in the land that gives the novel its title: "This Hill Country is the prettiest, best part of Texas, and I got some, you see. I got a view and river, had a woman ... just didn't figure," Henry tells Roger. Passion, compromise, and human frailty figure large in this world, and Sanderson's prose is adept, touching, funny, and up to the challenge of tackling such big questions. Through three story collections and six other novels published mostly through university presses, he has quietly found his literary voice.