There are girls who are traveling home to visit their families this holiday, who find themselves staying in their old rooms, looking at their childhood books, and can't help but thumb through some of their favorites. The horse girls will gaze at worn and well-loved copies of Black Beauty and Misty of Chincoteague. The amateur sleuths will revisit Nancy Drew and Harriet the Spy. But the ones who begged to go to the Renaissance faire, who rewrote portions of Eragon and Lord of the Rings so the girls had better parts – the adventure-sword-and-dragon girls – they'll be wistfully revisiting Tamora Pierce's books and remembering how good it felt to be their own knights in shining armor.

Gwendolyn's Sword is Austin author E.A. Haltom's gift to Protector of the Small fans all grown up. A spectacularly well-researched and swiftly paced historical novel (with just the most tantalizing hint of magic) follows the titular Gwendolyn, a 22-year-old woman managing her husband's estate as he fights in the Crusades alongside Richard the Lionhearted. Land grabbing and rebellions foment in the king's absence, thanks to his resentful younger brother, John (known best from his role as villain in the tales of Robin Hood), and when Gwendolyn discovers that she is a distant descendant of the legendary King Arthur and supposedly the heir apparent to his sword Caliburn (better known today as Excalibur), she rises to the occasion and takes up the mantle of hero and political player.

Gwendolyn's Sword can't help but be fun by virtue of its genre alone, but its rich details and understated feminism are what distinguish it. Of course, a great part of writing about historical times is presenting the ugly realities of its ideology, and in 1193, as today, there was plenty of misogyny to go around. But Haltom doesn't allow Gwendolyn (and for that matter, Eleanor of Aquitaine, who appears throughout) to be crushed by it, and in the meantime allows space for fruitful female relationships, frank realism about womanhood (never have I been so surprised and delighted to have menstruation discussed in a book), and the creation of a heroine who deserves as many ballads as Arthur, Richard, or Robin Hood. One can hope for a sequel. 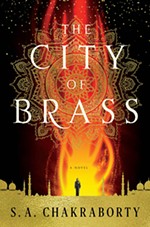 The City of Brass by S.A. Chakraborty
This debut fantasy novel is appealing, in part because it draws on legends of the Arab world for its magic