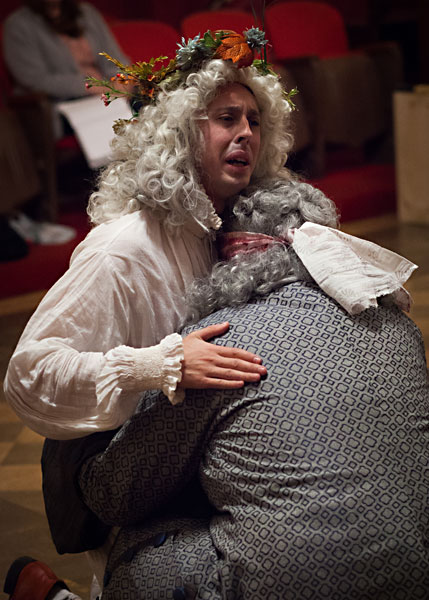 Beyond the brink of madness: The crazed Lear (Ryan Crowder) embraced by the blinded Gloster (Robert Matney) (photo by Kimberley Mead)

Slap a happy ending on King Lear? Deface this titanic tragedy of Western lit by keeping alive Lear and his youngest daughter, then wedding her to Gloucester's noble son?

Yes, that's just what Nahum Tate did 75 years after Shakespeare penned the play, and despite the fact that his revision was well-received at the time – and for 150 years afterward – for the last two centuries this Restoration-era poet laureate, like Lear's loyal manservant in the play, has been pilloried for his insolence. And what's interesting about that is, so many Shakespearean purists who have railed about Tate's hatchet job on Lear have done so based solely on secondhand information. Though the text is readily available, few people have taken the time to read it, and it's almost never staged today. And therein lies the initial fascination of the Hidden Room Theatre's latest deep-dive into theatrical arcana: Artistic Director Beth Burns and her company are allowing those of us raised to consider Tate's Lear an abomination the opportunity to see it and judge its quality for ourselves.

The results may surprise you, as they did this avowed devotee of Shakespeare's tragedy. For while much has been made of Tate refashioning Lear to fit Restoration England's genteel sensibilities, he retains much of the treachery and brutality that fueled the Elizabethan version. The bastard Edmund still frames his brother Edgar in a plot to kill their father, then betrays the old man himself. Lear's daughters Goneril and Regan still scheme against their father and each other, vying for sole control of Britain and the heart (and bed) of the bastard. Most shockingly, Cornwall still gouges out the eyes of Edgar and Edmund's father in full view of the audience. And the swift collapse of Lear's kingdom into violent chaos still drives the aged monarch into a raging storm and beyond the brink of madness. To discover that this isn't such a kinder, gentler play after all adds to its fascination.

That said, there is a rarified air to Tate's Lear, especially in the Hidden Room's staging. Burns and her sterling production team have striven for fidelity to Restoration presentation, in not only the elaborately curled wigs and opulent gowns and tailcoats worn by the actors (luxuriously realized by Jenny McNee and Jennifer Rose Davis), but also the way they move, with codified gestures articulating their characters' feelings just as their words do – an index finger pointed at the temple, hands covering the eyes, a hand laid over the heart. This is as heightened and precise as a court dance, placing us in a society leagues from the primal, stark ones often seen in 20th century Lears; this is a civilized realm where ornamentation is prized – for its meaning as much as its decorative appeal. It fosters something of that mythic remove of the fairy tale, but these "once upon a time" characters feel no less human for it. That's because the actors here do an admirable job of balancing gestural artifice and emotional truth. When Cordelia refuses to profess love for her father in exchange for her inheritance – Julia Lorenz-Olson imbuing the character with more backbone and resourcefulness than is frequently seen – Lear's fury is real, thanks to the fluidity with which Ryan Crowder integrates his poses of outrage with the honest anger in his voice and face. And when Lear later reunites with her, their reconciliation is a tender intertwining of hearts and hands.

Indeed, in the feeling expressed in that scene and the ones that follow, with Lear fighting off the servants who would kill Cordelia and giving her his crown, Tate's Lear seems less to prefigure Beckett's bleak dramas, as Shakespeare's does, than the romances the Bard himself wrote in the years after Lear: Pericles, Cymbeline, The Winter's Tale, The Tempest – all possessing fairy-tale horrors, coincidences, and reunions sweetened with forgiveness and regeneration. The Hidden Room's dedication to giving Tate's Lear a fair hearing, and the skill of the actors, designers, musicians, and Burns in creating one, have revealed a revision closer in spirit to Shakespeare than its notorious reputation suggests. If Will had waited just a few more seasons to pen Lear, he might have written Tate's version himself.

In Memoriam: Peg Miller
Last call for the big-hearted co-owner of Chicago House