For this Co-Lab Projects exhibit, a gallery at Canopy becomes a tomblike space for exploring religion 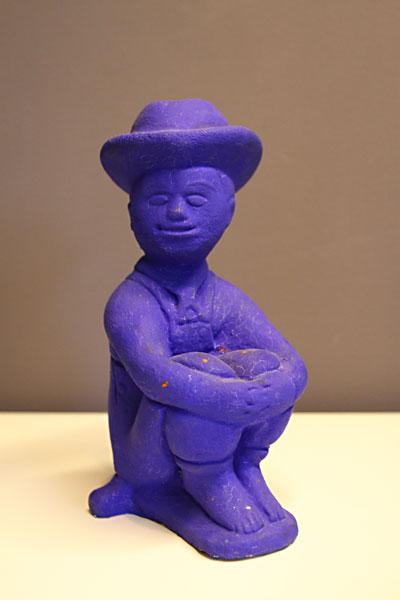 The Indigo Kin (1998), by Angelbert Metoyer (photo by Mark Newsome)

Co-Lab is back – sort of. The Eastside gallery has been struggling to open its new location for months, with a grand reveal now promised for 2016. Until then, Executive Director Sean Gaulager and crew have taken up residence in Canopy, adjacent to Big Medium's now-flagship gallery. "Life Machine," their third exhibition in the temporary space (preceded by "Art of the Brew" and "Summer School"), focuses on artist Angelbert Metoyer, a self-proclaimed nomad who hails from Houston, having shown at both the Project Row Houses and CAM Houston earlier in his career. Metoyer's extemporaneous style has earned him notice outside Texas – with multimedia exhibitions at Miami's Art Basel and the Dactyl Foundation, as well as collaborations with contemporary poet Saul Williams and hip-hop artist Mike Ladd – but now Metoyer is back in his home state, with work in two local shows running concurrently: the Contemporary Austin's "Strange Pilgrims," on view through Jan. 24, and "Life Machine," developed by Co-Lab in partnership with the Contemporary.

"Life Machine" explores the idols, language, and music of religion, and, as such, the gallery space has been transformed into a temporal tomb. With blacked-out windows, the gallery pulses to the beat of Metoyer's noise collages. B.L.A.C.K.I.E. (snake island), last night of sleep, a sculpture consisting of an American flag and various speakers taken from the Houston rapper Blackie, spits out a droning score created by the artist. A bloody doll nestles inside a cattle's skull in another work. Metoyer's marble slab tables reveal Grecian-inspired illustrations. A wooden frame opens to reveal mud cloth illustrations overlaying a portrait while a blue idol's head, encased in glass, sits at its base. The intricate multimedia work continues in a second room, where the aesthetics are somewhat lighter, but the tone remains subdued.

The entire effect of "Life Machine" is dizzying, and that's arguably the appropriate condition in which to unpack theology. Metoyer confronts the varying duplicities of religion with a softened reverence, using the worn iconography to tell a new story. "Life Machine" offers "remnants of personality and spirit" from Metoyer's ancestry. For the artist, religion offers as many questions as it does answers in regard to identity and purpose, especially within the larger discussion of race and Blackness in America.

Co-Lab Projects, 916 Springdale, Bldg. 2 #103
www.co-labprojects.org
Through Nov. 28
A version of this article appeared in print on November 27, 2015 with the headline: "Angelbert Metoyer: Life Machine"