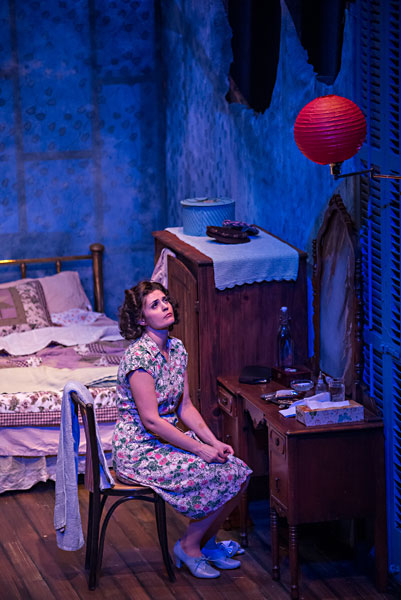 Austin stages are flush this fall with productions of Pulitzer Prize winners. Austin Shakespeare gave us a luminous Sundays in the Park With George ('85), the University of Texas shone with The Diary of Anne Frank ('56), St. Edward's University wowed audiences with To Kill a Mockingbird (novel, '61), and now comes Austin Shakespeare with Tennessee Williams' A Streetcar Named Desire ('48). Unlike the well-executed museum production just seen at St. Ed's, this show has audiences checking their preconceived notions at the Rollins Theatre door. Expectations are of no use here, and a little digging exposes a thoughtful take on Williams' classic.

For over half a century, directors have been challenged by Streetcar's first question: Whose story is this? Blanche's? Stanley's? Stella's? There's not necessarily a "right" answer; the choice simply lays the foundation on which the production is built. Austin Shakespeare Artistic Director Ann Ciccolella takes a calculated risk in choosing "none of the above," embracing metaphor and subtly pitting the New North against the Old South – a seldom used yet compelling idea that's certainly worthy of exploration given the current sociopolitical climate of galvanized divisiveness. Viewed through this lens, the gamble pays off handsomely. The onstage world of New Orleans into which Blanche DuBois steps is a melting pot of colorful denizens, each sporting an over-the-counter dialect (nimbly crafted by Robert Ramirez) ranging from Chicagoan to New Yorker, all decidedly Northern, in stark contrast to Blanche's plantation Southern voice and demeanor. From her first entrance onto Leslie Ann Turner's genre-defying set, which seamlessly blends a realistic interior with a jagged, unfinished, partially suggested perimeter, Gwendolyn Kelso's Blanche is a perfect relic of the South. Kelso keenly presents Blanche's descent into madness, painstakingly layering her performance with confusion, denial, and the charm that has worked well so far, but like the South itself, is losing its luster. As Stanley Kowalski, Andrew Hutcheson conveys the brutish, industrialist North in all its horrifying blue-collar glory. I don't envy an actor stepping into such iconic, Brando-sized shoes (which is not to say that Vivien Leigh's shoes aren't as difficult a fit), but Hutcheson easily puts his own mark on Stanley with a shrewd intensity, more cunning than beastly. That intensity seems to wane after Blanche's rape, possibly a deliberate choice to convey embarrassment and shame; an acknowledgment of what the North has done, though not an apology. Blanche's beau, Mitch – played fantastically by Michael Miller – rings as delightfully innocent. He is a pawn in Blanche's game, the last fly caught in her final web, and Miller's performance is natural, quirky, and awkward in all the right places. Amber Quick absolutely shines as Stella Kowalski, bringing a strong and sassy sense of absolute agency not always associated with the role. Here, Stella perhaps represents reason itself: a sense of a tired America just ready to move back toward stasis, torn between polar opposites incapable of admitting its own faults. Quick's Stella is aware of everything around her and does not require our pity.

A strong supporting cast rounds out the production, including Hannah Rose Barfoot as Eunice and Jason Graf as Steve, the Kowalskis' upstairs neighbors. Talena Martinez's costuming is appropriate and timely, and the fight choreography by fellow AMDA-Panda Kevin Squires is believable in its barely restrained viciousness. Patrick W. Anthony's lighting design works well around some jutting obstacles. Sam Kokajko's sound design is a mixed bag, often complementing scenes well, but unnecessarily attempting to steer the audience emotionally at a few key points.

Ciccolella's command of Williams' wit and lyricism lends itself well to this telling. Williams may or may not have intended this sort of interpretation, but it certainly exists within the text for those who care to find it. And those who do will likely find compelling parallels to our current world, where many cannot even agree to disagree. Interestingly enough, this production doesn't seem to paint anyone as the "hero" or "winner," but simply presents an angle that should satisfy intellectually and dramatically.

Rollins Studio Theatre at the Long Center,
701 W. Riverside
www.austinshakespeare.org
Through Dec. 6
Running time: 2 hr., 40 min.
A version of this article appeared in print on November 27, 2015 with the headline: A Streetcar Named Desire