In this simple, elegant staging of the Harold Pinter classic, it's what isn't said that matters 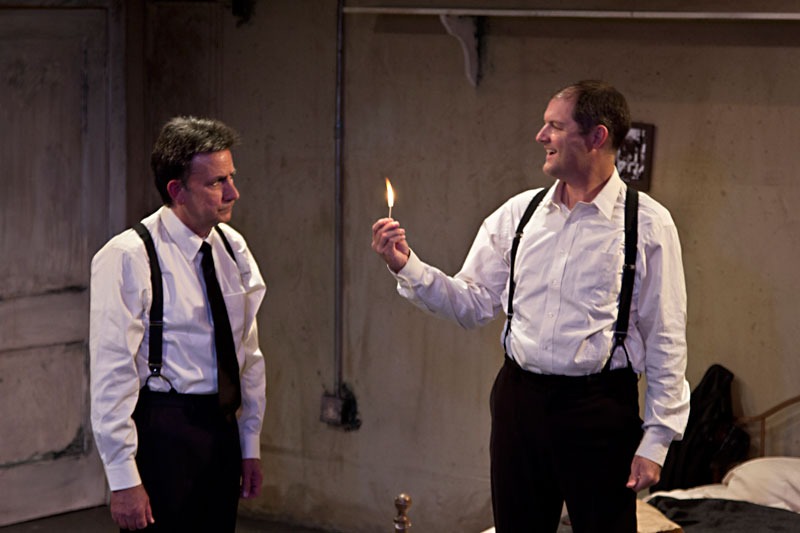 Walking a line somewhere between absurdism and realism, containing conventions of each, Harold Pinter's The Dumb Waiter is difficult to classify. Thankfully, dramaturg Rebecca Worley does us a great service. Her program notes for Capital T Theatre's run aptly refer to the play as a "comedy of menace," a spot-on description of a spot-on production.

Silence in theatre is a difficult tool, but highly effective when mastered. Entering Hyde Park Theatre, the usual din of audience chitchat is present; on the stage, however, a meticulously crafted silence has already begun. Two men – one asleep, one reading a newspaper – occupy a simple room, each on a single bed, a door and a dumbwaiter hatch between them. The disciplined stillness from the actors is palpable, and an anticipatory nervousness begins to build in the house. Indeed, the audience instinctively falls silent on their own, with no curtain speech, no pre-show announcement of any kind, just moments before the house lights dim. Once they do, we are in Pinter's clutches. The grimy set, designed by the show's director, Capital T Artistic Director Mark Pickell, and lit starkly by designer Patrick Anthony, remains home to silence and stillness for a few moments until a simple turn of a page elicits the first chuckle of the night, if only by finally breaking the stage picture. Several more moments pass before one of the men, Gus (Jason Phelps), stirs, beginning a routine of repetition as he struggles with his shoes – an active homage to Beckett's Waiting for Godot. After Gus returns from the restroom, Ben (Ken Webster) is the first to break the silence with a violent, guttural noise, echoing his feelings on the news story he's just read.

From here, Pinter's plot is simple: Two hit men wait in a room for instructions from Wilson, their unseen boss. The dumbwaiter mysteriously starts up, and our characters respond to it. The climax is ambiguous, and the less mentioned of it the better. It is less what is said that tells the story and more what is not said – and even more so how things aren't said – that matters here. Pinter's trademark dialogue – disjointed, rat-a-tat – leads Gus and Ben through a verse-chorus-verse of violent silence, intimidation, and impeccable comic timing through which their relationship is existentially realized. Tea crockery and Eccles cake are more important than one might imagine.

Among Pickell's many strengths as a director are his ability to fully grasp the needs of a show and to cast it perfectly. Pinter is among those many playwrights (from Beckett to Mamet to Baker) whose work is notoriously easy to wreck if the silence and timing are not properly respected. Pickell places the story in Hyde Park Theatre, an incredibly intimate space into which an audience cannot help but feel drawn. Webster plays Ben with a mixture of menace and quiet power, quick to change gears from one to the other. Gus is curious, chatty, and a bit naive at times, though no stranger to the violence for which he's tapped, and Phelps nails every moment. Both actors and director are masters of the "Pinter pause," and their attention to character detail is evident. Rebecca Pearcy's dialect work shines – Webster's cockney and Phelps' lower Received Pronunciation remain consistent, never blending or swapping.

Capital T's The Dumb Waiter is a simple, elegant piece of work. Even Cheryl Painter's understated costuming contributes by not distracting, with each man in a simple black suit, white shirt. Pinter won't have us thinking about how we can change the world, but this production of his classic may have us thinking about the futility of existence – and how hilarious that nihilism can be.

A version of this article appeared in print on November 13, 2015 with the headline: The Dumb Waiter