This production of Verdi's Egyptian tragedy delivers on the pomp and pageantry, but what makes the deepest impressions are the personal moments 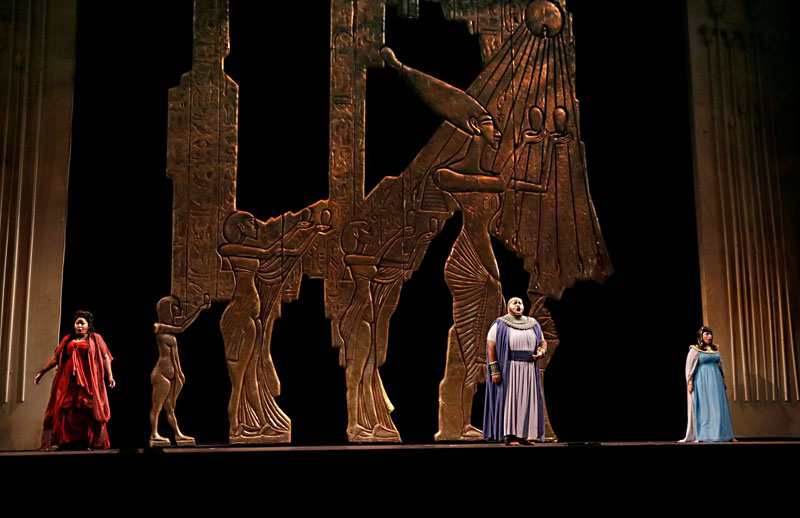 What is it that Rick tells Ilsa when he's convincing her to get on that plane with Victor Laszlo? "It doesn't take much to see that the problems of three little people don't amount to a hill of beans in this crazy world." Of course, he's referring to their romantic triangle in Casablanca as World War II rages, but his words apply just as well to a trio of lovers on the other side of North Africa in a war a few thousand years earlier – at least as imagined by Giuseppe Verdi and presented by Austin Opera in its latest staging of Aida. Oh, the positions held by Verdi's protagonists may be much grander in the scheme of things, but even though the warrior Radamès is leading Egypt's army in battle against attackers from Ethiopia, and both women contending for his heart – Amneris of Egypt and Aida of Ethiopia – are princesses, they're still the "little people" Rick describes, to our eyes. In part, that's simply because of the scale of the settings in this production. Designer Roberto Oswald employs little in the way of scenery, choosing rather to establish each locale with one sculptural or architectural piece monumental in size. In the second act, a stone head as huge as that of the colossus of Ramesses II hangs over the stage, dwarfing every human passing below it. The result here is that even those of royal blood and heroic might appear small and vulnerable, an effect that stage director Brian Deedrick accentuates at key moments with his placement of the performers. He has Karen Slack's Aida left alone on the broad Dell Hall stage, standing alone in a tight pool of light while looming behind her is that mammoth head sunk in deep shadow – Michael Baumgarten's lighting is spectacular in every sense of the word – and it heightens our sense of this enslaved princess far from her home as so isolated and alone. And when Slack sings, her voice wringing the ache and sorrow out of Verdi's emotive music, her Aida becomes a tiny vessel of flesh and blood, lost in a wide, wide world.

Verdi's music and how it is performed does the rest of the work in scaling these lofty figures of ancient times down to human size. Though Aida has developed a reputation for excess and ostentation, thanks to that memorable triumphal march welcoming Radamès home from the wars which has inspired producers to cram the stage with everything from chorus lines of dancing maidens to horse-drawn chariots to live elephants, it is at its heart, as Deedrick states in his program notes, "an intimate and deeply personal relationship opera." What keeps us engaged – and keeps it being staged – isn't the escalating spectacle but the rivalry between Aida and Amneris, and the divided loyalties between one's soulmate and one's country that trouble both Aida and Radamès. And those personal stakes come through with clarity here. Not that the pageantry isn't handled well – the cast impressively spans the stage for the triumphal celebration, and Maestro Richard Buckley and his orchestra deliver all the requisite pomp and grandeur in that score (with special kudos to those trumpeters) – but what makes the deepest impression again and again here are the personal moments: Slack's despairing Aida; Tuija Knihtilä's haughty Amneris, determined to claim Radamès, every note she sings invested with privilege; Issachah Savage's conflicted Radamès, guilt-ridden over choosing between love and patriotism, his soaring tenor dipping like a wounded bird; Donnie Ray Albert as Aida's father, projecting royalty even in a crouch, then standing, every inch a king, his baritone the soul of authority.

That intimacy and scale follow through to the final moments: It's simply Aida and Radamès in each other's arms below and Amneris praying for them above. It's just the problems of three little people, but in Austin Opera's hands that amounts to more than a hill of beans, much more. It amounts to great heart and artistry on the scale of the pyramids.

Dell Hall at the Long Center, 701 W. Riverside
www.austinopera.org
Through Nov. 15
Running time: 3 hr., 25 min.
A version of this article appeared in print on November 13, 2015 with the headline: Aida