Welcome to Night Vale The Novel

You know about Night Vale, right? It's that lonely Southwestern desert town inhabited by ghosts, angels, hooded figures, and sinister government agents. It's where fictional character Cecil Palmer reads the news on the Community Radio station and a glowing cloud hovers in the sky and watches over all.

The surreal locale is featured in a twice-monthly, serialized podcast narrated by real-life actor Cecil Baldwin and downloaded by millions. A live show of Welcome to Night Vale has toured 11 foreign countries and 35 states.

Now Welcome to Night Vale is also a book, a full-fledged novel that tells a complete story in about 400 pages. To promote the hardcover edition (Harper Perennial, 416 pp., $19.99) co-authors Jeffrey Cranor and Joseph Fink will appear in conversation with Steph Opitz on Nov. 6 at BookPeople. The following evening, the Paramount Theatre will host the Welcome to Night Vale live show.

According to Cranor, who created the podcast, and Fink, co-writer for the podcast, novel, and show, Night Vale's origins were modest before it went viral.

To date, the show has been downloaded more than 100 million times worldwide.

Once the podcast took off, Cranor and Fink began to entertain offers for books, graphic novels, and other mass-media projects.

"We both have always wanted to write novels," Cranor says. "So the idea of working with a publisher to make a novel out of Night Vale seemed the most exciting thing to us, a logical step for us as people who felt very comfortable about that medium."

The sudden spike in the podcast's popularity has been partly attributed to fans' overwhelming enthusiasm for the developing relationship between radio host Cecil Palmer and his boyfriend Carlos, a handsome scientist. ("There was a lot of excitement about a show that had a gay couple at its center, which was treated in a very non-'let me explain gay people to you' way," says Fink.) Having covered it extensively in the podcast, Cranor and Fink knew they didn't want to tell Cecil's story in the novel.

Fink says, "We definitely wanted to use this opportunity to go into a different voice, as a way to look at the ground you can't cover when you're writing only from Cecil's limited point of view."

Welcome to Night Vale the novel focuses on two supporting characters from the podcast. Jackie Fierro, who has always just turned 19 no matter how much time has passed, runs the local pawnshop. After an encounter with the Man in the Tan Jacket, she receives a piece of paper with the words "KING CITY" written on it. No matter what drastic measure she takes, Jackie cannot rid herself of it.

Meanwhile, Diane Crayton, treasurer of the Night Vale PTA and single mother to Josh, a teenage shape-shifter, keeps seeing her son's father, Troy, around town. Which is odd, because he left years ago but now looks no different. As she investigates Troy's appearance, she learns that her personal mystery is related somehow – wouldn't you know it? – to King City.

Longtime listeners and newcomers alike are likely to appreciate the ways in which Night Vale, as Fink puts it, "treats the absurd as normal and treats the normal as absurd." What they might not foresee is the emotional wallop the novel delivers in its climactic chapters.

Cranor says, "Looking back, a lot of it was pulled from having been raised as an only child by a single mother – the fun times and the extreme difficulty of that [situation], too."

Fink says, "I think Night Vale has always dealt with direct emotional honesty. From the very start, the weirdness mixed in with real feeling."

The novel, like the podcast, hinges on a sometimes uncomfortable balance between humor and horror.

"There's a certain sense that I don't mind if it turns into completely straight horror or if there's just a very funny section that isn't scary at all," Fink says. "I think we always just go by the rubric of, does this seem interesting to us? If it does, then it's good for the show, whether it's a straightforward scary story or a goofy comedy bit."

Cranor and Fink say that in 2016 they will inaugurate a new podcast, one not set in Night Vale.

In February, the Night Vale cast and crew will embark on a tour of Australia and New Zealand. Tours are an occasion to meet ardent fans in new locales. Occasionally, though, the cultural references don't translate easily.

Cranor says, "The joke was: 'As the great Herman Melville once said, "Call me."' Every other place, that line got a laugh, but in Germany, it was just crickets."

Fink adds, "One time somebody yelled, 'We don't know who that is!'"

The Welcome to Night Vale crew isn't likely to encounter that problem in Austin.

All the hail the Glow Cloud! 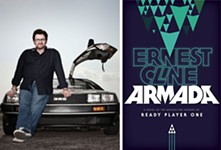 Ernie Cline Gets His Game on With Armada
For his second novel, the author of Ready Player One mines his love of Eighties arcade culture and science fiction