Everyone give it up for America's favorite fighting Frenchman 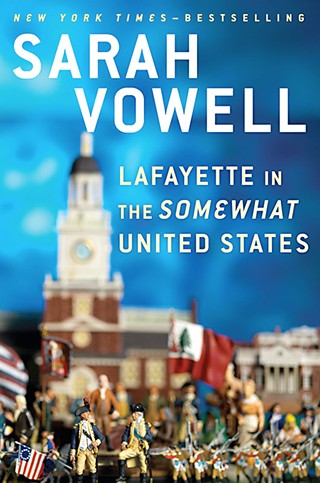 Who knew 2015 would be a banner year for our less popular Founding Fathers? When the U.S. Treasury announced it would be redesigning the 10-dollar bill, I recall three reactions: gasps of delight at the fact that we would finally have a woman on our currency, huffs of mild annoyance that deeply racist and scarcely loved Andrew Jackson would remain on the $20, and the sound of hundreds of fingers typing "Alexander Hamilton" into Wikipedia in an attempt to remember why he got on the $10 in the first place.

We've all remembered who he is and what he did thanks to Hamilton, the new biographical hip-hop musical by Tony/Emmy/Grammy-winner and recent MacArthur Genius grantee Lin-Manuel Miranda. On Aug. 6 of this year, after months of development at the Public Theater, the show opened on Broadway to rave reviews, but it was NPR's free streaming of the cast album in late September, a week before its official release, that catapulted Hamilton into the national spotlight.

Hamilton's overwhelming success has been attributed to its revolutionary (ha ha) nature: Innovatively mixing musical theatre's sound and structure with that of hip-hop makes it accessible across audiences, while its cast, composed almost entirely of people of color, is not only a radical act of creating racial equity in the theatre but also a bold re-envisioning of the American past for the people who make up America today. It embraces our national pride and mythology of the melting pot, even as it faces our country's considerable failings – our penchant for political squabbles, our appetite for scandal, I don't know, slavery? – without blinking.

Now comes a book that focuses on one of the American Revolution's more celebrated and less remembered heroes: Marie-Joseph Paul Yves Roch Gilbert du Motier, Marquis de Lafayette. While its aims and subject matter are akin to Hamilton's, Sarah Vowell's Lafayette in the Somewhat United States is a wryer and drier approach to the birth of America. In the musical, Daveed Digg's turn as Lafayette is charismatic and thrilling; his solo on "Guns and Ships," a song detailing the Frenchman's military achievements and vital assistance with French-American diplomatic relations during the Revolution, is the fastest Broadway musical performance ever, clocking in at 6.3 words per second. (Only Company's "Not Getting Married Today" keeps pace at 6.2 words per second.) The Lafayette that emerges under Vowell's gaze is more confounding than inspiring. His age is astonishing – he embarked for the colonies against French orders at a mere 19 years old – but so is his folly: pursuing his idealistic fixation on honor and freedom-fighting though it meant abandoning his pregnant teenage wife.

Lafayette retains the staples of Vowell's other books, such as The Partly Cloudy Patriot and Assassination Vacation: a travelogue element and impeccably droll turns of phrase. The former produces the most surprising and engaging scenes here, as in Vowell's run-in with Quakers who seek to dissuade her from writing another book about war. The latter provokes many a grin: "[At] least a third of the patriot soliders were shoeless – and one of the top two components of boots on the ground is the aforementioned boots." Or "The scene of Washington cussing out Charles Lee was for some reason not included in the series of bronze illustrations of the Battle of Monmouth ... [even] if it was the most New Jersey-like behavior in the battle, if not the entire war."

Vowell's interest in such friction – she calls it "our centuries-old, all-American inability get our shit together" – prompts the "Somewhat United States" of the title and leads to some of the most passionate writing here, as when she rebukes the Continental Congress and army for the self-inflicted slaughter that was the winter at Valley Forge – other troops for stealing supplies earmarked for soldiers at Valley Forge and Congress for refusing to levy taxes that would have gotten food and shoes to infantrymen who died from lack of both.

Only at the end of Lafayette does Vowell address what spurred her to pursue its subject: freedom fries. France's 2003 refusal to co-sign American military action in Iraq sparked a brief but potent wave of anti-French sentiment in which congressional cafeterias renamed the favorite side dish. Amid the complaints of betrayal, many Americans recalled the U.S.'s aid to France during World War II. But Vowell noticed that few traced our military cooperation back to France's invaluable support in the Revolutionary War. While Lafayette's 1824 return tour of the United States was considered a hugely significant historical event at the time, neither that nor Lafayette's original contributions to the war are prominent in our cultural narrative.

When it comes to the main characters of the Revolutionary War, Vowell is cool; hero worship of Lafayette or anyone else is not on the agenda. But by different means, she focuses on the same thing that Miranda fixates on with Hamilton: reclamation. Hamilton makes the story of an immigrant in the past about the immigrants of today. Lafayette follows as a boy becomes a man becomes a hero becomes a place – Lafayette Park, the eternal protesting ground opposite the White House. Miranda and Vowell help us reshape static and neglected figures of our history into calls to action. The revolution may not be over after all.

Lafayette in the Somewhat United States

A version of this article appeared in print on October 30, 2015 with the headline: Revolutionary Revival

Of Thee She Sings
A conversation with Sarah Vowell, America's patriot laureate