Traversing the dynamic history of El Día de los Muertos (the Day of the Dead) through various regions of Mexico, Mexic-Arte Museum's "Community Altars" stands more as a cultural lesson than an art exhibition. Its ornately decorated altars from 10 of the country's 31 states (Coahuila, Guanajuato, Guerrero, Jalisco, Mexico D.F., Michoacán, Oaxaca, Puebla, San Luis Potosí, and Veracruz) reveal the diverse interpretations that have developed toward the holiday across Mexico. The Mexico D.F. altar is perhaps the most grandiose, taking up a whole gallery wall, its bright magenta tiers adorned with marigolds, sugar skulls, portraits, and La Calavera Catrina, made famous by the Mexican artist and printmaker José Guadalupe Posada. Other regions take a more demure approach and incorporate local fare into their ofrendas, or offerings, that honor the deceased; the Veracruz altar, for instance, is decorated with shells and nets to represent the oceanside state. (There's also an altar for the city of Austin, highlighting the members of the visual arts community who have contributed to the success of Mexic-Arte over the years.) Wherever they're from, the altars are personal, beautiful, and compelling, and viewers will find themselves almost struggling to take in all of their details.

"Community Altars" does a good job of explaining the role the holiday plays in Mexican culture, beginning with its roots in both the pre-Columbian era and Catholicism. Unfortunately, the exhibition does little to bring the Day of the Dead into a modern perspective. Some smaller sculptures and video work help explore a somewhat contemporary view, but they are almost entirely overshadowed by the monumental altars. As Mexic-Arte embarks on its 33rd celebration of Día de los Muertos in 2016, it would be welcome for the museum to try and see this exciting holiday through a present-day lens.

"Community Altars: Ofrendas Inspired From the States of Mexico"

Mexic-Arte Museum, 419 Congress
www.mexic-artemuseum.org
Through Nov. 22
A version of this article appeared in print on October 30, 2015 with the headline: "Community Altars: Ofrendas Inspired From the States of Mexico" 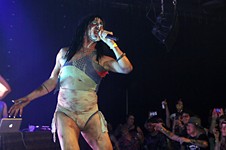 Gay Place: Pure, Unadulterated Hell
Christeene goes to hell and back for you