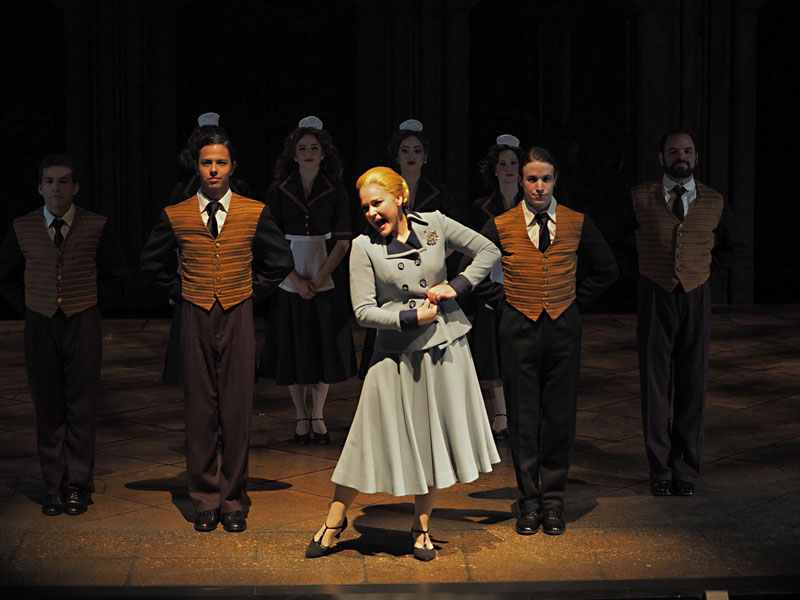 Madeline Trumble and the cast of Evita (Photo by Kirk Tuck)

In this season of political campaigns, it's interesting to see the rise and fall of a past leader, one who inspired real fervor rather than tired cynicism.

In life, Eva Perón was an entertainer in Buenos Aires who rose to become the first lady of Argentina. Through her charisma and determination, she represented a government of questionable success. She also captured the hearts of millions of Argentines, who mourned her death from cancer at the age of 33.

The Andrew Lloyd Webber-Tim Rice musical Evita, staged at Zach Theatre under the direction of Nick Demos, focuses less on the politics of her and her husband's (Matthew Redden) rule and more on how they sought, achieved, and handled power. In the title role, Madeline Trumble commands the stage with a convincing passion. This is a character who may or may not harbor a genuine desire to serve her people. What is more important is her powerful need for every single person in her city, her country, and her world to believe that she is the best person to serve them.

Wrapped up in the question of how much is Eva to be believed is also the suggestion that she used men – many men – to rise, dropping them as soon as they lost their purpose. It's a premise that was easier to accept in the decades since Evita was first performed in the Seventies. Contemporary feminism points out that men, too, use and dispose of women on their way to power and rarely come under criticism for it. Can her supposed promiscuity be used against her fairly? It is one of many questions given to the audience to determine.

If this were improvisation, in which the first rule is say "Yes, and" to every suggestion, the character Che (Andrew Foote) would be a failure. After every emotional moment, this quasi-narrator appears and says, basically, "Nope, not really." He represents the voice of the people who saw the bleaker side of Eva Perón's extravagance and ambition, and when the masses mourn her decline, he points out that perhaps Eva was not so great for Argentina after all.

To that end, Che is arguably a harder role to play than that of Evita, and it's one that Foote only partway lifts above the part of the complainer. The function of the character – to suggest that Eva Perón had her dark sides, too – is important for the play, otherwise it would be an unabashedly worshipful biography. Eva, standing on the grand balcony (set design from Christopher Oram) wearing diamonds and a white dress (costumes from Court Watson), is hard not to adore as she sings her heart out in the most remembered song from the musical. Would that Che had a less snarky means to provide a counterpoint to the heroine.

This production of Evita is polished, and the ensemble is engaging. It presents an angle on the art of politics that is at once cynical and admiring, an ambiguity that is perhaps useful against a backdrop of debates and looming primaries.