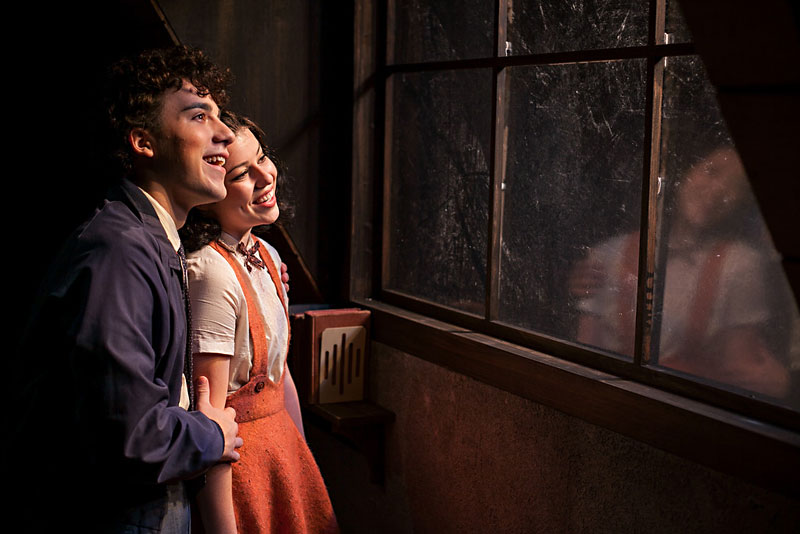 The Titanic will sink. The Alamo will fall. Lincoln will be shot.

Things will not end well for Anne Frank.

These facts are ingrained; there are no surprises here. The trick is not to focus on how Anne and her companions died, but rather (pardon the cliche) how they lived. The UT Theatre & Dance Department's impeccable production of The Diary of Anne Frank soars above the challenge in (pardon the pun) the loftiest of fashions.

From the first dimming of the lights, every element demands attention and respect. Sound designer Ben Campbell immediately sets an appropriately somber tone with a piano piece by Philip Glass. Under its minimalist notes, Mr. Frank (Eli Weinberg) wanders a ransacked attic after the fact, lost in memory and attempting – unsuccessfully – to maintain his composure in the face of tragedy. As present gives way to past, Anne's voice (Ellie Dubin) recites her first diary entry with certain quotes projected onto the wall of the upper loft – a lovely touch by projection designer Matt Smith that not only is aesthetically appealing, offering another level of sensory connection, but gives her words an added depth.

On their first morning in the attic, the Franks and company explore the nooks and crannies of their new home/sanctuary, beautifully designed by David Molina-Garza. The set dominates the Brockett Theatre – a three-dimensional masterpiece which seemingly enlarges the space while keeping the sense of close quarters that will slowly fray the nerves of its occupants. Po-Yang Sung wonderfully illuminates the space, expertly handling the difficulties of candlelight, lamplight, moonlight, and sunlight throughout. Her design echoes the rising and falling of Anne's inner self as she writes her way through puberty under extraordinary circumstances. Dubin plays Anne with just the right balance of spunk and precociousness coupled with the fear and uncertainty of a girl in frightening and uncertain times.

The script by Frances Goodrich and Albert Hackett is rather dense – not with heightened language but with an emotional thickness that could give way to melodrama in less skilled hands. Director Brant Pope understands that dramatic action is the foundation of theatre and has his very talented cast wrap themselves in each moment, living there fully before bravely moving to the next. The fact that these actors are students is forgotten. The fact that these actors are actors is forgotten, so great is their skill and dedication. Weinberg is a natural leader as Mr. Frank and Izabella Arnold a strong motherly figure as Mrs. Frank. Robert Di Donato plays Peter to a "T," while Kristen Raney draws us in as bookish Margot Frank. Chance Steward and Natalie Patton contribute stunning performances in their (far too) brief turns as Mr. Kraler and Miep. Of particular note are Baylie Figueroa and Ian Price, both creating such subtle and natural nuances in the Van Daans that they seem right at home, even in the fabulous period costumes provided by Kelsey Vidic. And the care with which Jadon Hatley crafts the cantankerous interloper Mr. Dussel is extraordinary. The ensemble is a well-oiled machine taking us through the incredible events of an attic in Amsterdam in the Forties.

And when it does come time to focus on the morbid destination rather than the journey, the event is handled remarkably. It is jarring, violent, though no real violence is seen. A tender moment is interrupted by the Nazi shoe these fugitives have spent over two years hoping would never drop. Jagged, random clips of terror at discovery plaster the wall of the loft where just moments before Peter and Anne shared thoughts on growing up and what the future would hold. We soon learn exactly what the future held for all the characters. It is in direct contrast to the story we've just seen, which could almost be described as light-hearted compared to how their stories end.

This production is a clinic in no-frills-necessary storytelling, devoid of the razzle-dazzle gimmickry often used to disguise a lack of compelling narrative. Both inspired and inspiring, elegant and deeply moving, The Diary of Anne Frank is a must-see of the highest order.