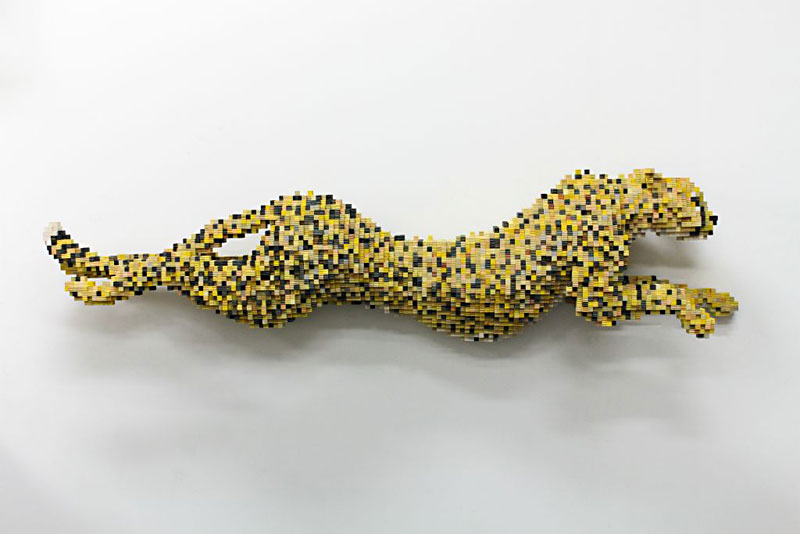 I must confess, I was not looking forward to the show. Sure, Shawn Smith's works are fine. It's just that his practice has struck me as overly stable – stable in every way, really: market potential, craft, and consistency in subject matter and form. Smith's found a recipe that works in most ways and has rarely deviated from it. But who can blame him? He's one of a few artists in Austin making a living off of his work, and most would find it unwise to risk upsetting that hard-won reality even if it means continually crafting the same sort of pixelated-looking sculptures of wildlife from blocks of dyed wood day in and day out for the last decade (yes, even before Minecraft).

So, moving through grayDUCK Gallery, I was pleasantly surprised by both the organization of the show and the relative risk evident in Smith's most recent works. There are still plenty of his classics dotting the walls, but, thankfully, most of these are placed in a way to add another layer to the art: a cheetah spaced just far enough from the gazelle she is chasing to have each read as individual works, but at a distance create a scene that extends the length of the gallery; or a puffer fish defending itself from a tiger shark swimming down at it at a steep angle. These works certainly have their appeal (they are impeccably crafted and visually stunning), but fall into either inaccessible or, more likely, shallow conceptual territory. There's some room to ponder these digitized sculptures when clued into Smith's urban upbringing and exposure to such wildlife solely through television and the Internet, but that's about as far as it goes.

Three of the most recently created works, however, deliver on Smith's more promising conceptual threads: his stated interest in evolutionary principles being applied to the digital world, our troubled relationship with increasingly intelligent programming, as well as the further incorporation of technology into our daily lives and even our own bodies.

Evolving is a crib with a swaddled baby whose face is depicted in Smith's usual pixel block form but bears four eyes instead of two, employing the classic double-face illusion that exposes our own hardwired neural programming in the form of facial recognition and simultaneously taps into Internet memetics. Becoming is a combination of 3-D printing and Smith's handiwork in wood taking the shape of a freestanding spine and brain, the smooth surfaces of both riddled with small pixel blocks like a parasite or perhaps the beginning stages of a transformation. Mimicry stands in greatest contrast to the rest of the exhibition: a diminutive figure wrapped in the actual fur of both a sheep and an Arctic wolf. Both pelts blend seamlessly into each other, the head of the wolf that crowns the figure's pixelated face appearing to belong to a creature twice its actual size. This last work's true-to-life texture and frightening form serve as a foil to the lighthearted, almost children's book sculptural renderings that line the rest of the gallery and is as markedly different physically as it is conceptually from the other works on display. The sculpture gives way to more menacing interpretations of our increasingly digital reality, highlighting the confusion of what is safe and what is not in our climate of ever-increasing connection.