Anne Washburn's inventive play shows how, after the apocalypse, we still cling to Springfield 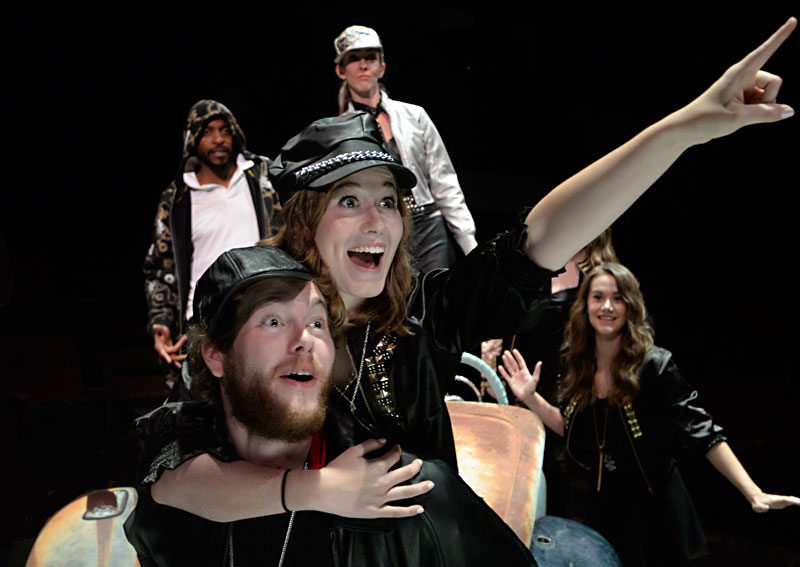 The apocalypse will not be televised. Our stories, though – like cockroaches and Twinkies – will survive in one form or another. Anne Washburn's Mr. Burns, a post-electric play takes us through civilization's end and rebirth with the stories we choose to tell, and how and why we choose to tell them.

Although The Simpsons is the linchpin of the play, one need not be steeped in Springfieldian lore to appreciate what is happening. Washburn's story is about humanity dealing with presented struggles, and the long-running series is integral; thankfully, though, both she and director David M. Long know the play is no more about The Simpsons than Battlestar Galactica is about space or The Walking Dead is about zombies. These are ingredients, not the whole of the meal. The jaundiced animated family is something remembered – clung to, as it were – after an undefined disaster leaves the human race without government, electricity, or hope. In this Mary Moody Northen Theatre staging, seasoned actors Jill Blackwood and Marc Pouhé lead a phenomenal ensemble of St. Edward's University students as survivors of the calamity huddled around a campfire, piecing together from memory the "Cape Feare" episode of The Simpsons. Our survivors are on the run from clouds of radiation spilling from nuclear plants with nobody left alive to prevent a meltdown. Leilah Stewart shows us a bit of these plants with a wonderful scenic design, dominated at the top of the show by a large glowing cooling tower. Once the tower retracts, the set remains sparse, allowing the players to bring set-pieces/props on and off as needed.

Throughout the play's three acts (which take place fairly soon, seven years, and, ultimately, 75 years after the apocalypse), lighting designer Sarah Maines keeps the center of Mary Moody well lit but the fringes appropriately dark, as if some unseen danger will at any time leap from the shadows to interrupt any attempts at normality. Whereas Act I shows our culture with the rug pulled from under it, Act II shows us how quickly we can bounce back. Not necessarily a good thing, mind you, as seven years later Washburn has her survivors perverting that glorious bit of shared memory into commerce. Our heroes sustain themselves as a traveling performance group, specializing in past pop-culture medleys and commercial re-creations. Entertainment has become a commodity used as currency. Act III shows us the results of society's demise as a musical, beautifully co-choreographed by Danny Herman and Rocker Verastique, with music direction by Michael Mckelvey. Whatever our society has become between acts II and III, this is that culture's passion play – a chronicle of the event that led to disaster, with the familiar figures from The Simpsons as the main characters. Pouhé is a standout as the maniacal villain Mr. Burns (an allegory for the radiation). Benjamin Taylor Ridgeway's costume work shines; each Simpsons character is identified not only by perfect costuming, but by designer Tara Cooper's incredibly intricate and accurate masks reminiscent of a Greek chorus.

Long pulls everything together wonderfully as we watch with fascination while civilization readjusts itself. He knows where to land the punches to elicit appropriately philosophical "what if?" musings from his audience, and a play this fresh and original deserves exactly the kind of skilled hand Long brings. The most amazing thing here is that replacing The Simpsons with just about any pop-culture phenomenon would still leave a thought-provoking look at the history of our potential future, a timeline of how our modern myths and legends mutate into reverence and, dare we say it, worship? It's not difficult to see why Mr. Burns, a post-electric play is one of the 10 most produced scripts in the country this season, and this production is a well-oiled meta machine, showing us the enduring power of theatre itself.