This philosophical debate between Sigmund Freud and C.S. Lewis is richest when it shows their humanity 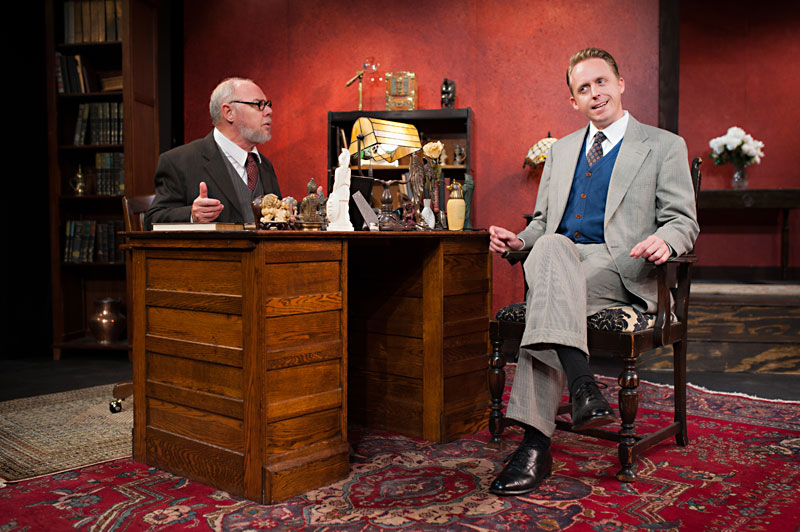 Fathers and sons. War and peace. Good and evil. God and Satan. Heaven and oblivion. The dualities under discussion in Freud's Last Session are as big as they come. Of course, who would expect anything less when you throw a pair of big thinkers like Sigmund Freud and C.S. Lewis in the same room? Playwright Mark St. Germain has imagined this philosophical equivalent of a heavyweight title match between the revolutionary psychoanalyst and the influential Christian writer (no record exists of the men meeting face-to-face), and with Freud's study in England as their intellectual boxing ring, the two go toe-to-toe on whether Jesus of Nazareth was divine or delusional, whether civilization has been guided by moral law or self-interest, whether suicide can ever be justified or is always a sin against life and the living. If such metaphysical matters engage you, then this Jarrott Productions staging, directed by Fritz Ketchum, might warrant your time. The playwright has done enough homework on his subjects and is deft enough in articulating their positions, and actors David Jarrott and Tyler Jones state the stances of Freud and Lewis, respectively, with such conviction, that their exchanges are spirited and on occasion pack some real punch.

Of course, this is one bout that we know is bound to be a no-decision. In pairing the obdurate atheist Freud with the unshakable convert Lewis, St. Germain has two combatants who stand their philosophical ground so firmly that neither is going to shift position in the slightest. So while their sparring may prick our brains and even prove entertaining – St. Germain shrewdly seasons the proceedings with humor, and the actors here know how to play it – it can't do much to generate dramatic suspense.

Fortunately, the playwright periodically pauses the donnish debate to show us these great minds as human beings, vulnerable to pain and suffering, and it's in these moments that the play and this production really breathe. From the moment Jones sets foot on Leslie Ann Turner's set – a den both cozy and exotic, with richly patterned carpets and Eastern art adorning walls painted a stimulating crimson – his Lewis is a warm presence, genial and willing to make jokes at his own expense, who imbues his defense of his faith with such a bright enthusiasm that when he characterizes his desire for God as "joy," it makes so much sense. But when Lewis recalls the horrors he experienced on the battlefield in World War I, Jones takes him out of the abstract and sets him squarely in the earth, amidst the broken bodies and the blood, shading him with such sorrow and gravity we see an affecting depth of humanity to his character. Jarrott's Freud has a like moment; though for much of the play, the actor maintains a professorial demeanor, distant and dogmatic, repeatedly jabbing his finger at Lewis as if at an inattentive student, at one point, Freud, beleaguered by oral cancer, suffers an attack so agonizing that he begs Lewis to pull a prosthesis from his mouth. The scene is harrowing, and Jarrott fills it with mortality – first, his character's anguish, then his desperate need for aid, then his relief and exhaustion. The pride and certitude of Freud fall away, and what's left is a sunken vessel of flesh, ashen and frail and so painfully human.

Much of the draw of Freud's Last Session is in that showdown between intellectual giants and their wrangling over matters that span the whole of human history and knowledge, that encompass Earth and heaven, but those are issues that the play does not – and cannot – resolve. What it can do, though, is provide a glimpse of the men those giants truly were and open the door to our acceptance of mystery in the world: in the variety of life, in the feelings we cannot explain, in the ineffable power of a piece of music. 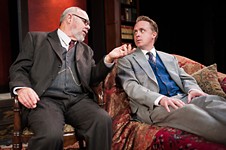 Freud's Last Session Opens in Austin
Actor David Jarrott turns producer to get a drama about Freud and C.S. Lewis onstage in Austin