For five years, the actress has been among the busiest and best on Austin's stages 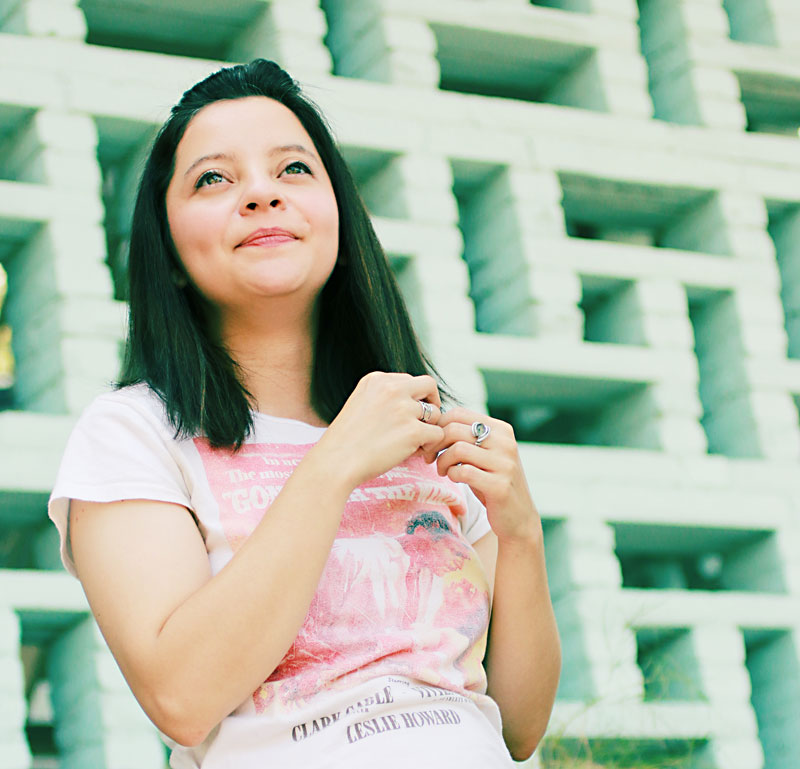 In the midst of a sea of anxious freshmen, she was an island of calm, possessed of an ease that eluded the 100-plus 18-year-olds filling the Literature & Philosophy class at St. Edward's University. That's what I recall about Gricelda Silva on first seeing her almost a decade ago. I was one of the new students who felt we were beginning a series of mind-expanding courses that would permanently imprint on us a sense of wonder about the world. She was the longtime teaching assistant for the course's professors, Dr. Cherry and the late Dr. Becker. We freshmen started the semester aspiring to a heightened way of living, one that intimately linked the arts, philosophy, and literature, but then pessi­mism and the cumulative effects of caffeine addiction kicked in, and that idealistic spell was broken. After four months, we moved on. But Silva stayed, reliving that class semester after semester as a TA, with the same readings from Gabriel García Már­quez, the same recording of Beet­hoven, on a yearly loop – and yet her sunny perspective on this curious look into the world never dimmed.

And from all appearances, it's shining as brightly now as it did during those undergraduate years, albeit in a new home: the Austin theatre scene. Over the past five years, Silva has steadily developed her craft as a performer, starting with productions at Austin Community College and rising to starring roles at Glass Half Full Theatre and Zach. Her versatile looks and diminutive stature have led to her routinely being cast as a child or the occasional magical sprite, but she moves with precision across the spaces she occupies and commands attention despite her physical size. Her Mexican heritage has also given her the opportunity to speak to two distinct local communities: Latino and Anglo. She's currently at work with the former, reprising the role of Anita in Teatro Vivo's revival of El Nogalar, a contemporary take on Anton Chekhov's The Cherry Orchard that was a hit this summer.

During brunch at Counter Culture in East Austin, Silva excitedly recounts her trip to Connecticut with Austin's Trouble Puppet Theater Company to attend the National Puppetry Festival in August. She's buzzing as she describes all the work she saw and knowledge she absorbed at the weeklong event. In one show, the artists excelled in creating depth of field with their shadow puppets, a skill that Silva and the Trouble Puppet team had been struggling to master. Afterward, Silva introduced herself to the cast and asked if they'd show her around backstage. There she found some DIY rigs consisting of deconstructed ironing boards on wheels with magnets fastening the puppets in place. The rigs' mobility let the puppeteers create depth without having to disassemble sets between scenes. Silva's eyes widen, and she throws her hands up in the air as she reveals their secret and blurts out, "It was fucking awesome!" Without so much as a pause, she launches into a plan to incorporate the technology into future productions.

This is the ebb and flow of Silva: insatiable curiosity that resolves into a solution. She's equal parts pragmatism and whimsy. It's that childlike inquisitiveness (and sometimes superstition) coupled with forceful ambition that brought her to theatre's doorstep in the first place. "It was a dare," Silva says. For her last semester on campus, she and a roommate challenged each other "to try a class that was outside of our comfort zones." Silva, who had left her hometown of Laredo to study criminal justice and psychology but dropped criminal justice in favor of philosophy after taking the aforementioned Literature & Philosophy class, selected Acting for Non-Majors.

Inside the university's Mary Moody Northen Theatre, Silva saw a side of herself unleashed. It excited her so that when she heard the theatre department was holding auditions for Chekhov's Three Sisters, she immediately immersed herself in the process. "Here was this thing that I didn't know anything about, an audition, and I just started studying," she says. "I started watching these movies and tracking actresses that inspired me. I thought, 'Why am I doing this? Why do I care so much?' I showed up to that audition very prepared," Silva laughs. She wasn't cast, so her flirtation with theatre at St. Ed's had a bit of a false start.

Still, she felt a nagging urge to continue acting. She remembers Googling "auditions Austin" to see who might be holding casting calls. On seeing that Cambiare Productions was producing a new adaptation of Orestes, she says, "I thought to myself, 'I could totally be Iphigenia.' I mean, why not?" She received two callbacks and was asked to read once more – but on a day that Silva had already dedicated to traveling back to Laredo to spend time with family. She insisted that she'd brought everything she could to her two auditions and that there was no way she could make a third but still hoped to be considered. She was not offered the role. Tormented by self-doubt, Silva questioned both her audition performance and her desire to put family before her art. Even more frustrating for Silva, the role she'd auditioned for was awarded to the same actress who had been cast in Three Sisters in the role Silva wanted. "I asked myself, 'Am I not needed here? Because clearly someone can already do this.'"

As a result, Silva set aside her dramatic aspirations to continue her primary studies. After graduation, she applied for joint Ph.D. programs in both philosophy and psychology – she excelled in both – earning admission into the prestigious program at Tufts.

But when the time came to move to Boston, something felt amiss. "These weird things kept happening," asserts Silva, suddenly becoming serious as she revisits this time in her life. A strange encounter with a potential roommate led to a winding narrative of awkward missteps that tainted her potential move. Silva saw it as a sign to stay in Austin. Just weeks before the start of the semester, she deferred her offer. She set herself back at square one, this time focusing on admission to UC-Berkeley. However, the program required that she learn French, so she enrolled at ACC to take a class. And while there, she found a class titled "Stage Movement," which boasted that it would teach students how to learn in their own bodies. Silva signed up and found herself under the guidance of Tongue & Groove Theatre Artistic Director David Yeakle. "He made everything so fun and inspiring," she says. "I was still learning French. I even made it to French IV! But I found myself [wanting to act] more and more."

The next ACC production was a group of short works titled B-Sides From the A-List. Silva auditioned for a certain role in one piece but noted on her call sheet that she was open to considering other roles and other pieces. She performed for the director Arthur Adair, of whom Silva says, "He's amazing. I learned so much. I'm very glad I know him and that we met." But he put the actors through a rigorous audition process, cutting loose those who couldn't name other characters from the piece or were ill-prepared with lines. Four actors were left for the lead female role, Silva among them, when Adair told the remaining contenders to leave the stage if they wrote on their call sheets that they would take any role. "I was on the verge of tears," says Silva, "I just kept thinking, 'Why? What is this about?' He wanted someone who only wanted this one role and wouldn't accept anything less."

As Silva left the stage, another director, Jodi Jinks, caught up with her and asked if she would consider auditioning for the plays Jinks was staging. She'd seen Silva's earlier auditions and told Silva that she had talent, noting that she possessed a gift in her attention to detail. Silva balked, since she hadn't prepared any other audition material. But Jinks persuaded her to try, asking Silva simply to mime taking a shower, an activity that just happened to be part of Samuel Beckett's "Act Without Words," which was part of B-Sides. Jinks cast Silva on the spot and informed her that the production would include puppetry from notable local puppeteer Connor Hopkins; Silva was entranced. After B-Sides, Hopkins recruited Silva for Trouble Puppet's adaptation of Frankenstein. While Silva's involvement with puppetry deepened, Yeakle reached out to Silva to ask if she'd be interested in the lead role in his stage version of The Red Balloon. Silva happily accepted.

That was 2010, and the requests for Silva's carefully deliberate and yet effortless talent haven't slowed since. She's kept busy on projects with Tongue & Groove, Trouble Puppet, Vortex Repertory, Teatro Vivo, and Glass Half Full Theatre, among others. Her intricate character studies and boundless commitment to expanding a role's potential have made her a compelling performer. She admits (somewhat bashfully) that she's auditioned "maybe five times total" since her early days at ACC. Her enigmatic reputation precedes her.

And it isn't just artists who have embraced Silva. She was voted Austin's Best Actress in the Chronicle's 2015 "Best of Austin" Readers Poll, where it was noted that "the vivacious performer's impact has left our city smiling and amazed." That follows the 2014 B. Iden Payne Award for Outstanding Lead Actress in a Drama for her work in Salvage Vanguard Theater's Pinkolandia, as well as honors from the Austin Critics Table this year for her lead performances in three shows: Changelings, Simple Sundries, and Cenicienta.

Those last two roles are indicative of what may be her most fruitful creative relationship, with Glass Half Full founder and Artistic Director Caroline Reck. Congrat­u­lat­ing Silva on her "BOA" win, Reck noted in a Facebook post that she's "had the privilege of directing this little one four times and performing with her three times in the past year alone!" When Reck's pregnancy necessitated that she not perform in Simple Sundries, she invited Silva to take the role. And when Reck was asked to help create Cenicienta, she said she'd do so only if she could make it for Silva. Alluding to future projects, she wrote, "I can't wait for you to make Peter into Petra in Peter and the Wolf and to Quixote your Sancho in 2016. I can't imagine Glass Half Full without you."

Silva recently took an entire month off to regroup, her first break since embarking on her theatrical career five years ago. She retreated to Laredo to spend time with family and, upon returning to Austin, quit her day job to pursue acting full time. When asked what's next, Silva mentions her return to El Nogalar but seems more interested in some potential solo projects. She pauses and says she's still trying to hone her inspiration before she makes any concrete plans. Assuredly, once she finds the spark, there will be no stopping her. 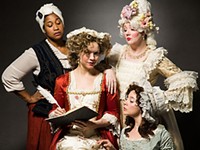