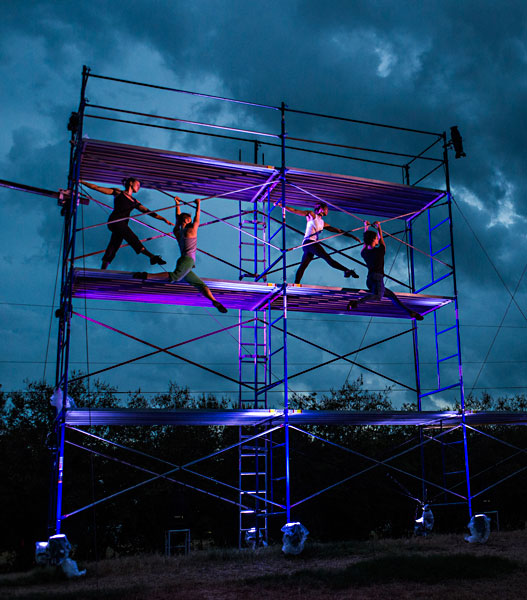 There isn't a building in sight. Which feels a bit strange for a Blue Lapis Light production, since so much of this aerial performance company's work has involved dancers moving atop, dangling from, and gliding across monumental edifices in the urban core: towering federal buildings, banks, hotels; the Seaholm Intake building; the Long Center; the Bullock; the Intel shell. Here, though, there are no skyscrapers to block our view of the stars, no rooftops from which harnessed dancers may descend, no soaring walls of glass for them to move over. The only man-made structure in this field in far South Austin is a scaffold rising just 25 feet in the air. And when the performers climb it and perch on its ledges and lean precariously from it, they have no rigging to secure them, no ropes to break a fall. All that holds them in place are their own hands and feet gripping the bars of the scaffolding. For those accustomed to the epic scale and breathtaking aerial artistry of such Blue Lapis Light works as In Light and Requiem, Edge of Grace may seem somehow incomplete.

But this is Artistic Director Sally Jacques returning to her roots, revisiting a kind of work she made in the years before her current company was founded and her dancers began ascending into the heavens in ever more spectacular ways. In those works, the performers never achieve flight; they may climb above the earth, but they're not able to break its bonds, and our sense of them as forever earthbound gives every grasp of a bar and pull of a body upward, every lean into the open air, every stretch of an arm into the sky a poignance born of vulnerability. We see them not as angels but as humans, struggling against the confining structures of the world. The tiered scaffold, with its bars and compact levels, is suggestive of cells in a prison, and when dancers are spaced throughout it, moving in unison, it calls to mind humanity in lockstep, trapped in routines of its own making. And because we're so close to these performers – close enough to see their muscles tense and loosen as they grip the bars and hang from them – they feel less like the mythic figures of Blue Lapis Light's grander productions and more like individual mortals seeking escape, seeking comfort, seeking peace. Even though their movements are at times abstract, their faces lacking emotion, their struggle feels personal.

Jacques has made this gesture to her past work to mark the new future of Blue Lapis Light, now that it has acquired its own studio and property, but as is often the case with this artist's work, the present is very evident in it. The restrictiveness of the scaffolding and of two adjacent walls that performers also scale and attempt to get over conjures images of refugees and immigrants who are confronting similar barriers across Europe and the Middle East and our own borders today. Though Jacques never has the movement explicitly reference such issues, the sense of them is in the dance, the spirit of their struggle inhabits it. That seeds the work with a power that, combined with the intimacy described above, makes this a uniquely compelling work from this company. When, after many sequences in which dancers have interacted only minimally or not at all, the sight of two of them kneeling in an embrace or facing one another across an abyss of space and extending limbs toward one another to make contact, it is deeply consoling. We often associate an edge with danger: a precipice from which we could fall into despair or death. But Blue Lapis Light shows here that such edges are also places where we may fall into another's arms – into refuge, into solace, into grace. 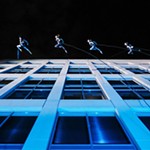