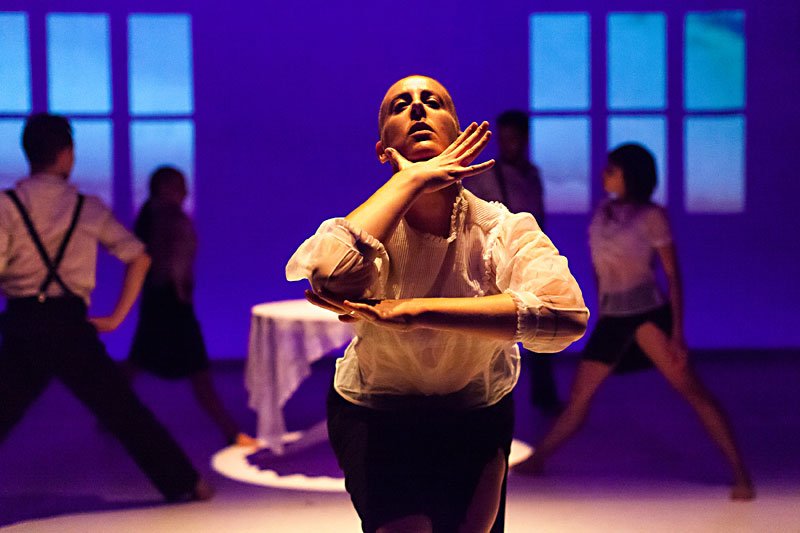 Erica Gionfriddo in The Warriors: A Love Story (Photo by Lynn Lane)

"I know what you're thinking" is an awkward declaration to be confronted with in the theatre. "This is weird," continued Eliot Gray Fisher, addressing the audience in Arcos Dance's multimedia performance The Warriors: A Love Story. But it wasn't at all what I was thinking. Only a few minutes into the show, I was already immersed in the world created and sustained by a true synthesis of dance, lighting, sound, video, and stagecraft. The reaching, frantic movements of figures in black skin-suits; a voice speaking in German, underscored by continuous rumbling; video projections distorting the shadowy figures onstage and depicting an air raid in brilliantly simple line animations – it all made heartbreaking sense. What was weird was the interruption.

One can understand how holding back such interjections might have proved difficult for Fisher, who, in addition to designing the video, wrote the script. The story of The Warriors is that of Fisher's own grandparents: Ursula Gray, a German dancer who survived the 1945 bombing of Dresden, and J. Glenn Gray, an American soldier stationed in Germany who later became a philosopher. Among his writings is The Warriors: Reflections on Men in Battle (1959), which, along with a trove of audio clips from interviews with both Grays, is a major source for the work. But the work universalizes Glenn and Ursula's story as a human story. When we heard Glenn say, "love and war are indissolubly linked," we pondered how this has played out in the lives we know. Fisher's periodic reminders that it's his personal story, too, felt at odds with this universalist bent.

Nevertheless, scene after scene of The Warriors resonated with skill, ingenuity, and emotion. The five dancers, in choreography by Curtis Uhlemann and Erica Gionfriddo, were sleek and powerful. As we heard Ursula recalling how her city was reduced to ashes, the exquisite Alexa Capareda, in a long A-line dress (costumes by Uhlemann and Bobby Moffett), allowed one flexed foot to float upward as though tied to a balloon, her body twisting away from it. A gas-mask waltz culminated in flashes of light (lighting by Michael Gionfriddo) and explosions of sound, richly layered over the orchestra track (sound design by Fisher and Uhlemann, with additional composition by Brandon Guerra). Avatars of a young soldier were spooked by their own reflections as trompe l'oeil video projections changed simple white panels into a collection of framed mirrors.

Several scenes earlier, Fisher had paraphrased the mirror story from his grandfather's book, as if to say, "It really did happen – it's not just a metaphor!" But, as we learned from the Grays' poignant reflections and by the performance as a whole, metaphor is not necessarily subordinate to reality.