From beak to talon, the Austin company's production of the cockfighting comedy is doused in talent and testosterone 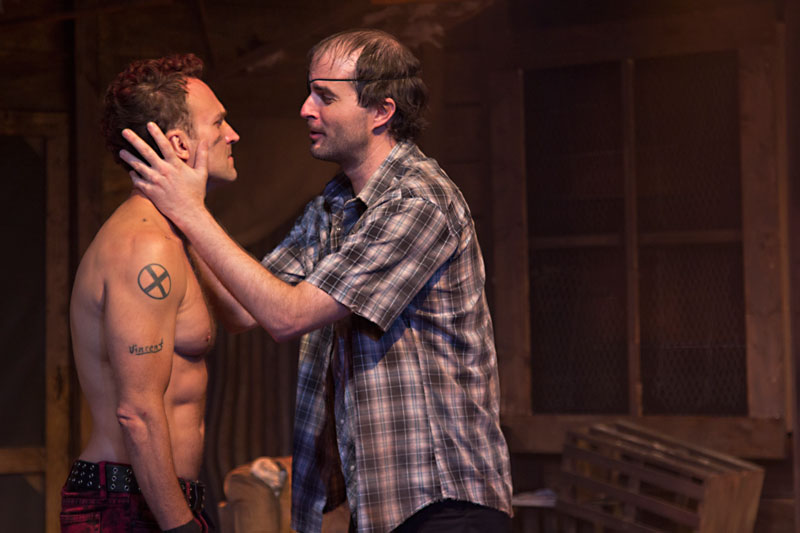 Capital T Theatre Artistic Director Mark Pickell is, pardon my ineloquence, one crafty sumbitch. Prior to opening the house for Year of the Rooster, he fills Hyde Park Theatre with haze, as not just an excellent and visceral mood-setting device, but also a clue as to how audiences might enhance their experience of Eric Dufault's captivating play, which at first glance appears a gritty, hilarious, and satisfying black comedy, doused from beak to talon in talent and testosterone. But peer through that fog and a stunning and powerful indictment of hypermasculinity comes into focus.

Dufault's tale of love, bravado, and cockfighting understands the consequences of its actions. Its deeply damaged characters, both human and avian, seem unable to alter their trajectories toward inevitable demise – knowingly or not, they are a danger to themselves. Jason Liebrecht leads the way with fire and fervor as Odysseus Rex, a fighting rooster of legendary lineage. Shirtless and decked out with a punk-rocker mohawk and MMA-style gloves (Cheryl Painter's costumes here tell all the right stories) and a frightening blade courtesy of Julian Whiteley, Liebrecht delivers a wide-eyed, seething portrayal, each tick and twitch timed perfectly, that draws us near the sympathetic warrior as he struggles through a bog of performance-enhancing drugs to understand his rage and purpose. Ody is the property – and last hope – of Gil Pepper, a former cockfighter who lost an eye to the game and sees this new battle stag as a gateway to the life for which he's struggled. Jason Newman's subtly terrifying turn as this sad-sack McDonald's employee living with his elderly mother makes painfully clear how hard Gil is fighting for a sense of assurance and assertiveness – a bar he's set for himself but that may be too lofty to reach – and Newman's precision in choosing between stiff silence and graceful vocal violence adds a fascinating depth to the character. On Pickell's set – mostly a shack of wood that adds an elementally masculine feel – Gil does battle with his own opponents: Dickie Thimble, a cockfight promoter in rural Oklahoma who fancies himself the torchbearer of an ancient, noble blood sport but who, in Ken Bradley's charisma-oozing performance, is a constant threat behind a charming smile – with a bit of switchblade-packing snake oil salesman to boot; Philipa, Gil's obnoxious, mouthy manager at Mickey D's and pseudo-love interest – a foil to Gil's ambition whose constant put-downs of Gil even as she shares with him her most personal dream (to visit Walt Disney World Resort) are offered with unwavering presence and indelible comedic timing by relative newcomer Julia Bauer; and Gil's mother Lou, a shut-in whose only joys come from an old shaggy dog (who may or may not be dead at any moment) and keeping Gil on a tight leash. In the hands of a lesser actor, Lou might seem an ancillary character, but the phenomenal Lana Dieterich breathes complexity into her, conveying Lou's fears of abandonment with ease.

Year of the Rooster packs into its first act enough bravado to script an entire WrestleMania – Lowell Bartholomee's exceptional sound work for the fight scenes makes it feel like a packed house with spectators hanging from the rafters, and Travis Dean's fight choreography plays viciously in such an intimate setting when Ody faces a Zen master rooster whose name is too hilarious to spoil in these pages. But the play willingly pays for its tropes by the middle of the second act, when uproarious laughter gives way to introspection. Dufault expertly gives his own story its comeuppance, with all the characters experiencing blowback from their own over-the-top archetypes. At its core, Year of the Rooster is about the pitfalls of pursuing ones goals incorrectly, becoming a caricature of "manhood" in doing so. The bravery with which this twentysomething playwright examines our zeitgeist by way of thoughtful bait-and-switch will likely leave audiences thinking differently about their own narratives on the drive home.

Year of the Rooster