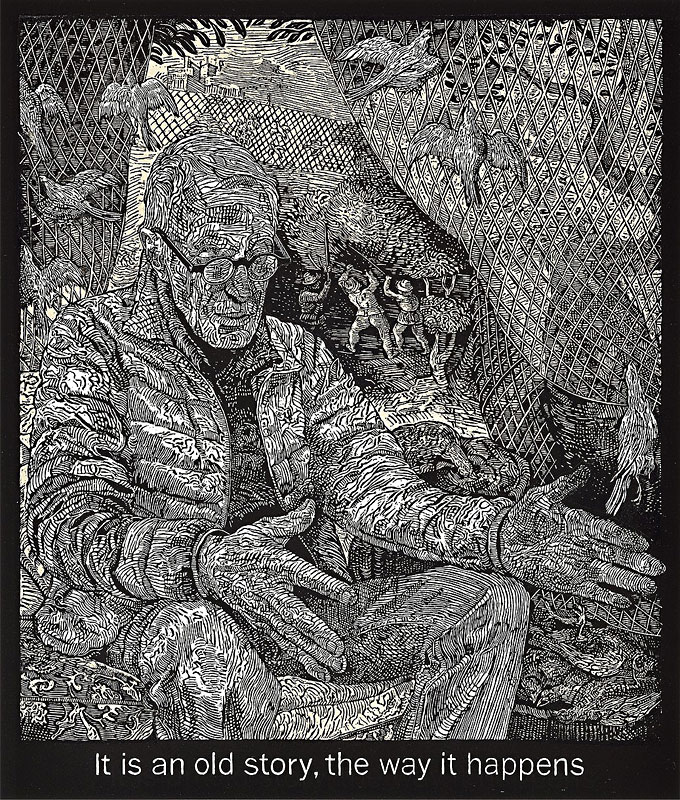 "You don't read poetry for the kind of truth that passes for truth in the workaday world," said the late Poet Laureate Mark Strand, in a Paris Review interview with Wallace Shawn. "You don't read a poem to find out how you get to 24th Street." Those words ring doubly true when viewing a recently published artist suite of 12 wood relief and chine collé prints by Alice Leora Briggs, each corresponding to a single line of Strand's poem "The Room." These works on display at Flatbed Press are printer's prints, to be sure, flexing the strengths and long narrative/illustrative tradition of the woodcut, but their vividness and textural intensity draw in the uninitiated with an equal pull. Neither Strand's poem nor Briggs' prints depict a clean-cut, discernible environment or storyline; instead, they present thick, tendrilly darknesses – some loose, phantasmagoric worlds made more of atmosphere and emotion than physics and facts, yet still hauntingly linked to the one we occupy.

A bearded man in shadow with cocked head looks sidelong as though listening intently to the parrot in his hand perched in profile. Behind them, archers from both sides fill a two-sunned sky with arrows. The image ranges from neutral to dark gray, the foreground achieving such through a mess of cross-hatching and the background employing a more traditional manuscript-like horizontal line technique. The image is framed by a black field in the bottom of which reads the 10th line of "The Room": "the green field where cows burn like newsprint."

Far from using the poem as a crutch, as can easily happen in works derived from others, each of Briggs' images stand easily on their own. Paired with Strand's words, however, the works form new meanings/confusions, leaving the viewer with a multiverse of tangled connections. The woodcuts are not simple depictions of the text; they do not illustrate the poem. Instead they act as a second but parallel sequence. The works influence the reader's perception of the text as much as the text influences the viewer's perception of the images and so form a perplexing trine when applied to our own reality. Experiencing the works together, one feels much like the characters in the poem or the images: lost, searching, with just enough information to try and make sense of it all, but without enough to ever succeed in doing so. That might sound like a dismal place, and maybe it is, but it's one that ends up being a hell of a lot more interesting than the seat of pure understanding and reason. It's a very real place, but one impossible to describe outside of the realms of art and poetry. 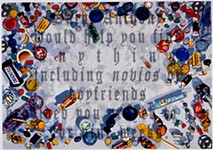 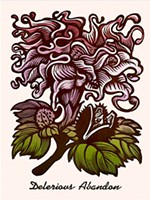