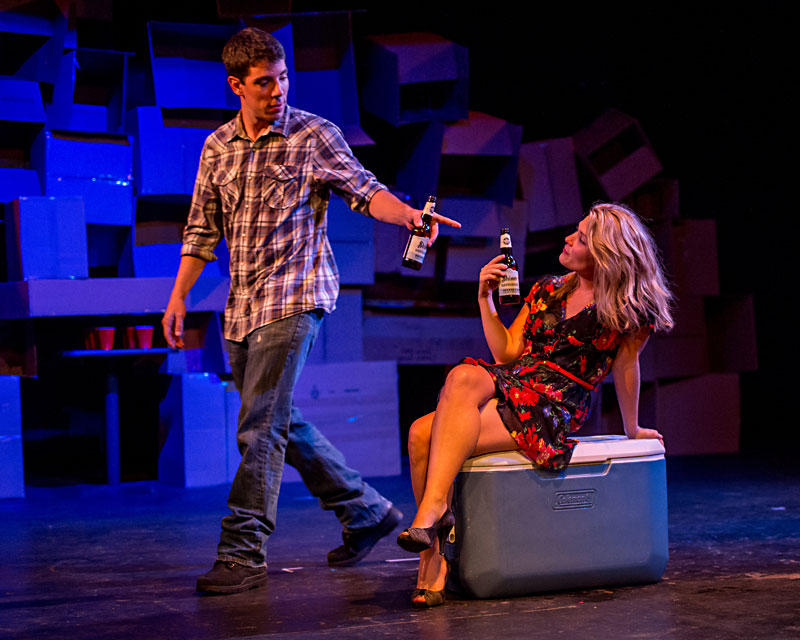 It is a brave thing bringing art into the world. Eternities pass in the minds of playwrights between an idea's conception and the first marring of a blank screen with rough, rude thoughts aspiring to convey meaning, connection ... empathy. At a certain point, a work must abandon the safe, comfortable space between artist and page and take a life of its own if it hopes to flourish. With this developmental production of Tender Rough Rough Tender, Sarah Saltwick boldly invites us into her process as part of her process – and does not disappoint.

This inaugural foray by groundswell (under the auspices of Rude Mechs' Rude Fusion program) is, in a word, sultry. The Off Center becomes home to the hottest Austin summer on record and the messy lives of two Austinites dealing with the heat both around and between them. As Mike, a firefighter dealing with the loss of a woman he was ultimately unable to save, Joseph Garlock is everything we know about a decent Austin fella. A roguish charm veils an emptiness, a longing for truth, and Garlock layers his character with an honesty that transitions seamlessly. Hannah Burkhauser plays Bell, a slinger of pancakes and evolving alcoholic. She handles the complexity of the character flawlessly, and her performance is an absolute pleasure to watch. The pair radiates a chemistry often difficult to achieve, and the resonance of their work pulls the audience right into the humid, challenging eddies of Saltwick's prose.

The direction, by groundswell mastermind Jess Hutchinson, is playful and inquisitive. Both Hutchinson and Saltwick (a Michener Center for Writers fellow) are recent graduates of the University of Texas, and hallmarks of that program litter the production. The team knows what questions need answers and has the play ask them both of itself and its audience. Hutchinson sprinkles the piece with sensuality, ritual, movement, and experimentation that complements Saltwick's already gorgeous wordsmithing. Rachel Atkinson's lighting splashes the stage perfectly, using color and hue to isolate and set the tone of each scene. The set, conjured by Anne McMeeking, gives us just enough to paint the scene in our minds without too much clutter. Particular kudos to McMeeking for accepting the challenge of several "in-bed" scenes, keeping the energy vertical and powerful. The soundscape, by Toto Miranda of the Octopus Project, pairs well with the other elements, supporting the mood but never overpowering it. Between effects of fire and rain (purposefully similar) and mood-setting tunes reminiscent of Explosions in the Sky, Miranda knows what we need to hear and when. Kelsey Vidic, tasked with realistically costuming an otherwise genre-defying play, uses the opportunity to highlight outfits as the masks our personalities don from moment to moment. Bell in a party dress tells a different story than Bell in her work attire. Most impressive is how all of these Longhorn-heavy design elements combine to tell the story so vividly, and speaks to the level of quality currently pouring from UT's theatre department and the Michener Center.

"Time is the school in which we learn, time is the fire in which we burn," ends a poem by Delmore Schwartz – a fitting quote for this work-in-progress. A post-show email inviting audience members to provide feedback on our experience proves groundswell's commitment to the story's enrichment. Imperfections exist but are forgiven, given the nature of the project, and to delve into them here would be of no service. Even in its infancy, Tender Rough Rough Tender is a long, slow sip of whiskey on a balmy summer's eve.