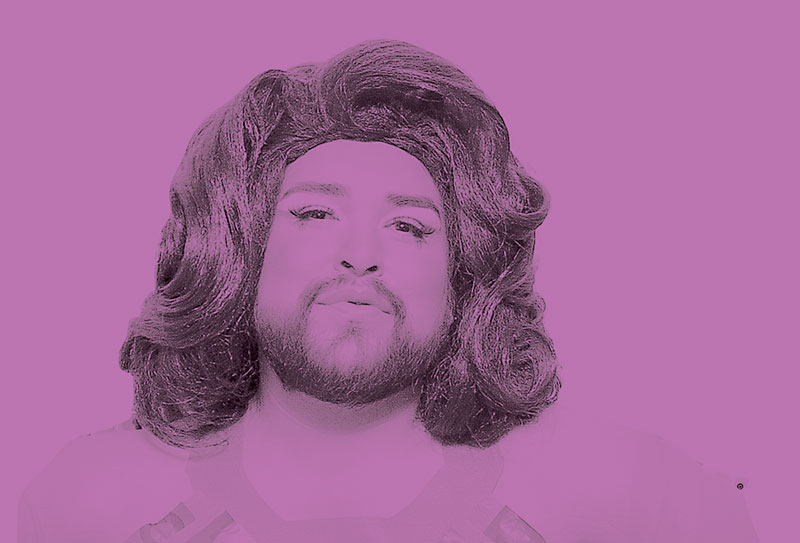 He rocks the gowns, glitter, and sequins with a full, lush manly beard. This self-professed "glam bear" performs monthly at Fat Bottom Cabaret's popular Midnight Menagerie shows in Austin. Dino Foxx is confident in his 6'3" without heels. But even a girl with a size advantage can feel vulnerable sometimes.

Burlesque shows draw dude bros, and Foxx has, on occasion, felt the need to preemptively top his audience. "You didn't know what the fuck they were taking you to tonight did you?" he'll say, laserbeaming into the eyes of some poor clod squirming in his seat. "That moment allows us both to laugh about it," says Foxx. "Then by the end of the night, those are the ones buying me drinks, and taking pictures with me. Because regardless of who I am, they can respect me as a performer."

The Menagerie, he says, "celebrates people of color, is body positive, size positive, welcoming of gender fluid performers, and reminds me of why I fell in love with Austin." Art is Foxx's arsenal. "You don't have to look a certain way to be glamorous. You don't have to follow the constructs of beauty as set by society in order of feel beautiful."

He doesn't mince words when it comes to LGBTQ political priorities. "I'm cynical by nature," says Foxx, especially regarding mainstream groups like the Human Rights Campaign. "I've come to respect certain strategies, but that doesn't mean my respect can't also be tempered by a lot of anger toward a dismissiveness of other issues – racial justice, immigration, and homeless LGBTQIA youth – certain things not necessarily honored with a $250-ticket HRC gala."

His reaction to the SCOTUS marriage equality ruling is complicated, too, he says. "Honestly, my first [feeling was] fear, because as a public figure who is often asked these questions, I know my answers piss people off. I'm happy and excited for my friends who worked very hard to achieve it, but [as someone who believes in polyamory] I struggle with the word 'equality.' We have the ability to create new ways of loving each other, yet we'd rather squeeze ourselves into that white picket fence that was originally built to keep us out."

Not one to offer critique without options, Foxx places a premium on love. "As an artist, I use my art to create nonviolent social change."

The stakes are life and death, as Morgan Robyn Collado and Jim Fouratt, have pointed out, but Foxx is specific. "It's violence. That's the core of my work: addressing the cycle of violence which many people of our community were born into, and haven't always had the resources to figure out how to break."

The cycle of violence is perpetuated not only by bio-families, but within our chosen communities, as well. "My biggest fear is that we all continue to move through time with all of our movements not speaking to each other and holding space for each other." In Foxx's formulation, equality is not simply the buzzword voted "most friendly euphemism for gay marriage" in the court of popular opinion, rather it's an invocation to a set of beliefs and principles that allow for us to care for one another. "It makes me fearful," says Foxx, "whether we will actually be able to ever live up to this idea of equality that we say we're about."