Ernie Cline Gets His Game on With Armada

For his second novel, the author of Ready Player One mines his love of Eighties arcade culture and science fiction 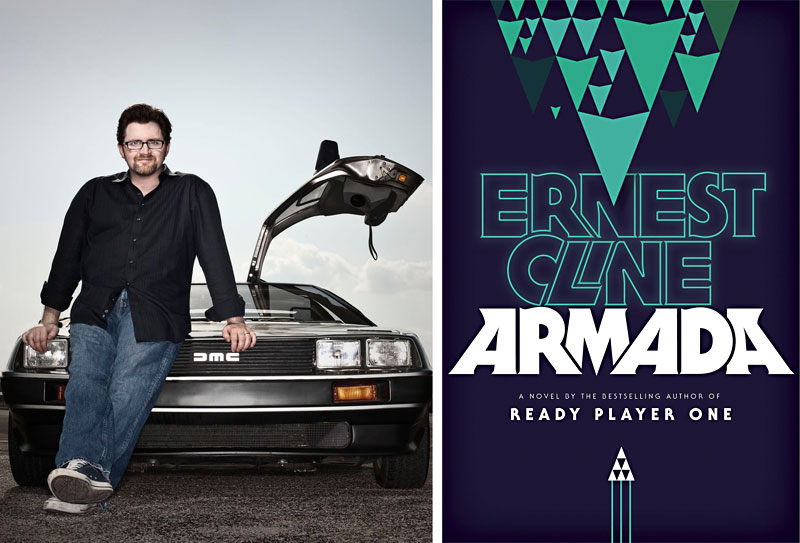 Austin-based author Ernest Cline hit the literary jackpot on his first attempt at writing a science fiction novel. Now he's back to play again, hoping to achieve another Top Score with a tale of alien invasion.

His first novel, Ready Player One, the tale of a treasure hunt in cyberspace, was a come-out-of-nowhere success in 2011, its book and movie rights snapped up to the tune of a half-million dollars each. Now Ready Player One is being turned into a big-budget movie. With Steven Spielberg as director.

How do you follow up that kind of unexpected success? With alien invaders, video games, and yet more riffs on Eighties pop culture and nerdish trivia. Armada, Cline's much-anticipated sophomore effort, is a high-concept humorous thriller that continues to mine the author's affection for arcade culture and Reagan-era sci-fi franchises, much in the way his first runaway success did.

"I loved Star Wars and video games and loved the way the two influenced each other," says the 43-year-old Cline, whose Ohio childhood was spent collecting video games and obsessing about George Lucas' galaxy far, far away. "Star Wars invented the [summer movie] blockbuster and reinvigorated science fiction," Cline said by phone prior to his appearance at San Diego Comic-Con. "And it happened right at the time of the birth of the video game, both the arcade games and the home versions."

Later, Cline read a magazine article about Atari's Battlezone, a rudimentary 3-D tank game, and how it was adapted by the military into the Bradley Trainer tank simulator. "That story just blew my mind," he says. "That as early as 1980, the U.S. Army had seen the potential of using video games as real-world training simulators."

Armada explores the connections between sci-fi, video games, military technology, and space flight through the adventures of high school student Zack Lightman, who one afternoon spies a flying saucer outside his window. Wouldn't you know it, his gaming skills make him a prime candidate to fly the warships of the Earth Defense Alliance. Before he knows what's happening, Zack is whisked off to fight invaders from the Jovian moon Europa.

Cline points to Orson Scott Card's novel Ender's Game and Joe Dante's movie Explorers as sources of inspiration, as well as the super-obscure Lou Gossett Jr. vehicle Iron Eagle. ("It's a video game movie that no one thinks of as a video game movie," says Cline. "It's kind of a mash-up of Top Gun and The Last Starfighter.")

In Armada, Zack studies the journals of his dead father (killed in a sewage treatment mishap) in an attempt to understand the elder Lightman's obsession with games, movies, and aliens. He discovers a detailed timeline that posits the question, "What if they're using video games to train us to fight without us even knowing it?" He also finds a Raid the Arcade cassette mixtape – heavy on the AC/DC and Queen – that proves crucial later on.

Part of what sets the narrative apart from, say, Flight of the Navigator is its characters' metatextual understanding of the cliches and tropes of science fiction. Even as he prepares for battle on a base on the dark side of the moon, Zack suspects there's something fishy about the invasion.

"If there was an alien invasion now, after 50-plus years of alien invasion movies and stories, we would have all these preconceived notions about it," Cline says. "And you would be shocked if it went down the way it had in some movie you had seen."

The author dedicated the new novel to his brother, Major Eric T. Cline, USMC, who has served in the Middle East as an explosives ordnance disposal technician. "They use robots to disarm bombs from 50 yards away, so they don't have to be next to them if they make a mistake," says Cline. "The controls they use for them are Xbox controls. It lowers the learning curve if the consoles are the same as the game consoles they grew up with."

In Armada, Cline combines the here-and-now idea of remote-controlled drones with a more futuristic possibility of "lossless" communication through quantum data teleportation, the ability to transmit information instantaneously across vast distances.

"When I watch Star Wars, I wonder why they can have faster-than-light holographic phone calls between different star systems with no delay at all," Cline says. "If they can transmit that much data, then they can control an X-Wing or TIE Fighter remotely, and they don't have to send [pudgy human pilot] Porkins or anybody else out to die."

Universal Studios has purchased the film rights to Armada, and Cline is working on the screenplay. But whatever comes next for him, Cline already regards his career thus far as "a dream come true."

"I think it's like 'An Occurrence at Owl Creek Bridge,'" he says, referencing the Ambrose Bierce short story. "And I'm just making it up in my head."

A version of this article appeared in print on July 31, 2015 with the headline: Game On!