For years, SXSW Comedy has been creating crazy buzz with all the high-octane stand-up talent that it's booked – Sarah Silverman, Fred Armisen, Marc Maron, Jenny Slate, Scott Aukerman, Kristen Schaal, Reggie Watts, Chris Gethard, Al Madrigal, Bill Burr, James Adomian, and that's scarcely scratching the surface – and shows that get raved about in an oh-God-you-had-to-be-there tone. The only problem has been that if you didn't have the badge or time required to work your way into those festival showcases, you had no way to be there and were simply shut out from the comedy magic being conjured at South by.

This year, that changed. Working with Showtime and Rooftop Comedy, SXSW Comedy taped a pair of its stand-up showcases at the North Door during this year's Festival, and now the rest of the world is finally getting the chance to experience stand-up, South-by-style. SXSW Comedy With W. Kamau Bell consists of two 80-minute specials featuring "some of the best comics who happened to be available at this hour." That quip by host Bell at the top of the first episode, which premieres on Showtime this Friday at 11:05pm, gets a deserving laugh, but the actual lineup makes clear that SXSW Comedy wasn't joking around when it assembled the stand-up artists for its first foray into cable comedy: Nate Bargatze, Matt Braunger, Wyatt Cenac, Joe DeRosa, Rachel Feinstein, Todd Glass, Jon Huck, Mark Normand, Iliza Shlesinger, and Beth Stelling. If those names are already familiar to you, you know that sides will be split when you watch these shows. And if they aren't, tune in and prepare to become a fan of these highly skilled, ingenious comedians.

Bell sets the tone for episode one with an opening set focused on his signature topic, race. This isn't a joke show that needs to warm up the crowd with a serving of bland stand-up standards – airlines, fast food, weed – before tackling the ticklish material. The comic who once hosted the FX series Totally Biased is all too happy to launch the proceedings by comparing the various racial attitudes in Jackson, Miss., and Madison, Wis., and he's sharp enough in his insights and winning enough in his delivery that his routine about being mistaken by white people for other African-Americans (Cornel West, Questlove) gets us all too happy, too.

The five comics who follow sustain Bell's vibe of irreverence, originality, comic deftness, and personal appeal. Beth Stelling, who greets the SXSW crowd by telling them "it's so great to be here instead of being married and having kids," mines her Midwestern roots for material, but with a dark absurdism behind that cheerful smile. Even when she's talking about her pregnant sisters in Ohio or her mom getting flummoxed by security questions on her Sprint account, Stelling finds a subversive twist that surprises and delights. Nate Bargatze, another heartlander originally from Tennessee, is even more clean-cut and mild-mannered, but he employs a deadpan delivery that makes his extended ridiculous anecdotes – confronting a guy he's convinced is "fake blind," making a surprise appearance in the middle of his father's magic act – all the more hilarious. (Best insight into his profession: "When you do stand-up in front of people that are not expecting stand-up, it doesn't come off as stand-up. It comes off like a mean speech." Completing the congeniality trifecta is Mark Normand, who's introduced by Bell as one of the nicest guys in comedy, but who goes on to tread the minefield of racism even more daringly than Bell does, prodding the audience with observations that dig under the audience's skin and reactions to skin color. He sums it up by saying, "I look at racism the same way I look at Nickelback: It's fun to joke about, but you never want to see it live."

Then there's Iliza Shlesinger, a Texas native who nails the SXSW experience as "one festival of lines": "No one's eating. No one's doing anything. It's just you get in line for a line that feeds into a line. For hours. 'I thought we were gonna go look at this new app, but then I got this cupcake that looks like a phone charger. Thanks, Samsung.'" She's the highest energy, most animated, and most theatrical of the first episode's comics, with a gallery of hysterical character voices and arguably the most quotable one-liners: She critiques her own outfit as "Wednesday Addams managing a Rag & Bone." "Silk blouses are burqas for American women." Skinny jeans are responsible for "a whole generation of Despicable Me legs."

Matt Braunger closes the episode by telling the Austin audience that it's "great to be here in Cowboy Portland." Then he's off on a range of different topics from unpredictable directions, comparing horniness in men and women with economic similes (the former like "the British pound: always strong, always there," the latter like "the Italian lira: worth nothing, millions to a dollar"): detailing the pain of a deep tissue massage ("Secrets are flying out of my mouth: My PIN number's 5959! I buried gold in the yard! I'll tell you where it is!"); explaining how "dude" can instill guilt when darted at a group of college boys – or, as he dubs them, "a keg of bros."

If you like your stand-up with that kind of out-of-left-field edge, you'll want to catch this and episode two, airing in August, with Daily Show correspondent Cenac, Feinstein, Glass, Huck, and DeRosa.

The SXSW Keynote by Elon Musk Is James Adomian's Future Shtick
A satirical look at what lies ahead for humanity, as the SpaceX founder might envision it 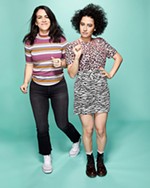