When it rains, it pours. And pour it does in Andrew Bovell's When the Rain Stops Falling, a tightly written drama in which the trope of rain and its ability to shape geography is salient throughout. In light of Central Texas' recent torrents, Different Stages' production felt a bit like proof of the adage that art imitates life – particularly after the somewhat eerie coincidence was pointed out by director Norman Blumensaadt during his curtain speech. But water droplets are not the only things falling from the sky in Bovell's play. It's also raining fish.

That curious object descending from the clouds provides the start to a surrealistic time warp of a ride. From the moment the actors take the stage in the opening tableau vivant, their umbrellas popping ominously as they open against sound designer Jeff Miller's persistent rain effect, it's evident that the journey ahead will be a strange mix of naturalism and anything but. A long-lost son returns home to see his father for the first time in decades, but then the story unfolds with flashbacks and flash-forwards of the various characters at various times in their lives. Occasionally we even catch a glimpse of the same character at different points in life, side by side onstage. Nothing ever feels too far from potential reality – this isn't magic realism – but keeping track of the different narrative threads in the writing process must have been daunting, to say the least. (Thanks to Different Stages for including a diagram of the family tree in the playbill so we're able to follow the proceedings more closely.)

It's a dark ride, full of themes that aren't suitable for the kids. And it's definitely not a piece of theatre geared to provide an evening of escape; this is an experience that requires a heightened level of focus and a desire to think on the part of its audience. Bovell's dialogue is smart, intense, and direct, and the ways in which the playwright develops Rain's intricate character relationships is tour de force writing.

Staging by Blumensaadt and assistant director Carol Ginn is simple and effective, allowing the text to breathe and strong cast the girth to plumb its depths. Similarly streamlined is Ann Marie Gordon's set, which smartly provides everything needed to support the story while steering clear of any intrusion. Emily Cawood's costuming does its own work in clarifying elements of character connections and time periods, and Bill Peeler's lighting design creates appropriately low-tech and beautiful, apparitional visuals. A robust cast delivers the tragic story convincingly, with many standout performances.

The rain does eventually stop falling over London and Australia in this play. But the fluidity of the writing and execution of Different Stages' production stay with you long after. 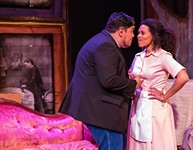