With more than the usual musical suspects, the ASO managed to make its 39th July Fourth concert a rousing success 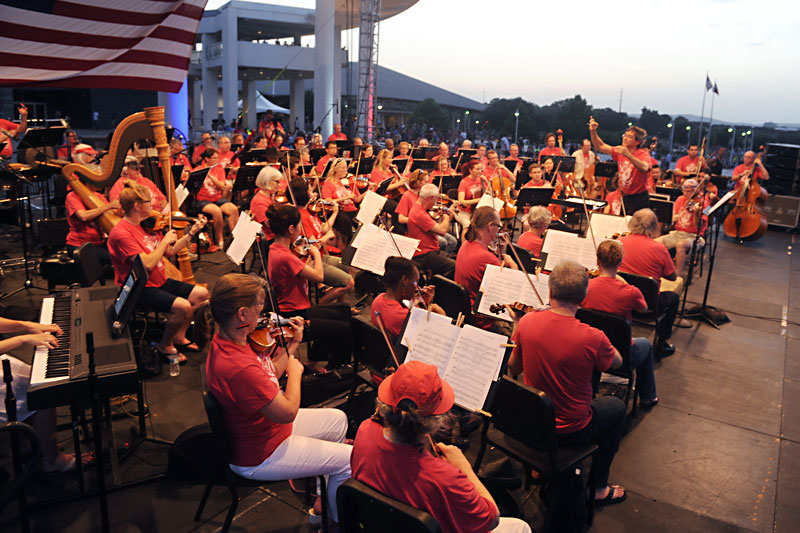 Programming a Fourth of July concert must seem like something most Americans could do in their sleep. Just plug in the musical equivalent of the red, white, and blue – our National Anthem, one or more marches by John Philip Sousa, and that inexplicably ubiquitous Tchaikovsky overture that isn't even about our War of 1812 – and you're golden. But while it's true that no conductor worth his star-spangled salt would strike up the band on the Fourth without that holy trinity of patriotic tuneage, it's the music played with those indispensable Independence Day numbers that makes such a concert memorable. Just as you want an array of different firework types – Horsetails! Flying fish! Crossettes! – to make those requisite peony and chrysanthemum bursts seem as dazzling as ever, you want songs and selections that play well with those Yankee Doodle standards and set them up so they get everybody's patriotic hearts a-pumpin'.

Peter Bay gets that, which is what makes the Austin Symphony Orchestra's July Fourth concerts more than just another roundup of the usual musical suspects. This year, for instance, the maestro followed "The Star-Spangled Banner" with a tour of the West via a pair of motion picture scores and a prime example of 20th century American regionalism. Now, How the West Was Won (1962) and Silverado (1985) likely don't command the kind of widespread recognition they did a generation ago, but both of their Oscar-nominated scores – by the masterful Alfred Newman and Bruce Broughton, respectively – hold up well, evoking our frontier spirit in that robust, sunny way only Hollywood can: French horns sounding out majestic vistas, percussion thundering the gallop of horses, strings racing alongside. This is music that drops you in the middle of Monument Valley, barreling along like a rider for the Pony Express. Similarly, Ferde Grofé's Grand Canyon Suite – an ancestor to those great scores of the movie Westerns from which many a film composer borrowed – takes you right to the rim of that natural wonder. Bay really responds to the drama in film scores, and he's able to inspire his musicians to the heights and depths of emotion in the music, to tease out the tension, the conflict, the wonder. And in works like Grofé's and Tchaikovsky's 1812 Overture, he's able to mine the drama from them almost as if they were scored for the silver screen. Sitting under the darkening skies over Vic Mathias Shores on Saturday, I could almost see the Russian armies clashing with Napoleon's forces and ultimately turning the French cannons against them.

The ASO's reading of that July Fourth staple came across as fresh in part because Bay had taken us on that bracing journey into the Western landscape, reminding us of the great expanses of our homeland and what it took to settle this nation. The drama in it, and in the National Anthem and the Armed Forces medley and the 1812 Overture and yes, those Sousa marches, seemed of a piece: all part of the 239-year-old drama of the U.S. of A. Getting the attention of 100,000 people picnicking in the open air and waiting for explosions in the sky isn't easy, but Bay and his orchestra managed it, and made their 39th Independence Day concert, quite literally, a rousing success.