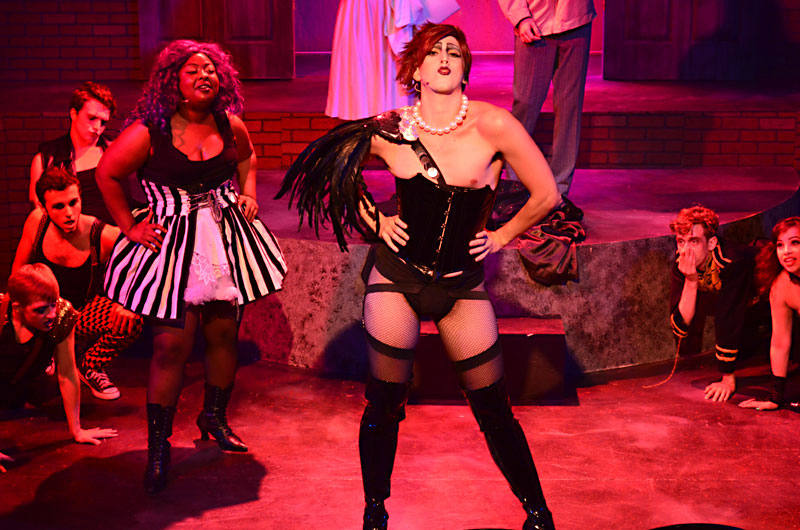 The first time's always a bit awkward, isn't it? Especially if you're the only one who doesn't know what she's doing. But virgins, have no fear – Rocky Horror virgins, I mean – Doctuh Mistuh Productions' staging of the campy sci-fi send-up holds your hand the whole way through and sticks around to cuddle afterward. If you've never seen the iconic 1975 movie, if you've never thrown toast when one is proposed, don't be afraid to let Doctuh Mistuh provide you with your first experience – in fact, I can think of no finer inaugural experience. As per usual, DMP's talented team pulls out all the stops to create a top-notch production that will prove satisfying whether you're a first-timer or a little bit more, uh, experienced. (Slut!)

A Rocky Horror virgin myself (I know, I know), walking into Salvage Vanguard Theater was a bit daunting, to say the least. Having already seen DMP's fantastic production of Heathers, I knew to expect a high-quality product, but was a bit nervous about diving headfirst into the cult hysteria that is Rocky Horror. Apprehensions were assuaged when the performers addressed the audience and taught us the callbacks we'd need to know before kicking off the show, making the experience inclusive for virgins and die-hard fans alike.

Still, not knowing exactly what you're in for makes for much of the fun – it puts you in the same boat as Brad and Janet, the wholesome, wet blanket of a couple whose car troubles lead them to the creepy castle of Dr. Frank N. Furter. A plot description would be a waste of time – there isn't much of a storyline, anyway – but the next 90 minutes are filled with a delightfully wacky fanfare of song, dance, and lampoon, in the style that the Doctuh Mistuh artists have proven themselves to be masters of.

In a mostly plotless show, the characterizations become crucial, and this cast has the pomp and flair to provide high entertainment. Chase Brewer as Brad Majors brings a hilarious physicality to the role, making the world's most boring guy actually quite fun to watch. As his similarly bland fiancée, Janet, Haley Smith's lovely singing voice and comic expressions are a nice complement. The show, of course, belongs to Dr. Frank N. Furter, played by a sensual Gray Randolph, who pays a well-performed homage to one Tim Curry. As I said of this group after seeing Heathers, there isn't a single performer who disappoints, but Keaton Jadwin as Riff Raff, Michelle Alexander as a fiery Magenta, and Sarah Zeringue as Columbia all give performances that are especially polished and zany. And tying up the tale's loose ends is a sinister Stephen Mercantel, whose comic narration keeps the laughter coming even in the show's calmer moments.

Perusing the program reveals that many of these fine young artists are new to our stages, coming from Pittsburgh's Park Point University (where director Michael McKelvey is a professor), University of Oklahoma, and elsewhere. These are out-of-towners that the Austin theatre community welcomes with open arms. Catch them before they're lost in time and space forever. 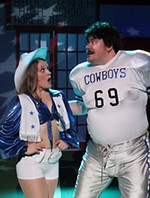