Break Into the Future

It's a new day for chamber music, as the Austin Chamber Music Festival shows 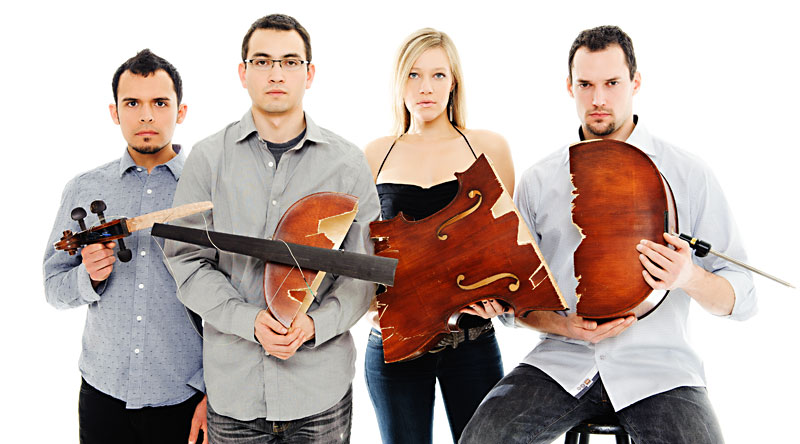 The Austin Chamber Music Festival is once again upon us, so may we take a moment to talk about Game of Thrones?

Not because the vicious skulduggery at work in Westeros can be found among the string quartets that play this summer music tradition. Rather, it's because one of the ensembles playing ACMF this year covered the theme song to that hit HBO series and the YouTube video of it has been seen by – are you ready for this? – 7.79 million people.

When a small group of classical musicians can reach those kinds of numbers on that kind of platform playing that kind of material, well, friends of chamber music, we're not in the 19th century anymore. Or the 20th, for that matter. Gone are the days of just the same-old, same-old instrumental groupings (piano, violin, cello; two violins, viola, cello; etc.) with their by-the-book monikers (Such-and-Such Piano Trio, Blah-Di-Blah String Quartet) dishing up the usual powdered-wigged suspects (Mozart, Beethoven, Brahms, et al.) in tasteful salons for well-heeled patrons of a certain age and income bracket. Now, we're talking groups that may be three cellos and a percussionist (!) going by a name like Break of Reality (!!) and mixing its Bach with a little Metallica or Tool (!!!). And you're as likely to find such a group rocking millennial hipsters at the Lancaster Roots & Blues Festival or South by Southwest as pleasing AARP elites in some society swell's swanky parlor. That's the story with our GoT cover band, which has been able to build its multigenerational, multigenre following with the aid of such of-the-moment platforms as iTunes, Pandora, Facebook, Twitter, and, of course, YouTube. Break of Reality is no less rooted in the classical tradition or training than its forebears in the chamber music field – it was founded by a bunch of students at the Eastman School of Music – but it reflects a movement toward ensembles shaped as much by popular music as classical and unwilling to give up either when it comes to what they play.

Austin Chamber Music Center Artistic Director Michelle Schumann gets that, and she's made a point of programming more groups like Break of Reality in the center's annual festival. For instance, this year sees the return of Time for Three, another unorthodox combo (two violins and a double bass) of old music-school chums (Curtis Institute) with a penchant for mixing the old and new – say, jumping from Rachmaninoff to "Danny Boy" or mashing up Stravinsky's Firebird Suite and Katy Perry's "Firework." Their 2013 debut at Antone's was such a hit that Schumann was eager to book them again. And who's kicking off this year's fest? None other than Mother Falcon, the homegrown indie orchestra whose members received some of their early training from the Austin Chamber Music Center.

Now, this doesn't mean that ACMF has turned its back on chamber music's past. With the American String Quartet performing Mozart, Miró Quartet performing Schubert, and Ida Kavafian and Peter Serkin playing three Beethoven violin sonatas, the 2015 schedule is still showcasing the traditional form at its finest. But before you make a final call about who you're going to see at the fest this year, have you seen that YouTube video of the Game of Thrones theme?

Break of Reality
Thursday, July 9, 7:30pm, the North Door
This band of "cello rockers" thinks nothing of linking J.S. Bach with Nine Inch Nails, Radiohead, or the Game of Thrones theme.