Recent years have shown there are just so many directions you can take the Sherlock Holmes stories. Many of the latest dramatizations have been dark, modern interpretations of the idea of the tortured genius.

Not this time! Penfold Theatre Company mounts this new adaptation of The Hound of the Baskervilles by Steven Canny and John Nicholson for its annual family-friendly outdoor show, staged at the Round Rock Amphitheater. This telling of the Gothic mystery gives a nod to the dark suspense in Sir Arthur Conan Doyle's original story, but beyond that, it's more comedy than thriller. The humor is broad and accessible, powered by the slapstick physicality and great timing of the small cast under Emily Rankin's direction.

As the story goes, Sherlock Holmes (Eva McQuade) and his loyal but, in this version, feckless assistant Dr. Watson (Ryan Crowder) are asked to protect the final heir in the Baskerville line (Toby Minor) from the family curse: a huge, mysterious hound that has murdered previous Baskervilles in the swampy moors surrounding the estate. Each of the three actors plays several roles among the colorful lineup of suspicious characters who greet the heroes upon their arrival. Despite Watson's silliness, Sir Henry Baskerville's stubbornness, Holmes' arrogance, and the occasional freight train that passes near the amphitheater, they eventually prevail.

While this production of The Hound of the Baskervilles wouldn't exactly qualify as theatre for young audiences, it's goofy enough that pretty much any kid whose bedtime will let her stay up for the performance ought to enjoy herself. Audiences of any age should should admire the physical talents of the three actors, especially Minor. If you watch for them, there are moments when it's obvious that this is a cast of actors who have studied their craft for years.

Folks hoping for some Benedict Cumberbatch fanfic will be disappointed. Sherlock Holmes purists and experts on the Victorian-Edwardian periods may also find themselves let down. But taken for what it is – a G-rated summer show to be enjoyed with an evening picnic – Penfold's The Hound of the Baskervilles satisfies. 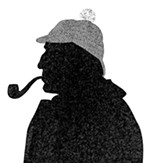 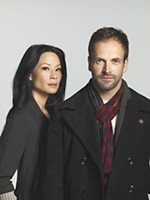