All Over Creation: Come and Don't Get It

You have a job; you don't need to make another one out of figuring out art 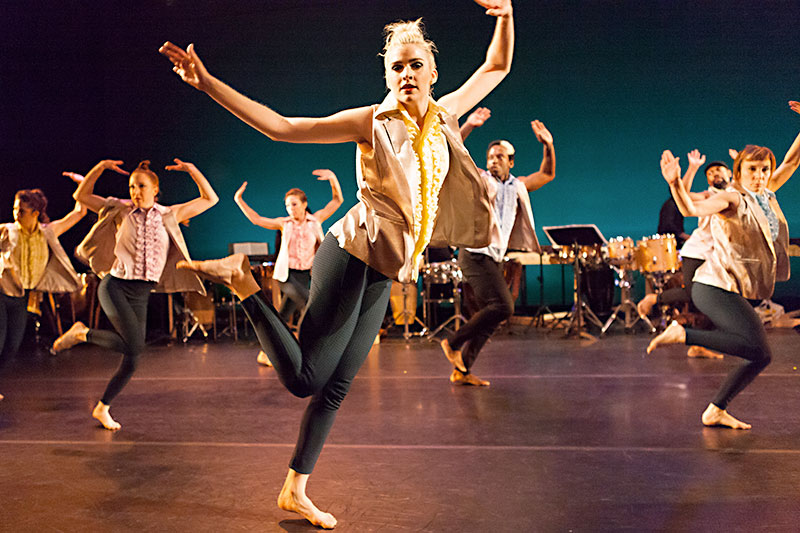 The word came right from the artistic director herself: In the dance we were about to see, there was nothing to "get." No weighty symbols, no coded messages. Just bodies moving through space in a movement exercise that she – Kathy Dunn Hamrick – had undertaken with four other choreographers to shake up her usual creative process. We in the audience were free to let the dance wash over us, to "people-watch for the next hour," she said. And as Arts writer Jonelle Seitz noted in her Chronicle review of KDH Dance's More Than One Complication, "Hamrick's permission to detach – to be voyeurs, lurkers – was a welcome reprieve."

I felt it myself, that wave of relief, of being let off the hook for some interpretation of the work I was about to see. Indeed, I may have sighed more than most. See, just two days before, I'd been over at Women & Their Work, looking at the Olivia Moore exhibit "Between Here and There," and as I was wandering among the installation's biergarten benches, steel booth frame, and wheel-like sections of rolled-up posters, that pressure started sneakily gathering at the back of my brain, the pressure to get what the artist meant by all of it. For whatever reason, Moore's work and I weren't speaking the same language and rather than let that just be the case and simply observe and respond to what I saw, some part of me felt compelled to treat the gallery like a crime scene, gathering clues in order to form some theory of her artistic intent and meaning.

I've written about this before, my proclivity to engage intellectually with art on contact and keep my brain processing what I take in, actively sifting through the input for layers and patterns. In doing so, I've laid a certain amount of the blame for that at the feet of my profession: Critics are expected to deliver their take on whatever exhibition, concert, or play they've experienced, ingesting the art and instantly disgorging an astute analysis of form, function, content, and context. But now I don't feel the condition's limited to those of us who spout our opinions for pay – why else would Hamrick have told the entire audience not to worry about getting her dance?

That, I fear, is a reflection of this mindset going pandemic, afflicting more folks than not when they confront contemporary art today. Face to face with music or sculpture or theatre or dance that's rooted in the creator's deeply personal vocabulary, that seems seeded with obscure meanings, we reflexively set out to unearth them, to dig up the buried treasure. In itself, that impulse isn't awful; it's establishing a connection with the art and drawing us closer to it. But when that's all we're inspired to do, when the only point is to unlock the puzzle, then we reduce art to the level of a Highlights Hidden Pictures page – actually, to something worse. Finding what's hidden on the Highlights page is fun – we approach it as a game. We approach deciphering the meaning in art as something important and grave, a chore. That's why Hamrick's "permission to detach" was so welcome: We were getting out of a job.

To see art as a task, as a duty, as work, is to blind ourselves to many of the aspects that make art worthwhile: the passion it displays, the beauty of its form, the simple spark of creativity behind it. When I was so focused on getting under the skin of Moore's exhibit at Women & Their Work, I was overlooking the obvious pleasures there: the sumptuous shades of orange utilized in the tiles of her entry wall, the care with which her Ghost Station's steel frame was constructed, the subtle graininess and flecks of color in the pulped posters pasted on the wall and illuminated. Never mind buried treasure. Here were riches right on the surface. But it took a certain disconnection from my mental process to realize that.

So it proved with Hamrick's work. No need to divine the motivations behind the motions; tracking the highly charged, crisply coordinated, kinetic movements of the eight dancers – or of the half-dozen percussionists hammering out the live score behind them – was sufficient to derive satisfaction, or certainly stimulation, from the performance. And it turned out being open to the work on that level meant I was open to it in other ways as well, to its tensions, its seductions, its surprises, its gifts. But I might have missed out on all that had I been subsumed in my usual job of thinking through the work instead of letting it play over me. I'm grateful to Kathy Dunn Hamrick for saving me from that work. It gave me the opportunity to be more present for the work with my brain turned off.

Think about that the next time you catch yourself thinking too much in the gallery or the playhouse or the concert hall. You aren't at work, so take your mind off the clock and see what happens.

All Over Creation: When the Truth Hurts
After suffering through a friend's lousy show, is honesty the best policy?