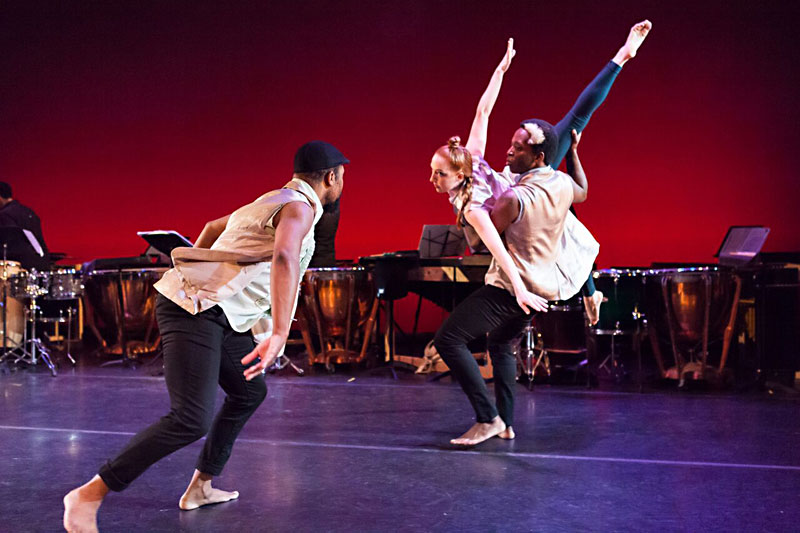 In her preshow address, wearing rolled-up jeans and a pair of oxfords with well-worn toes, Kathy Dunn Hamrick assured the audience that there was nothing to "get" in More Than One Complication, a nonnarrative dance she created with contributions from guest choreographers Kate Warren, Lisa Nicks, and Charles O. Anderson. "You can just people-watch for the next hour," she said.

To people-watch is to watch actively but without overt engagement. In people-watching – and in its listening counterpart, eavesdropping – we don't worry about reflexivity: whether or how others are watching us. We are free of the need to comment, to clarify, to argue, to retweet, to show that we are paying attention. In fact, people-watching is done most smoothly when it doesn't look as though we're paying attention. Hamrick's permission to detach – to be voyeurs, lurkers – was a welcome reprieve.

The work gave us plenty to watch: the eight dancers of the Kathy Dunn Hamrick Dance Company, and, lined up behind them, the line upon line percussion trio with an additional three guest percussionists, each surrounded by the array of instruments they would need to perform Iannis Xenakis' 1978 Pléïades. The color palette, inspired by the instruments and warmly lit, was based in malachite and metals, shaken up by the dancers' powder-puff pastel tops and playful hairstyles. At times, groups of dancers, moving in relational patterns like gears in a common machine, spanned the stage. At others, soloists moved in a quick-slow cadence, seeming to mirror the strike and resonance of each percussive sound. The music and the dance were joined only during the final week of rehearsals, but, as often happens with this kind of process, it was difficult to imagine the dance without the music.

Late-stage meshing of elements ensures that a work will be something beyond any of its creators' intentions, and More Than One Complication, an ensemble piece through and through, was a low-ego zone. It was impossible to determine which of the four choreographers made which part of the dance (though one could guess — like the game of hypothesizing about the lives of passersby). Despite the mathematics that underpin Pléïades, Xenakis allowed for variances in the order of its four movements.

The people-watching approach gave egos in the house a rest, too. The astute people-watcher might have noticed how the musicians bent their knees in synchronicity before lowering their mallets, or how the soles of the dancers' feet brushing against the floor made the work's final sounds, but might not need to comment on either.

More than One Complication