"Colby Bird: Hope Goes With Man to the Foot of the Gallows" 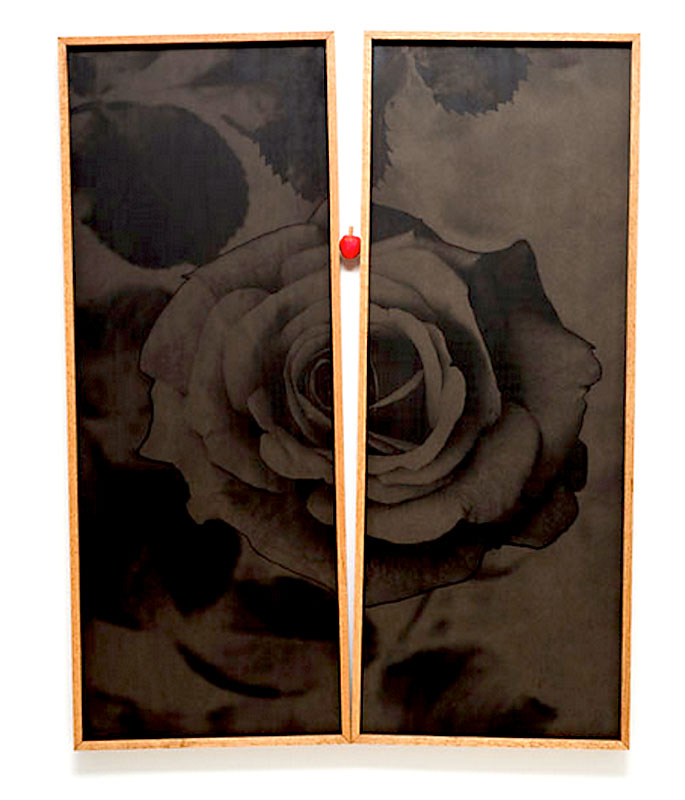 The most compelling exhibitions a viewer finds at Lora Reynolds Gallery are concise, punchy, polished, and layered. Austin native Colby Bird delivers just that in this fourth solo show at the most elite commercial gallery in his hometown. Comprised of only half a dozen works, the exhibition is a complex study in the long-lived themes of permanence and mortality, each played over an undercurrent of more contemporary, personal concepts of labor, value, and self-worth.

Five of the six works follow the same formula: a photographic negative of a classical subject is scanned and printed approximately six by four-and-a-half feet, then layered with wood stain to achieve a dark, uniform, sumptuous texture. The image is split, and each section is imperfectly framed in wood, then arranged in a manner on the wall to squeeze a carved wooden piece of unidentifiable fruit. The sixth work is the first and the last a viewer sees, an arrangement of these fruits alongside their natural, edible counterparts atop a standard gallery pedestal. Aptly named A Burden, this work requires the continual participation of its keepers. The fruit ages, bruises, and wrinkles next to its unchanging pristine counterparts, and must from time to time be replaced by other fruits of the keepers' choosing.

The importance this work places on labor is echoed by the curious frames of the others. Born out of the artist's self-doubt in regard to how others might perceive his work ethic and the bizarre economic structures surrounding art, Bird crafted his own frames for the images, taking a certain amount of solace in the labor of a more direct exchange system. Deepening the importance of those fine, but imperfect frames (an exposed screw here, a glue stain there) is the addition of entirely hidden sculptural elements on the reverse of the image. Title notes allude to brass newspaper holders, similar to those found in libraries, and editions of publications from the time and place that the photographs were originally taken (New York, Dortmund, Austin).

These frames seem heavier with that knowledge, and it's easy to imagine actual fruits in place of the wooden ones rotting, compressing, even exploding under the combined pressures of time and weight. The temporal quality of that hypothetical is found again in the classical subject matter of the photos: a flower, a lit candle, a young nude woman, a fragile statuette, and raw meat. As though these were not enough to drive the point home, small lit candles are placed around the gallery, leaving pools of wax on the floor and occasionally burning themselves out.

In that half-lit space, the contrast between life and an image of life becomes visceral. Each work is a frozen depiction of a subject that has inevitably aged since the photo was taken, and lost some of its former freshness. The false fruit too almost acts as a three-dimensional photo — not because of its realness, but because it does not change with time. The fruit's vibrant coloring taken directly from a color checker (a tool used in photography) supports that connection to frozen life and simultaneously again references unseen labor.

The value of the exhibition is its potential to drop its viewer down any number of rabbit holes. The concepts that seem most well fleshed out though, the ideas invoked by the works that have the most staying power, are equal parts pessimism and calls to seize the day: Whatever is permanent is fake or unimportant, only an illusion of truth, yet whatever is impermanent is eventually a burden, something that requires constant upkeep and inevitable, cyclical sorrow.

"Colby Bird: Hope Goes with Man to the Foot of the Gallows"