An Excerpt From Blackout 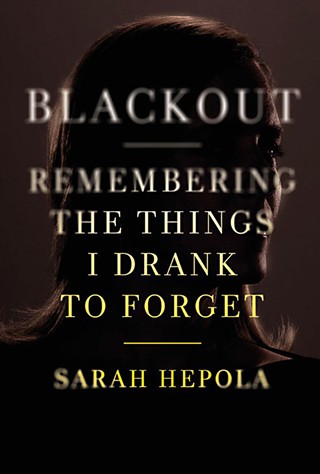 In the fall of 1993, the accidental lumberjack look was like a uniform at UT. I'd borrowed a gray flannel shirt and jeans flecked with paint from my father, and I loved how those jeans slid down my hips. I had to keep yanking them up, like a tiny girl in a giant's clothes. I tied the flannel shirt around my waist, which was a casual camouflage for my college weight gain. It's a little hot in here. I think I'll just completely block your view of my ass.

Growing up, I'd struggled with shyness and a body consciousness so extreme I skipped pool parties for nearly a decade, but alcohol helped. Oh my God, it helped. Behind my fortress of empty beer cans, I was safe from fear and judgment. Alcohol loosened my hips, and pried open my fists, and after years of anxious hem tugging, the freedom was incredible. Booze gave me permission to do and be whatever I wanted. It felt good to pee in alleyways, letting my bare feet sit there in the splash. It felt good to face-plant in a patch of grass or on the plush gray carpet of our apartment. It felt good to jump up on the couch and whip the flannel shirt from around my waist and lasso it over my head.

I had been hanging out with this guy named Dave. He was one of the many male friends I never slept with, and I couldn't tell if this was a tribute to our closeness, or evidence of my supreme unfuckability. I loved being close to men, and counseling them through their ill-advised one-night stands, but part of me wondered: Why not me? Am I just not hot enough for you to imperil our amazing friendship?

Dave and I liked to get drunk together and make each other laugh. Our nights were a game of comedic one-upmanship. One night he and I were walking across the near-empty gardens of Oktoberfest when a 70-year-old man in lederhosen approached us, and I lifted up my shirt and flashed my bra. No warning, no prompting. Just: So wrong.

Dave almost fell to the cement he was laughing so hard. I got so high capsizing him this way. Because if I couldn't be the girl he loved – that would be my roommate Tara – then I needed to be the girl who brought him to his knees.

Dave was a bourbon drinker. Jim Beam. Maker's Mark. Evan Williams. I had never cared much for liquor. To be honest, I was afraid of it. I liked the butterfly kisses of a light lager, which whisked me off into a carefully modulated oblivion, and bourbon was like being bent over a couch twenty minutes into your date. But Tara started drinking bourbon, and obviously I had to follow. I sauntered up to those amber bottles, and I learned to swallow their violence. Do that enough, and you will reorient your whole pleasure system. Butterfly kisses become boring. Hit me, motherfucker. Hit me harder this time.

We were on a road trip to Dallas for the Texas-OU football game when I went off the rails. I never liked football. I hated the rah-rah gridiron nonsense that defined my alma mater and my home state. But Tara and Dave had insignia clothes and koozies and all that shit. One Friday afternoon, everyone piled into a friend's Ford Explorer, and I had little choice but to join. The only fate worse than football was being left behind.

Dave was sitting in the passenger seat, controlling the flow of music and booze. He mixed Jim Beam and Coke into plastic cups big enough to swim in.

"Don't drink this too fast," he told me.

"I won't. I promise," I said, which was not true. I couldn't help drinking fast, because that's how I drank. I was a natural-born guzzler. I was already on my second giant cup when we stopped at a gas station 45 minutes outside Austin, and when I stood up, all the booze whooshed through my system. I was like one of those poker players in a Western who gets up from the table and falls over. The last thing I remember is standing outside the bathroom unable to light a cigarette and some helpful person pointing out that it was in my mouth backward.

The next four hours are gone. Blank spaces in my mind. My parents were out of town that weekend, thank God, since I woke up in their house in Dallas, snuggled up in my childhood bed, naked and shivering, with a poster of James Dean pulled off the wall and covering me like a blanket. Something had gone badly wrong.

Tara was the one who told me. She called the next day, and she had a frost in her voice. "People are a little upset right now," she said, and I twirled the phone cord tightly around my index finger, watching the tip turn red, then white. It was no small feat, turning a group of binge-drinking tailgaters against you.

The story I could not remember would be told many times. We had just reached the city limits of Dallas when I decided to moon people. The mooning scene is a staple of Eighties sex comedies – the Animal House genre of films about prep school boys busting out of their conformist youth. And I'd like to think I was paying tribute to those classic films. Except I botched a few key details. One is that I was surrounded not by like-minded brothers but irritated college friends who were not nearly so cross-eyed with drink. Another is that the mooning scene in those films took place while the boys were hurtling along a highway at night, and mine took place in five o'clock traffic. Yes, I mooned cars in a bumper-to-bumper snarl down the interstate, which is a little bit like mooning someone and being stuck in a grocery line with them for the next 10 minutes. Hey, how's it going? Yeah, sorry our friend is mooning you right now, she's really drunk. Excited about the game?

But the third and most critical difference is that I was a girl. And for a girl, there is good nudity (boob shaking, leg spreading) and then there is bad nudity (sitting on a toilet, plucking hairs from your nipple). Pressing your wide white ass up to the window of a vehicle in broad daylight is definitely in the column of bad nudity.

The next week was a humiliation buffet. There are times when you want to die. And then there are times when one death is simply not enough. You need to borrow other people's lives and end them, too. While this story would become funny in time, I can assure you in the moment, I believed I only had two options. Destroy everyone in the car. Or never drink bourbon again.

I quit brown liquor that day. Never again, I told myself. Not every catastrophe can be solved so easily, but this one only took a simple snip, and I was allowed to stay on the good-times van for many more years. Everyone forgave me, which is the grace of college. We all had dirty pictures on each other.

In Which We Remove Foot From Mouth, Mind From Gutter
A Freudian slip from the one-track mind of Sarah Hepola. 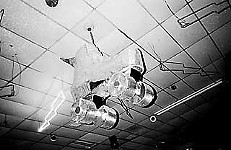 Public Notice
Austin's wheely hot this week and next with these fine skating fundraisers!