Recall, if you will, the 2004 presidential election. On what turned out to be the losing side, there was John Kerry, labeled a heady New England elitist, and on the other was George W. Bush, who achieved re-election despite what many judged to be an inability to articulate ideas of any complexity. It's hard to explain how that happened. Even today, many people – progressives, mostly – mock Bush for his perceived shallowness and intellectual weaknesses.

Enter Mickle Maher, the fiercely intellectual Chicago playwright, and his play The Strangerer, in which he places Bush's apparent bafflement within the context of the challenging work of French existential writer Albert Camus, and creates a play that takes place during a 90-minute debate between Kerry (Ken Webster) and Bush (Robert Pierson), moderated by Jim Lehrer (Jason Phelps).

The concept is hugely ambitious, as are most of Maher's plays, and ultimately it's not something that parses in the way of most theatre. Under Mark Pickell's direction, Capital T's production seems about as clear as a staging of a script like this can be. As a narrative structure, the debate is merely a launching point for Bush's philosophical soul-searching through the ideas explored in the major works of Camus: murder, mortality, the creation of meaning, and so on. The tension sustained from beginning to end is between Bush's inability to explain the reasons for his character's actions and his character's driving desire to create meaning out of what appears senseless.

It is important to note that all three men in the play are characters that draw from the historical figures, but are more useful here as tools to demonstrate the problem of reconciling conflicting understandings of our own existence. (Like I said: hugely ambitious.) We see Pierson's portrayal of Bush's squint, and Webster affects a little of Kerry's artificial air. But close impersonations perhaps would not have been as valuable as the looser portrayals that the cast pursue, because the entire story of the play is essentially unmoored. An SNL-style parody would have failed in the face of a plot whose relationship with reality is distant at best.

The purpose here is not to mock Bush any more than he already has been, nor is it to demand rhetorically, once again, why Kerry could not pull off a win in 2004. It's to make use of Bush's apparent dunderheaded confusion to demonstrate that we are all frankly lost in the face of the meaninglessness that Camus conveys through his fiction.

The Strangerer is a fiercely intellectual exercise. It lacks much of the active staging that drove other Capital T productions of Maher's plays, but it's not without value or humor. And like those other plays, it defies expectations. 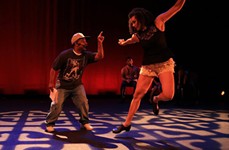