Trouble Puppet's The Wars of Heaven, Part I 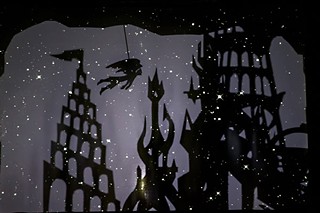 The show opens with two Russian soldiers taking shelter in the rubble of Stalingrad as the Nazis lay siege. At first, they're just two soldiers complaining about the hell of war. Except the heads of these puppets reveal that they are demonic soldiers. Which is interesting, because they do, in fact, belong in hell. They don't seem thrilled with the idea.

Trouble Puppet's newest production is an original story with strong roots in Milton's Paradise Lost, the 17th-century epic of Satan's rebellion against heaven. Its contemporary spin goes beyond the casual and profanity-laced dialogue. In this epic, Lucifer is female, as are the other demons, who insist that rather than being cast out from heaven, they chose to leave. They rejected the divine, male authority of God the Father in favor of independence and self-worth. The angels who stayed loyal to heaven are male.

Moreover, the lead characters of this play are not Lucifer, Michael, or God the Father. They're just two anonymous foot soldiers who have spent millennia in the trenches of a war between the angels, which has encompassed every significant human conflict since the beginning of history. And they don't always take the sides one might expect. In the opening scene, it's revealed that the Nazi sniper that the demons are hiding from is actually a heavenly angel, fighting on the side of fascist totalitarianism.

Once the sniper and the older of the two demons recognize each other, they stop shooting and enjoy a friendly reunion, baffling the younger demon. The pair explain that they've fought each other in so many conflicts that they finally decided to just stop. It wasn't like killing each other was making a difference; they would simply meet again on a later battlefield, in a technicality which isn't really explained but sounds sort of like the way video game enemies re-spawn. Instead, they have declared a private truce.

The truce becomes the most interesting aspect of The Wars of Heaven. In making the rebel demons females who are fighting an authoritarian, apparently merciless god, an audience located in a culture of individualism and nominal (if not actual) gender equality is likely to sway to the side of those traditionally viewed as evil. Throwing the audience off-balance is useful, but in itself it is not as profound as the questions raised once the angel and demon have decided to stop fighting.

Specifically, what is the significance of quitting a rebellion? Does it mean you're giving in to the forces you've been fighting, or does it mean you're taking a third stance altogether? And if it's just two beings who have agreed to quit the senselessness of warfare, does it matter? Is it enough, or should they try to recruit others to their pacifism? One assumes that part II of this proposed epic trilogy will begin to offer answers to these questions.

As always, Trouble Puppet recruits a strong ensemble of performers and designers. The music by composer Justin Sherburn especially is a remarkable aspect to the play, with recorded contributions from the ensemble Convergence. Artistically, the production uses tabletop puppets, which have been Trouble Puppet's bread and butter, and it also makes heavy use of shadow puppetry. Over the course of the company's life thus far, Artistic Director Connor Hopkins has set a trend of challenging himself and the company with more and more complex ideas. If this trend continues, it will be interesting to see what ground this epic seeks to explore.

The Wars of Heaven, Part I