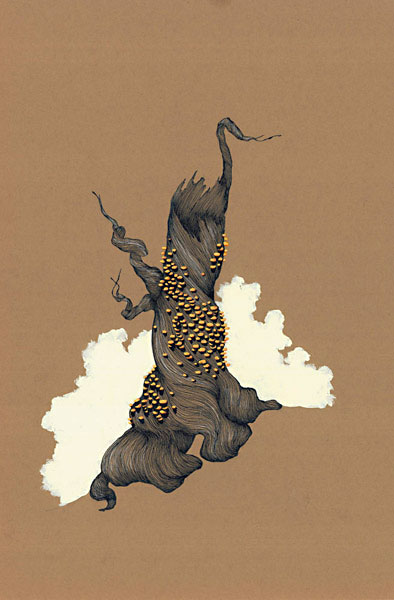 Austin Chronicle: How has your work changed since you've become a parent?

Jana Swec: It wasn't until I had my first child that I started drawing my trees. I used to really believe that the art that I made should have more of a political stance or meaning to it. Why else would I make it? It needed to have some greater public purpose. But once I had kids, I spent more of my "free" time making work that was more about finding quiet and a sense of flow while creating. Parenting is mentally and physically exhausting. I found the only time I could relax and calm my head was when I worked on these very meditative, repetitive drawings. I couldn't explain necessarily what they meant, but the process of making them was what my body needed. This work didn't seem to have the same purpose that I previously had tried to achieve. I let the stifling pressure go. Previously, I'd get so hung up on the meaning of the piece and not be able to move forward. Once I started to make art that was more about my personal needs, I found more enjoyment in the process. I realized that the purpose of art can sometimes just be what the artist needs in that moment.

When I first started making the trees, they had such a different meaning for me than they do now. I was nervous to put them out in the world for there was something very sexual and sensual about them that I knew I'd have to discuss. It may sound strange to say, but I was a bit turned on by this new work, these undulating trees. Once I finally exhibited them, I found that people really enjoyed talking about them as well. Maybe people just want an excuse to talk about sex, but I think people also find it liberating to see others express a more private side of themselves and not be ashamed about it. That's where the trees started; maybe they're why I have so many kids!

Swec's role in WEST is producer rather than artist, but of the artists showing in the tour, she recommends two others juggling the roles of parenting and making compelling art: Virginia Fleck (172) and Laura Latimer (14).