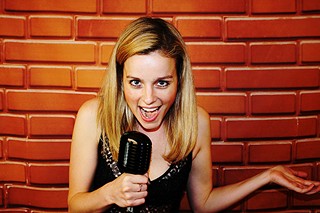 Comedian and actress Erica Rhodes dropped out of college. (Twice.) She worked at a medical marijuana clinic in Los Angeles. And she's performed with A-list celebs, like Meryl Streep, on A Prairie Home Companion. To this eclectic biography, she will soon add a Moontower Comedy & Oddity Festival debut of her uniquely sweet (but twisted) brand of comedy. You'll want to see this.

Rhodes got her start in comedy at the age of 10, performing with the radio show A Prairie Home Companion. She has a distinctively high-pitched and cute voice, which she says at 10 sounded more like the voice of 4-year-old. The show's host and writer, Garrison Keillor, loved it immediately. "[Garrison] wrote this really great part for me," says Rhodes. "The part was his conscience. I told him things like, 'You need to call your mother' and 'You need to read Moby Dick.'"

She grew up doing the show and continues performing on it today, voicing a variety of different characters that have a lot in common with her in real life. "One of my favorite sketches is the diary sketch because [Keillor] developed it around me," says Rhodes. In it, she recites the internal monologue of a young girl as she writes in her diary. "I really liked doing it because I often co-wrote it with him," says Rhodes.

Along with her Prairie Home activities, Rhodes co-created a web series called Apt. 45. "It was right when YouTube started. It was also during the writers' strike," says Rhodes. "I had just moved to L.A., and I had one friend. And we weren't really the party type. We were more introverts." They decided to fill their time writing and filming the series. Rhodes played the role of an aspiring actress. "My character was based on me, and I was trying to rope my non-actress neighbor into being an actress, too, even though she had no experience and wasn't really interested in it," says Rhodes. Rhodes' character takes on the role of acting coach, telling the neighbor, "You can either be really skinny or really funny. Those are your two options." Turns out, the neighbor isn't very funny, leaving Rhodes to ask, "Okay, how much can you lose?"

Rhodes has starred in several indie films and another YouTube web series, The Upstairs Girls. (Several episodes of that have received a few million views.) But most recently she's been focusing on her stand-up, which she describes as "very autobiographical." "It's very personal," says Rhodes. "All my stand-up is truthful." In reference to some of her material, she explains: "I really did drop out of college twice. I really did work at a medical marijuana clinic."

It's no surprise that Rhodes has turned her attention toward stand-up. It seems a natural progression for her, given the similarities between her and many of her characters. "I love writing, and I feel like I'll get to reveal my own voice with stand-up," says Rhodes. "With acting, you don't always get to speak your mind or have your perspective known. I really like stand-up because I get to be myself. I never feel like I fit in any other place. I think a lot of stand-ups feel like that. That the only time they can be themselves is if they're totally in control of what they're writing and saying. Stand-up is a perfect outlet for me."

Rhodes' comedy blends the sweet candor that marks many of her characters, like those on A Prairie Home Companion, with a slightly dark side. For example, her father is in a wheelchair. After a punch line in one of her stand-up routines, Rhodes slips in the line that her father should "roll with" the joke, rather than "run with" it. It's funny, but a bit jarring. "People are used to the daughter making fun of the father," says Rhodes. "But not when the father has a neurological disease. It's something we relate to, but at the same time is a little twisted."