The debut of this new dance fest offered a range of interesting work, the best being fluent in musicality 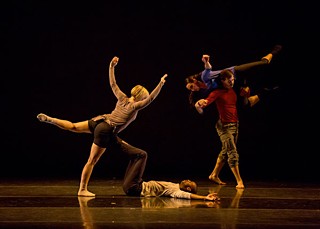 
For a city crazy with festivals, our dance festival history is kind of shaky. For much of the past decade, we enjoyed Hot September Flurries and then Big Range Austin Dance Festival, thanks to Ellen Bartel's Spank Dance Company. We also had annual mini-festivals: the one-hour Dance Carousel, also produced by Bartel, and 10 Minutes Max, put on by Phyllis Slattery's Dance Umbrella. But since 2012, when Slattery passed away and Bartel refocused on teaching and choreographing, Austin dancemakers have been going without those low-cost opportunities to float new dances and connect with others from near and far. It's this gap that Kathy Dunn Hamrick Dance Company sought to amend by presenting a one-day festival of three concerts showing a total of 23 short works of contemporary dance (chosen from three times as many submissions), with conversation hours (hosted by a start-up called Human Stage) in between. Though I was able to attend only the final concert, several people I ran into had been hanging around the theatre all day.

All of the eight works in the concert were danced to music, which begged questions of who was listening to it, and how? In Guts, a hair-whipping duet by Austinite Alyson Dolan for herself and Lisa del Rosario, who were accompanied onstage by a vocalist, Alfredo Ramirez, and a percussionist, Drew Silverman, the relationship between the movement and the sounds wasn't always clear. Who's on first? The dancers from Contemporary Dance/Fort Worth echoed this question in an excerpt from a work called The Butterfly Effect and Other Beautiful Catastrophes. With Wii remotes in their hands and tucked into their socks, they shared the stage with sound designer William Meadows and his laptops, demonstrating (albeit haphazardly) the difference between movement's response to sound and sound's response, via the electronics, to movement.

The best dances were fluent, rather than conversational, in musicality. The Houston company MET Dance brought Seven, by New York choreographer Larry Keigwin. To rolling Spanish-inflected guitar and accordion (a recording by Manyfingers) and dressed in comfy leggings and tees, the ensemble (of eight, actually, quite intriguing dancers) weaved among one another and synchronized just in time to catch its soft syncopations.

While Seven was illuminating but trustworthy, Joshua L. Peugh's Slump, performed by Peugh and his Dallas-based Dark Circles Contemporary Dance, bloomed with surprises. With impeccable timing and comic aplomb, four couples dressed for a garden party got quirky to old music – Klezmer, Yma Sumac, Ella Fitzgerald – while rewriting the codes of social dance. Slumping, flailing, and jiving, they interlocked with the music: Its gears and theirs were part of the same machine.