Forklift Danceworks' latest connected care for urban trees, a neighborhood's life, and all of us to nature 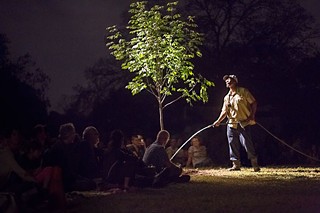 
How often do you go to a dance event and get to see a tree get planted?

That may seem an odd activity to include in a choreographic production, but the latest from Forklift Danceworks was all about our forest friends – what trees give us and what they need from us, how we take joy from them and how we tend them. Indeed, at center stage throughout was a monumental heritage pecan, which stood regally in the beams of Stephen Pruitt's lights as workers from the city's Urban Forestry Division moved around its trunk, under its limbs, and through its crown.

As with The Trash Project and PowerUP, Forklift's prior collaborations with the city of Austin, The Trees of Govalle used the daily duties of municipal workers as the basis for movement set-pieces. So we were treated to a chainsaw corps de ballet, a wheelbarrow promenade, a mulch-raking hoedown, aerial dances in the upper branches, and more. These inventive interpretations of everyday actions – chiefly the work of Forklift Artistic Director Allison Orr and associate choreographer Krissy Marty – could be unexpectedly tender and elegiac, as during a brush-truck pas de trois, in which each truck employed its claw to gently pass a tree trunk from one to another, and a sequence in which a worker soberly walked the grounds pulling a large limb behind her as another worker's recorded voice told of his sadness in dealing with dying trees. As they have in Forklift's other works, recordings of employees talking about their work expanded our sense of what they do and what it means – not simply in the context of their jobs, though that's always illuminating, but to them personally; the voices revealed the dedication, pride, and sense of service in these men and women. What they do isn't just to collect a paycheck; these are their vocations – for some, even callings. These elements all evoked the familiar fascination, wonder, and admiration of Forklift's past shows.

What was new this time was the inclusion of neighborhood voices alongside those of the arborists, park rangers, and maintenance crew members who serve the trees of Govalle. In past works, Orr has kept her focus on the civic servants whose efforts too often go unseen. But for this project, she chose to also highlight part of the city that too often goes unseen. Linking the work that goes into keeping Austin's trees healthy and thriving with personal memories of the trees of Govalle Park and its neighboring communities by longtime residents Sylvia Donley, Johnny Limón, and Pete Rivera opened our eyes to the natural beauty and rich character of this Eastside neighborhood and enriched our sense of how these actions we were watching make a difference in the life of a community, helped us see the life of that community from a perspective more like a tree's: spanning generations.

And the more we watched and listened, the more powerfully we felt that immense pecan tree as a living creature, something with its own vitality and drive. In one of Pruitt's most gorgeous effects, waves of lights rolled across the entire tree, making it appear to breathe. And when workers in the tree bounced from limb to limb, making the whole crown shake, the pecan itself seemed to be dancing to Graham Reynolds' propulsive score (one of his most remarkable, too, boosted by outstanding trumpet playing from Ephraim Owens and heart-rending violin work by Alexis Buffum). With Orr setting work on living creatures, the sense of community her productions invoke expanded beyond the civic, beyond even the human, to encompass the natural world. So seeing that tree get planted, watching the hole being dug, the roots entering the earth, the base being watered, was like witnessing a birth, the beginning of a new life that will be a part of this world for generations. It felt like part of la familia, the family of Earth.